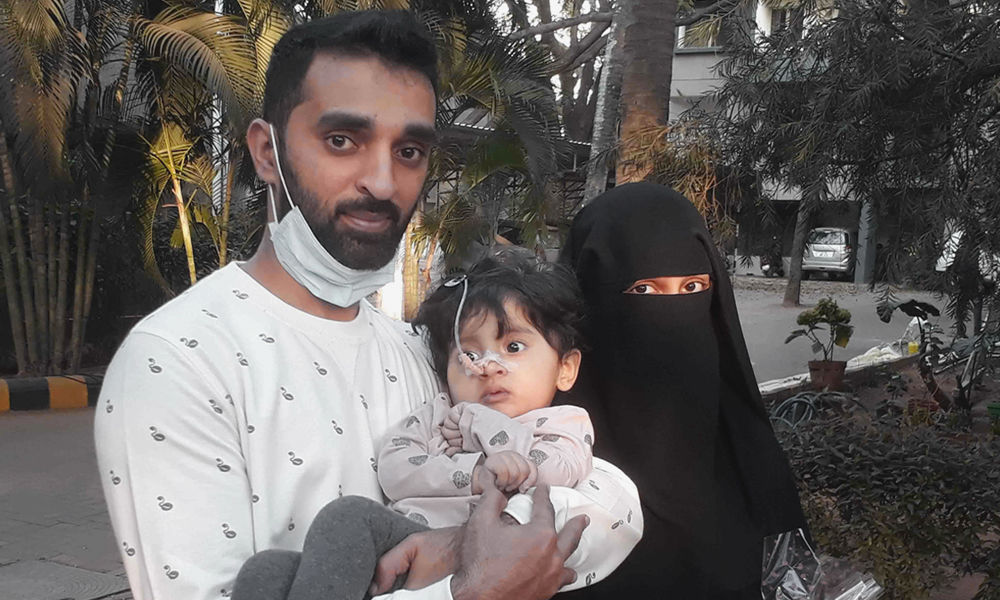 The daughter of Mohammed Basil and Khadija from Bhatkal town in the coastal Uttara Kannada district in Karnataka, emerged as a lucky winner of a lottery through a compassionate access programme by drug major Novartis, for the first time in Karnataka.

Fourteen-month old Fatima who was suffering from a deadly muscular disorder, Spinal muscular atrophy (SMA), has undergone a ₹16 crore gene therapy treatment after winning a 'lottery' that fetched her a new lease of life.

The daughter of Mohammed Basil and Khadija from Bhatkal town in the coastal Uttara Kannada district in Karnataka, emerged as a lucky winner of a lottery through a compassionate access programme by drug major Novartis, for the first time in Karnataka. This helped her receive the costly treatment which is affordable only by multi-millionaires, according to the hospital.

"The cost of this medicine is about 2.1 million US dollars, which is roughly about ₹16 crore," hospital Director (CEO) Naveen Thomas said.

The child was diagnosed with Spinal Muscular Atrophy (SMA), a disease caused by loss of nerve cells that carry electrical signals from the brain to the muscles.

The protein needed for this signalling is coded by a gene for which everyone has two copies -one from the mother and the other from the father, according to Thomas. He said a child develops this disorder only if both the copies were faulty and without treatment, this disease was ultimately fatal.

Her father, Basil, told media that the girl's condition was gradually improving, and she was even able to move her leg. "It will take time to become like a normal child," he said.

The couple had earlier lost a child, who was also afflicted with the killer SMA. Dr Ann Agnes Mathew, Consultant Paediatric Neurologist and Neuromuscular Specialist said that on the 21st day of the 21st year of the 21st century, the toddler was given the injection, which is a one-shot cure for this rare disease.

She added that in the previous year alone, 38 children who were getting treatment in the hospital died in the absence of this expensive treatment.

Currently, as many as 200 children are getting treatment in the Baptist Hospital which is specialised in genetic diseases.

Also Read: 'Similar To What Nazis Did During Hitler's Regime': HD Kumaraswamy Questions Marking Of Houses Of Ram Mandir Donors