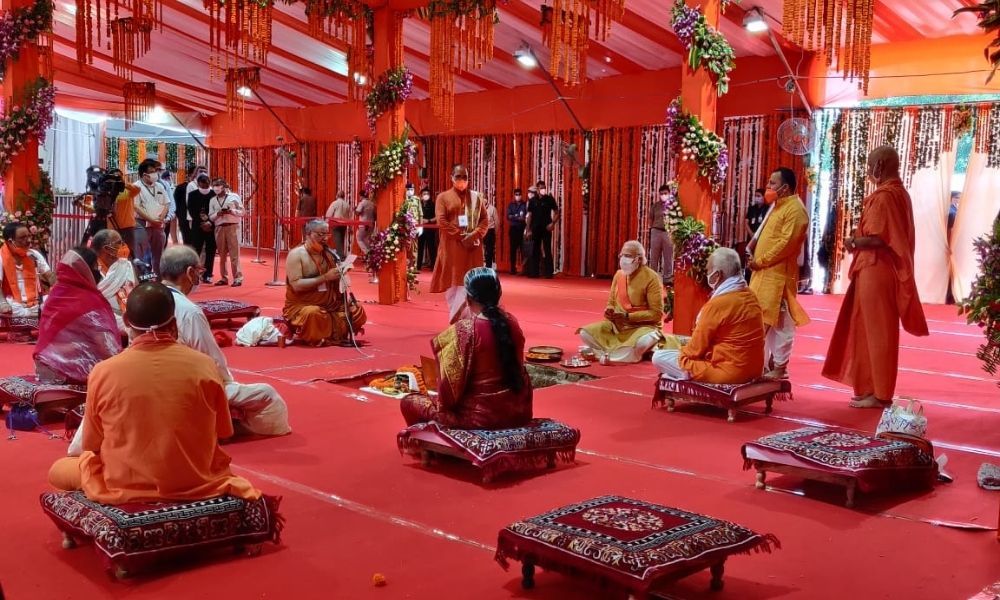 Leaders from the Samajwadi Party and the Aam Aadmi Party have alleged financial fraud in the purchase of land for the temple by the Ram Mandir Trust. The trust, however, has refuted the allegations.

Two major opposition parties — the Samajwadi Party (SP) and Aam Aadmi Party (AAP) have alleged crores of rupees financial fraud in the purchase of land for Ram temple by the Ram Mandir Trust established by the central government last year in Ayodhya.

What Are The Allegations?

According to both political parties, the transaction happened in March this year. The two leaders, AAP's Sanjay Singh and Pawan Pandey, former MLA of SP, alleged two real estate dealers purchasing a property from an individual for ₹2 crore and selling it to the trust for ₹18 crore — in a matter of few minutes on March 18, 2021.

Singh, who is the party's national spokesperson and state-in-charge for Uttar Pradesh, while addressing a press conference said, "The piece of land in Ayodhya is registered with number 243, 244, and 246. Its value is Rs 5.80 crore. It was purchased from Kusum Pathak and Harish Pathak by Sultan Ansari and Ravi Mohan Tiwari for Rs 2 crore. The purchase had two witnesses — Anil Mishra, a member of the Ram Janmabhoomi Trust, and Rishikesh Upadhyay, who is the Mayor of Ayodhya. It was purchased at 7.10 pm. In the next five minutes, the same land was bought by Ram Janmabhoomi Trust and Champat Rai for Rs 18.5 crore from Ansari and Tiwari. Rs 17 crore was transferred through RTGS," reported The Indian Express.

He also claimed that the stamp papers for the first purchase were brought at 5.11 pm and after 11 minutes at 5.22 pm, stamp papers were purchased for the second time.

SP's Pandey, on the other hand, questioned the two trustees' involvement in becoming the witnesses. "Did the land start giving gold that the price of land shoots up from ₹2 crore to ₹18 crore in a few minutes," he questioned during a press conference. The party demanded a CBI probe into the alleged scam.

The Ram Mandir Trust, in a statement, has denied any sort of wrongdoing or corruption in the sale deed. It said that the current sellers had registered an agreement years ago, and the sale deed was carried out on March 18 this year.

"After the Supreme Court order, a lot of people started coming to Ayodhya to purchase land, and as the UP government is also purchasing a lot of land for development works, the land price increased suddenly. The land on which discussion has started is very close to the railway station and therefore, is at a very important location. All the lands purchased by the Trust are purchased at a price much lower than the market price," the trust said in a statement.

Vishwa Hindu Parishad leader Champat Rai, who is also secretary of the Shri Ram Janmabhoomi Teerth Kshetra (the Trust), said that all the transactions related to the temple trust are available online and are transparent.

The Shri Ram Janmabhoomi Teerth Kshetra is a trust that was formed by PM Narendra Modi in February 2020.

It was established to oversee the construction of Ram mandir in Ayodhya after the Supreme Court awarded 70 acres of land in 2019. There are 15 members in the trust, of which 12 are nominated by the Centre.

According to reports, the trust had collected ₹1,511 crore through a donation drive, which began on January 15 and was concluded within a month this year, to build the temple in Ayodhya.