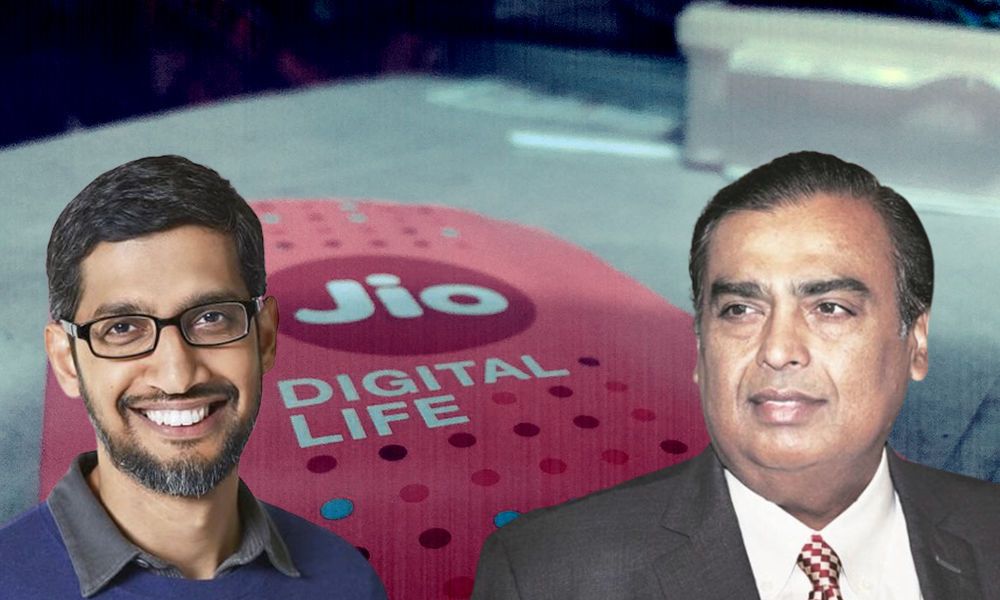 With Google, the company will develop an operating system based on Android to power this affordable 5G smartphone that the company plans to launch soon.

Reliance Industries Ltd (RIL) in its 43rd annual general meeting (AGM) announced that Google will invest Rs 33,737 crore for a 7.7 per cent stake in Jio platforms after all regulations are met.

With this, Google will be merging with partners like Facebook, Silverlake, KKR, TPG, Intel and Qualcomm, among others.

Google said that it will be investing $10 billion (Rs 75,000 crores) in India over the next five to seven years to boost the country's digital economy. The company will be deploying these investments via a mix of investments and partnerships.

"This is a reflection of our confidence in the future of India and its digital economy," Sundar Pichai had said at the Google for India event on July 13.

RIL's Chairman & Managing Director, Mukesh D Ambani has announced that with Google's investment, Reliance has turned completely debt-free and will only be accepting strategic investments from now on.

Facebook was the first company to invest in Jio platforms back in April. The announcement was made that the American giant would invest $5.7 billion to get a 10 per cent stake in Jio platforms.

During the AGM, Ambani announced that with this partnership, Jio will tie-up with WhatsApp to help India's small businesses connect with customers.

The multi-billionaire also announced that it has partnered with Google to develop and launch a new 5G supported affordable entry-level smartphone. With Google, the company will develop an operating system based on Android to power this affordable 5G smartphone that the company plans to launch soon.

With the help of Google's partnership, Ambani aims at making India 2G free.

"Reliance Industries, and Jio Platforms, in particular, deserve a good deal of credit for India's digital transformation. The pace and scale of digital transformation in India are hugely inspiring for us and reinforces our view that building products for India first helps us build better products for users everywhere. Google is proud to invest Rs 33,737 crore into Jio," Sundar Pichai, CEO of Google and Alphabet said.

"Google has empowered millions of Indians to access helpful information and, like Jio, is a force for change and innovation. We welcome Google onboard and are excited about our partnership for what it can deliver to Indians, from universalising Internet usage to deepening the new digital economy and providing a prime mover to India's economic growth," Mukesh D Ambani said.