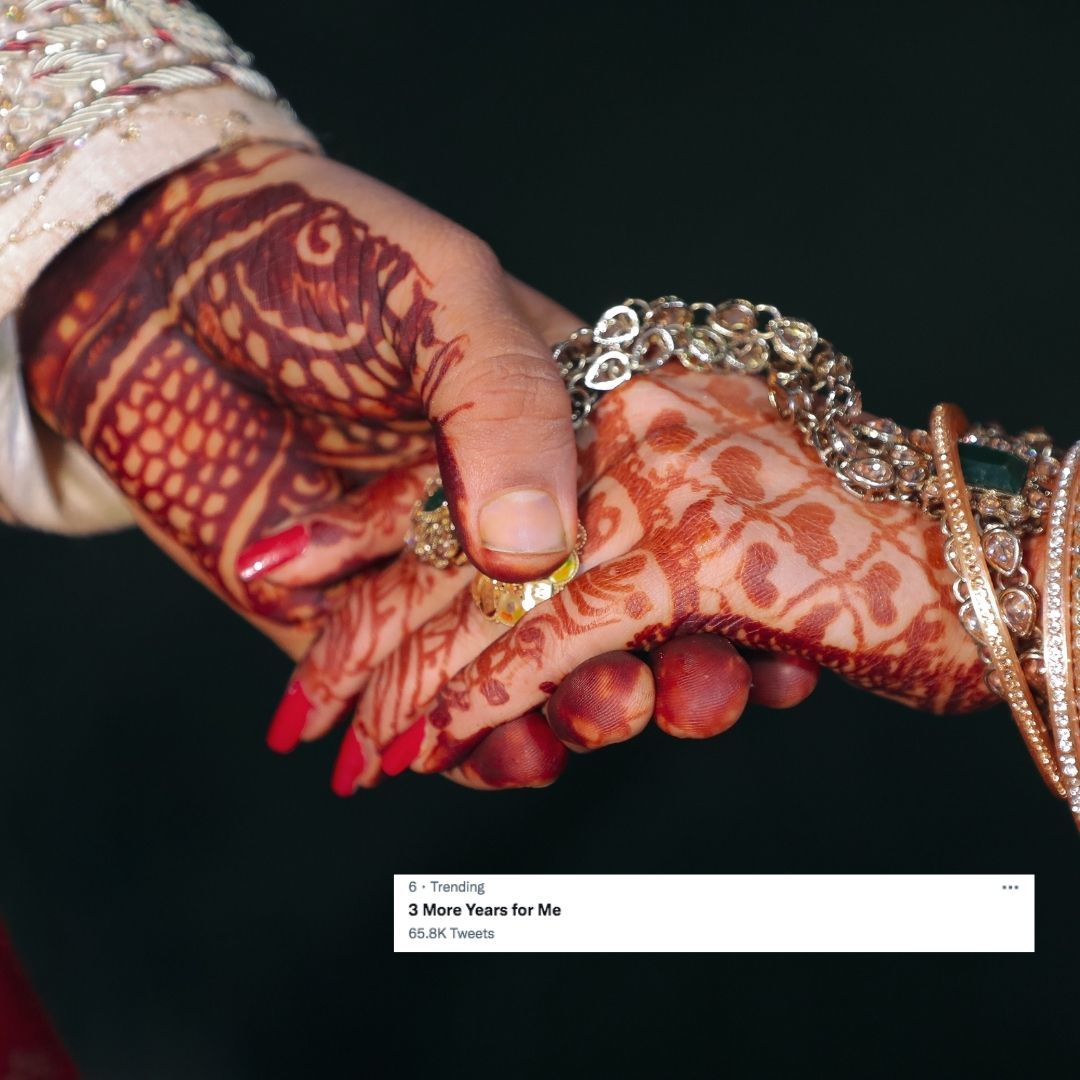 The microblogging site is buzzing with activity as several users give their two cents, supporting the bill that aims to promote gender equality and women empowerment.

In December 2021, The Prohibition of Child Marriage (Amendment) Bill was tabled in the Lok Sabha to increase the womens' legal marriage age from 18 to 21. Union Minister Smriti Irani introduced it to the house to ensure gender equality.

"We are 75 years late in providing equal rights to men and women to enter into matrimony. For the first time, through this bill, men and women, keeping in mind the right to equality, can decide on their marriage," The Indian Express quoted Irani's address to the Lok Sabha on the historical precedent.

The contentious bill has become the talk of the town. The majority of the public are hailing this move, as it will present more opportunities for young women before eventually settling down. In light of this, '3 More Years For Me' is trending on Twitter, where netizens are gunning for the bill to foster young women's holistic development.

Several women took to the microblogging site to share their thoughts on the bill. They stated various reasons to support the Central Government's move using the phrase. "To ensure the complete abolition of child marriages and child pregnancies, attitudes towards the girl child need to be changed & this can be achieved only with the backing of the proposed cabinet proposal on marriage age," a user named Ruhaana Malik said.

By increasing the minimum marriage age for women, government has ensured a safety net for women falling in the disadvantaged categories. This will not only promote equality but women empowerment too in long run
3 More Years for Me

Another user added, "We should get married at such an age when we can fulfil the responsibilities of our family as well as ourselves. Also, decide on marriage only when you find a better partner.

Raising The Question On Marriageable Age

Some Twitter users cited examples of prominent Muslim women who have made their mark. From Nusrat Jahan to Nargis, Zeenat Aman, Madhubala, Anisa Syed, Farah Khan Kunder, etc., Each of them got married after the age of 18. "Do you think she would have become a role model and an icon for women of women empowerment if she had married at an early age," the posts posed the critical question.

3 More Years for Me pic.twitter.com/ISin3a2ZbT

Apart from education, early marriages pose a problem in motherhood. "An early marriage is not only dangerous for mother but also the children born out of such marriages. An increase in minimum marriage age is a corrective step to right the wrong," another tweet mentioned.

Various field studies have suggested that increasing the minimum marriage age would lead to a reduction in gender-based violence in a significant way- a chronic problem faced by women everyday
3 More Years for Me pic.twitter.com/dV2y0SCDiF

According to the Hindustan Times, a 31-member examination committee is set up to look into the bill. With senior BJP leader Vinay Sahastrabuddhe spearheading it. TMC's Sushmita Dev is also a part of the panel, being the only woman. Several other women MPs such as Priyanka Chaturvedi and Supriya Sule asked the government to include more women in the committee.

Also Read: More Than Half Of Crimes Against Women From Uttar Pradesh: Data