People on social media while sharing this video claimed that the viral video is from Syria where non-muslim people have been shot dead who didn't observe the fast during the Ramzan festival. The Logical Indian fact check team verified the viral claim.

The viral video shows a group of men dressed in army fatigues shoving blindfolded men into a pit filled with bodies. These men are then shot and more men are shoved into the execution pit and shot. While sharing this video, it is being claimed that the viral video is from Syria where non-muslim people have been shot dead who didn't observe the fast during the Ramzan festival.

A Twitter user shared this video and wrote a caption which reads, "This is in Islamic Nation Syria..where those who have been shot dead are the Kafirs who didn't observe the fast during the Ramzan festival....A mass grave has been dugged and all those who didn't fast were blindfolded and shot dead and burrows in the mass grave. This is the idea of Islam and Sharia....No freedom to speak and live as you wish...but in India, things are reversed....Here Islamic Jihadis kills Hindus just for silly reasons and rape and murder their women." 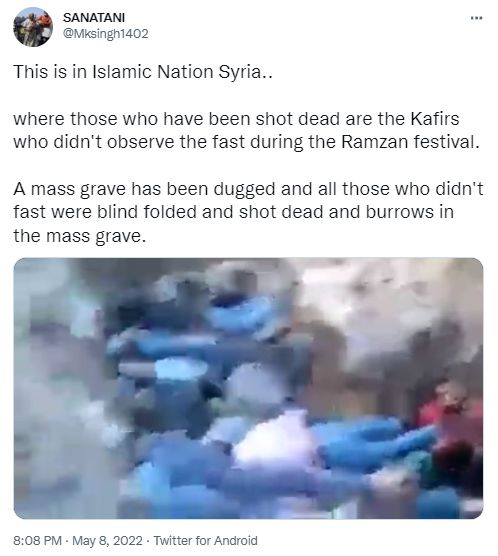 A Facebook user wrote, "This is in Islamic Nation Syria..where those who have been shot dead are the Kafirs who didn't observe the fast during the Ramzan festival....A mass grave has been dugged and all those who didn't fast were blindfolded and shot dead and burrows in the mass grave...This is the idea of Islam and Sharia....No freedom to speak and live as you wish….unlike India…where a foreigner… super PM…can call a democratically elected PM… "Mauth ka Saudhagar" and many other self righteous statements. Why can't we send them to Syria to lead a life as they wish in India and enjoy such freedom in that country." The Logical Indian Fact Check team verified the viral claim and found it to be misleading. The viral video is from 2013.

We conducted a keyframe analysis using InVid's Keyframe Analysis tool to isolate the keyframes. One of the keyframes led us to this report by The Guardian published on April 27, 2022. The report featured several screengrabs which matched up to visuals from the viral video.

The Guardian report carried several details about the incident shown in the video. As per the report, the executions took place in the Damascus suburb of Tadamon under the rule of the current president of Syria, Bashar al-Assad.

The war crime was carried out by the infamous enforcers, branch 227 of the country's military intelligence service with least 41 men were executed and thrown into the mass grave. The report stated that the video was date-stamped 16 April 2013.

We also came across this video report by The Guardian uploaded on April 27, 2022. Footage from the viral video can be seen from the 30 seconds mark:

The Guardian report found that it was difficult to identify why this group of civilians was picked out for execution. It might have been because of a collective punishment of any community that was linked to the rebels. As per the report, the video was a way of sending a lethal message to civilians in that area, to not switch to the opposition.

At least 41 civilians were executed by Bashar al-Assad regime forces in 2013 in Tadamon, near #Damascus, according to an investigation by The Guardian.pic.twitter.com/r5f9Cx3K9d

We conducted a keyword search and found an article by TRT World published on May 5th, 2022. The article detailed the war crimes that were carried out under the regime of Syria's Ba'ath Party and the leadership of Assad. For 11 years, Assad's regime has attempted to crush the insurrectionist movement in Syria.

The TRT World report mentions the chemical attack that took place in August 2013 in Eastern Ghouta which caused at least 1500 deaths. A week-long bombardment was carried out on August 20, 2012 in Darayya, a suburb of Damascus, where an estimated 700 people lost their lives in the air raids and at least 1,500 civilians were injured. The report also mentions one of the possible reasons that the Syrian regime had launched attacks against civilians, particularly in the case of Tadamon. As per this NPR report published on March 15, 2021, the aftermath of the Syrian civil war has created the world's largest refugee crisis. The brutal suppression of the rebellious movement in Syria has carried on since the Arab Spring of 2011. Over half of the country's people are displaced with 5.5 million refugees living primarily in Turkey, Lebanon, Jordan, Iraq and Egypt, as per the NPR report.

The caption of the viral video are relating executions to the communal clashes occurring during the recent Ramzan festival in India.

In actuality, the viral video dates back to April 2013 during which a brutal massacre took part in Syria's Damascus suburb of Tadamon. The video was published as a video report and an article by The Guardian in April 2022. The massacre of at least 41 men took place under the rule of the president of Syria, Bashar al-Assad.

The massacre was a part of one of the many war crimes inflicted upon the Syrian people in 2013 and might have been a way to warn against switching sides to the opposition. The viral video is not from the Ramadan fasts being observed in Syria as is inferred from the dates of the incident and the dates of Ramadan in 2013. Also, the video is not related to non-muslims shot dead for not observing fast during Ramadan. Hence, the viral claim is misleading.

Also Read: Does This Video Show Hindu Man Being Severely Beaten By Muslims In Rajashthan? No, Video Viral With False Claim