Did Taliban Hang A Man To Flying Helicopter? No, Here Is What Happened

A video is being shared with a claim that the Taliban has hanged a man to a flying helicopter. However, the man suspended was trying to hoist the Taliban flag.

The Taliban took control of Afghanistan after the United States (US) withdrew its troop on 30 August 2021, marking an end to 20-years long conflict. The US troops abandoned their military equipment, which the Taliban has taken over. Reportedly, the Taliban paraded with the captured US military hardware to celebrate the US withdrawal.

Amidst this, a video of a Black Hawk helicopter flying over Afghanistan's Kandahar is being shared, claiming that the Taliban has hanged a man, presumably a US interpreter, to a flying helicopter. Sudhir Chaudhary, the editor-in-chief of Zee News, shared the video on Twitter and wrote, "Another landmark picture taking the world in a new era of terror. Taliban hang a person, presumed to be an American interpreter, from a U.S. Blackhawk helicopter. The leftover US helicopters will now be used in #Afganistan like this." Shiv Aroor, an editor at India Today, shared the video on Twitter and wrote, "Remember that scene from Scarface? Well, the Taliban has done the same with an American helicopter in Kandahar, according to news reports..." He added a link to India Today's report on the incident. Now, the Tweet is unavailable. View archive here.

Several international personalities have also shared the video with the same claim.

Liz Wheeler, an American author, shared the video on Twitter and wrote, "If this is what it looks like… the Taliban hanging somebody from an American Blackhawk… I could vomit. Joe Biden is responsible."

If this is what it looks like… the Taliban hanging somebody from an American Blackhawk… I could vomit. Joe Biden is responsible.

Ian Miles Cheong shared the video and captioned, "The Taliban are hanging a person, presumably an American interpreter or SIV, from a Black Hawk helicopter. You cannot reason with terrorists."

The Taliban are hanging a person, presumably an American interpreter or SIV, from a Black Hawk helicopter. You cannot reason with terrorists. pic.twitter.com/P78O1RvQ1I

Taliban hanged a US interpreter to a Black Hawk helicopter in Afghanistan's Kandahar.

The Logical Indian Fact Check closely observed the video and found the claim to be false.

We used specific keywords in Pashto to locate the video on Twitter. It led us to a few tweets that were related to the shared video.

Bilal Sarwary, an Afghan journalist, replied to a Twitterati. He said that he knows the Afghan pilot who is flying the Blackhawk helicopter. He also mentioned that the man suspended in the air is trying to install a Taliban flag.

If this is what it looks like… the Taliban hanging somebody from an American Blackhawk… I could vomit. Joe Biden is responsible.

We found the video posted on Facebook by Afghan citizens captured from different angles. The video is captioned in Pashto, the English translation of which reads, "Kandahar: The IAA tried to hoist its flag at the governor's office with the help of a helicopter but was unsuccessful." This video clearly shows the man moving his arms and hovering around a pole holding something in his hand. It seems that the man is probably trying to install a Taliban flag.

We also found the video posted on Twitter by Afghan citizens captured from different angles.

We closely observed and found that the man is showing body movements and is alive. He is wearing a harness which is mistaken as a noose around his neck. 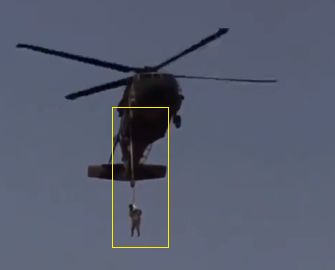 The fact-checking website Alt News contacted the news agency. Asvaka told them, "We have a team there, they have confirmed that the person was controlled and hanging from the helicopter to fix the flag at the governor's building in Kandahar."

Furthermore, the BBC reported the incident and clarified that the man seen is alive, waving the Taliban flag and wearing a Blackhawk helicopter's diver's winch. Several Afghanistan experts, citing Taliban sources, have told the BBC that the flight attempted to fix a flag over a public building using their recently-plundered US-built equipment. 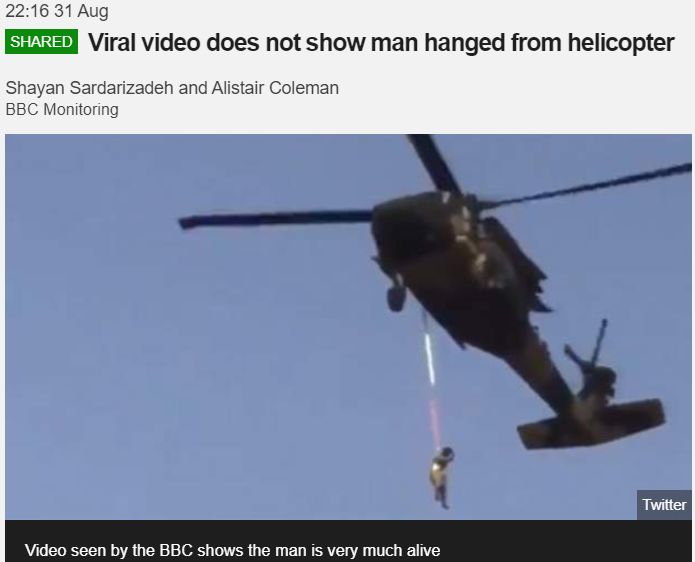 To sum up, the video is shared with a false claim. The man suspended in the air was trying to hoist the Taliban flag at the governor's building in Kandahar.

Also Read: Did Indian Army Soldiers Faint After Getting Covid Vaccine? No, The Viral Claim Is False