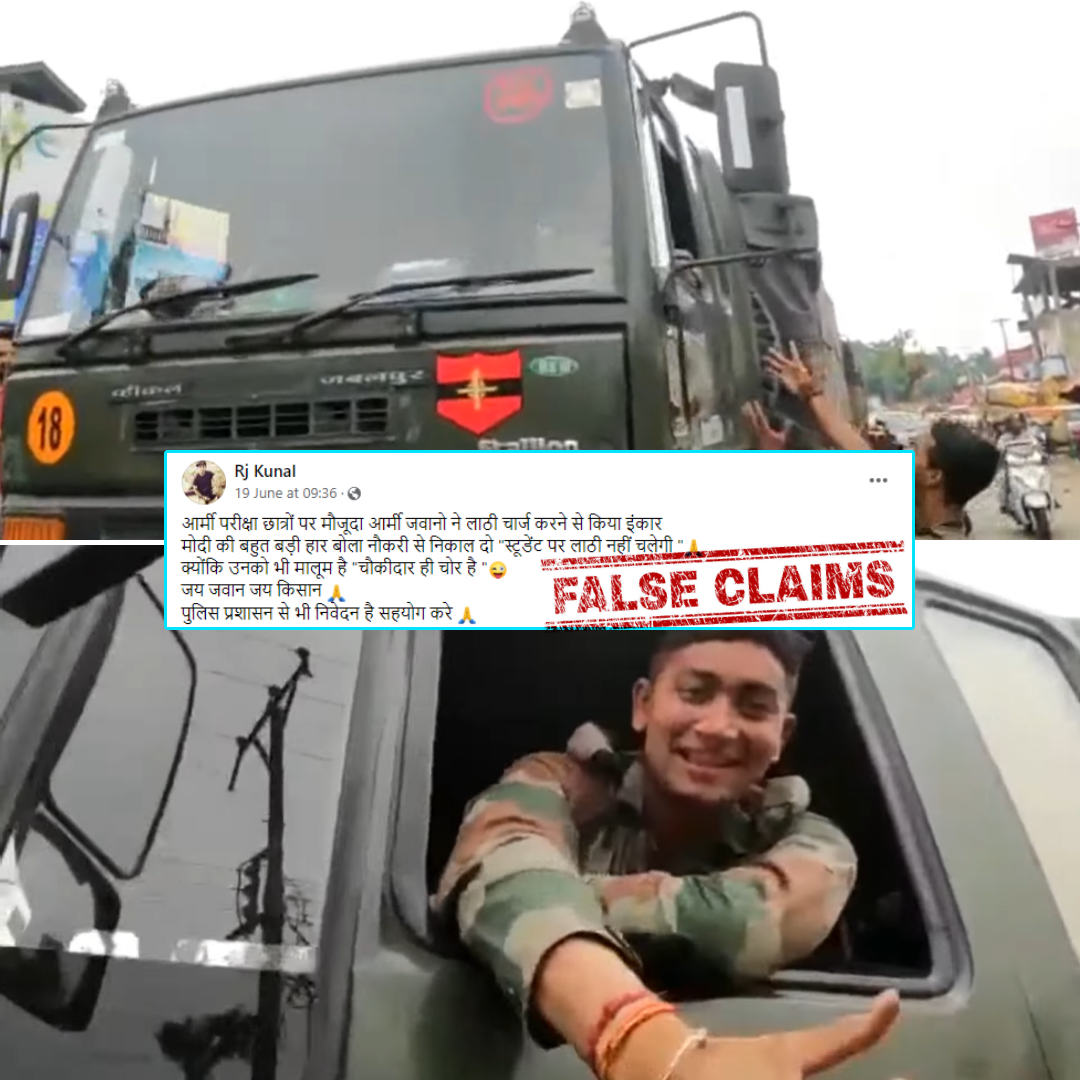 A Facebook user wrote, "Indian Army's five trucks of jawans refused to use lathis even if they're fired from their jobs. We request the Police to follow this too." The Logical Indian fact check team verified the viral claim.

A claim about army jawans refusing to lathi-charge the Agnipath scheme protestors has gone viral on social media. This comes amid the violent protests against the Agnipath scheme, where police had to resort to using lathis (sticks) to control the crowds.

A video showing soldiers in army trucks and being greeted by a crowd of people is being shared with claims that the jawans refused to use lathis on the protesters, even though their jobs on the line, and the police should also show support to the protesters, just like the jawans.

[English Translation: Indian Army's five trucks of jawans refused to use lathis even if they're fired from their jobs. We request the Police to follow this too. He, who has himself felt it, will get what it feels like. There are many people who are privileged in the country.]

[English Translation: Existing army jawans refused to lathi charge on army aspirants. Big defeat for Modi. Officers said, you can fire us from the job but we will not use the stick on the student" Because they also know that the watchman is the thief. Jai jawan jai kisan Police administration is also requested to cooperate.]

It is being widely shared on Facebook with a similar claim. Click here, here and here to view.

The Logical Indian fact check team verified the viral claim and found it to be false. The army has not deployed in any part of the country to control the Agnipath scheme protestors till now.

During the initial investigation, we extracted different keyframes from the viral footage and conducted a reverse image search. It led us to the original video uploaded on a YouTube channel in which the extended version of the viral video can be seen. The title of the video reads in English, "Seeing the army vehicles coming, the boys salute them. The soldiers also stopped the truck and shook hands." In the original video, it can be seen that some youths stopping army convoy on the road, greeting soldiers and raising pro-army slogans. Some soldiers can be seen shaking hands with them.

The same video was also shared by a YouTube channel named Defence Zone. It is to be noted that nowhere in the video any conflicting situation arises that could prompt actions like lathi-charge.

We also looked for media reports but could not find any credible media report which mentioned any sort of clashes between the army soldiers and the aspirants. The army has not yet been deployed to stop the protests. Till now only the policemen are working to stop the demonstrations of Agneepath scheme.

Also Read: Was Nupur Sharma Arrested As This Viral Video Shows? No, Viral Video Is From Rajasthan's Farmer's Protest