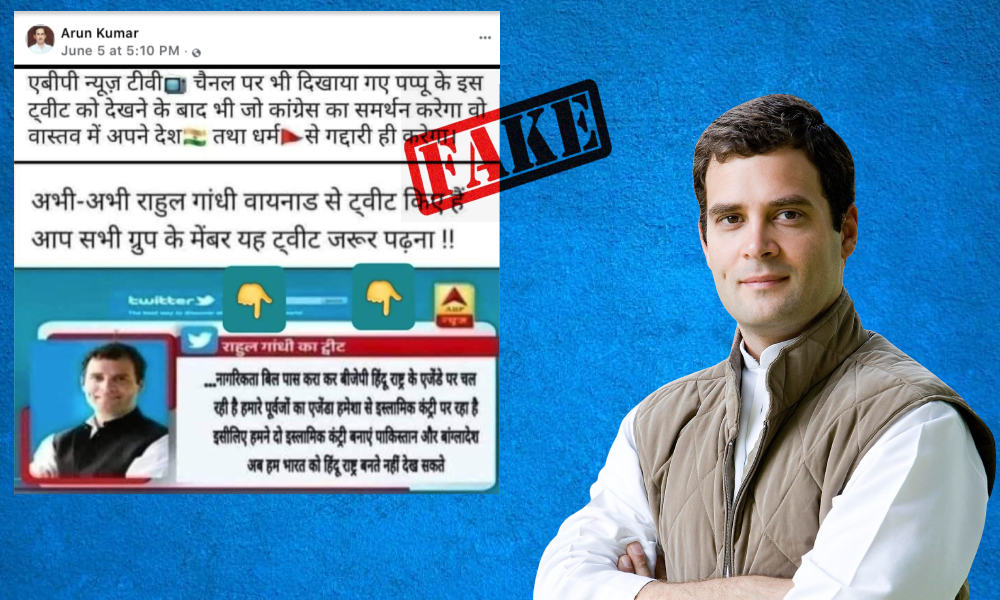 A post is viral on social media in which people are claiming that Congress leader Rahul Gandhi tweeted saying his ancestors' agenda has been an Islamic country. The Logical Indian Fact Check team find the viral claim false.

A screenshot of a purported news bulletin of ABP News is going viral on social media. It is being shared that Congress MP and former Congress President Rahul Gandhi has tweeted that the Bharatiya Janata Party (BJP) is working towards making the country a 'Hindu Rashtra' by passing the Citizenship Amendment Bill (CAB), and our ancestors' agenda was always an 'Islamic country'. This image is viral for over a year and keeps resurfacing.

Rahul Gandhi tweeted that he is against India becoming a 'Hindu nation' and wanted India to be an islamic country and that the same tweet was aired on news channel ABP News.

To know the truth of this viral tweet, we did a search on the YouTube channel of ABP News Hindi using the keyword 'Rahul Gandhi tweet'. We did not find any video on the tweet that is viral. However, we found a news bulletin uploaded on 10th December 2019 on ABP News Hindi related to anti-CAA.

Also, the alleged screengrab of the ABP news bulletin has many grammatical mistakes apart from no punctuation in the entire text.

On 10 December 2019, the Congress leader tweeted that the CAB was an "attack on the Indian Constitution".

Apart from this, we also got the recent bulletin of ABP News Hindi of July 2. These bulletins were on Rahul Gandhi's tweet. It can be seen that the current format of the bulletin in ABP news is different from the format seen in the viral screenshot.

It is clear that the screenshot of the bulletin of ABP News Hindi was tampered with and shared. Also, it is being falsely claimed that Rahul Gandhi has tweeted saying that his ancestors wanted India to be an Islamic country. Hence, the viral claim is false.