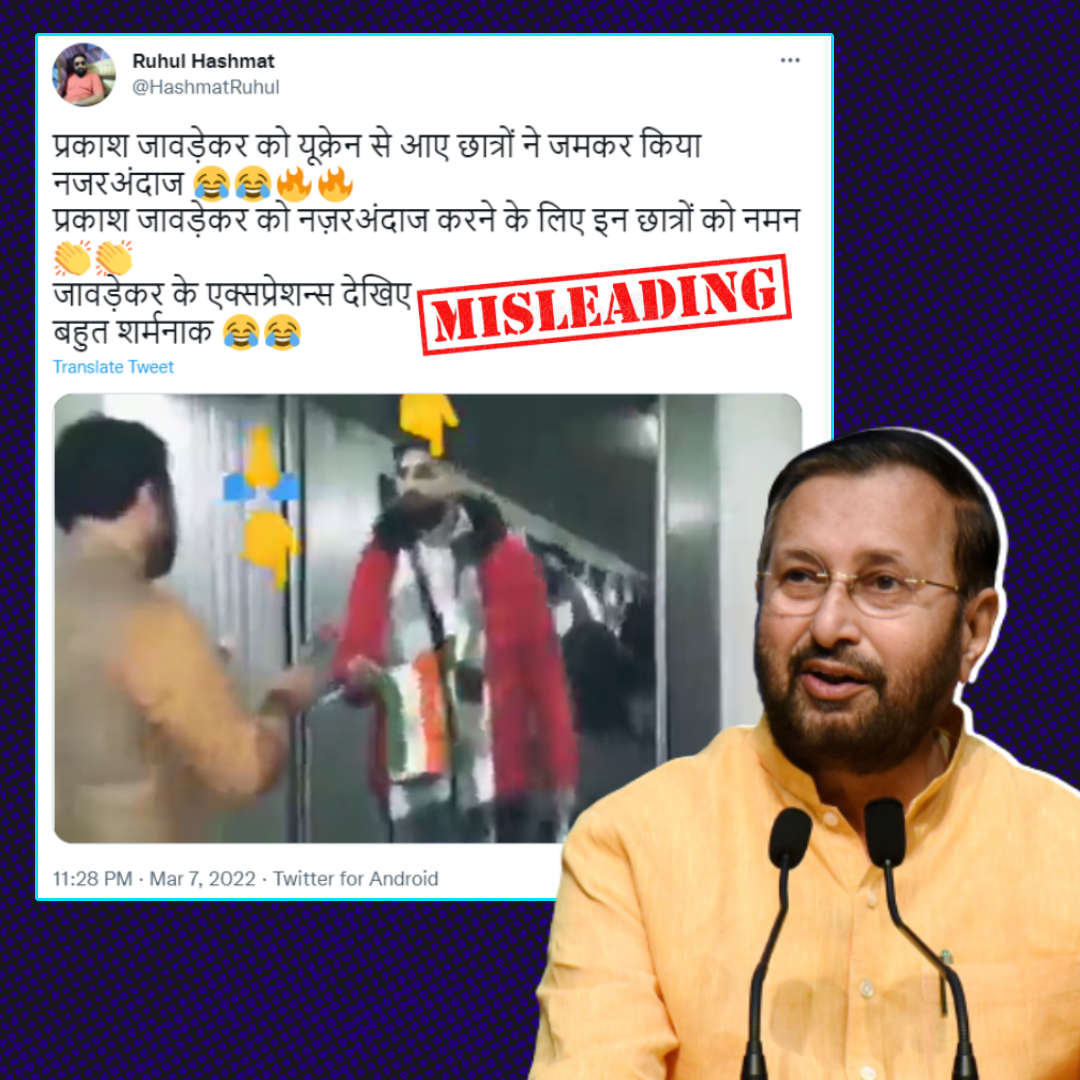 A video of a politician being ignored as he offered roses to Ukraine returned students at an airport is viral claiming that he is Prakash Javadekar. The Logical Indian team verifies the video and the claim.

Amidst the Ukraine-Russia war, Operation Ganga was started by the Indian government to bring people trapped in Ukraine. Under this, more than 15,900 Indians have been brought back so far. Meanwhile, a video in the name of a BJP leader is being shared on social media. In the viral video, a man is seen giving flowers to the students, but the students go ahead without taking flowers. The person's face is not visible due to poor video quality. While sharing this video, social media users claim that the viral video is of Prakash Javadekar, who was at the Delhi airport to welcome the students returning from Ukraine, but the students ignored him.

[English Translation: Children coming back from Ukraine gave the vision of development to Prakash Javadekar.] Viral video shows former IB Minister Prakash Javadekar being ignored by students coming from Ukraine when he welcomed them at Delhi airport.

The Logical Indian fact check team verified the claim and found it to be false. The man in the viral video is Union Minister Kishan Reddy.

During the initial investigation, we did an open keyword search and found the still of the viral video in a report of NorthEast News dated 07 March 2022. The report's title reads, "Ukraine-returned Indian students ignore union minister G Kishan Reddy, deny to accept roses". According to the report, the man in the viral video is Union Minister of Tourism G. Kishan Reddy. Taking a hint from it, we did a keyword search and found a report of Jansatta dated 08 March. According to it, Union Minister G. Kishan Reddy had arrived at the New Delhi airport to welcome the students returning to India from Ukraine but was ignored by some students there. A few students took flowers from the Union Minister while some refused, and some of them did not even look at the Union Minister. A student also asked him whether he is on behalf of the Government of India? On hearing yes in response, the young man said that then we do not want this (flower) from you. We also found a video report of TV9 Telugu in which a clearer version of the video can be seen. The title of the video reads, "Union Minister Kishan Reddy's welcome for Indians evacuated from Ukraine - TV9".

In further investigation, we also found that Union Minister G Kishan Reddy shared some images of that day on his official Twitter handle as well. In this image, G Kishan Reddy can be seen wearing the same dress as seen in the viral video. While sharing the photos, he wrote, "Welcome Back to Motherland! Welcome Home! Received our students who have been safely evacuated from #Ukraine, under@opganga, on behalf of our people, PM Shri @narendramodi Ji & Government of India, today in New Delhi. #OperationGanga".

Welcome Back to Motherland!

Received our students who have been safely evacuated from #Ukraine, under @opganga, on behalf of our people, PM Shri @narendramodi ji & Government of India, today in New Delhi.#OperationGanga pic.twitter.com/TY08HJHp2Y

Our investigation shows that the man in the viral image is Union Minister G. Kishan Reddy and not Prakash Javadekar. However, some of the students ignored the minister while he was greeting the students coming back from Ukraine. Hence, the viral claim is misleading.