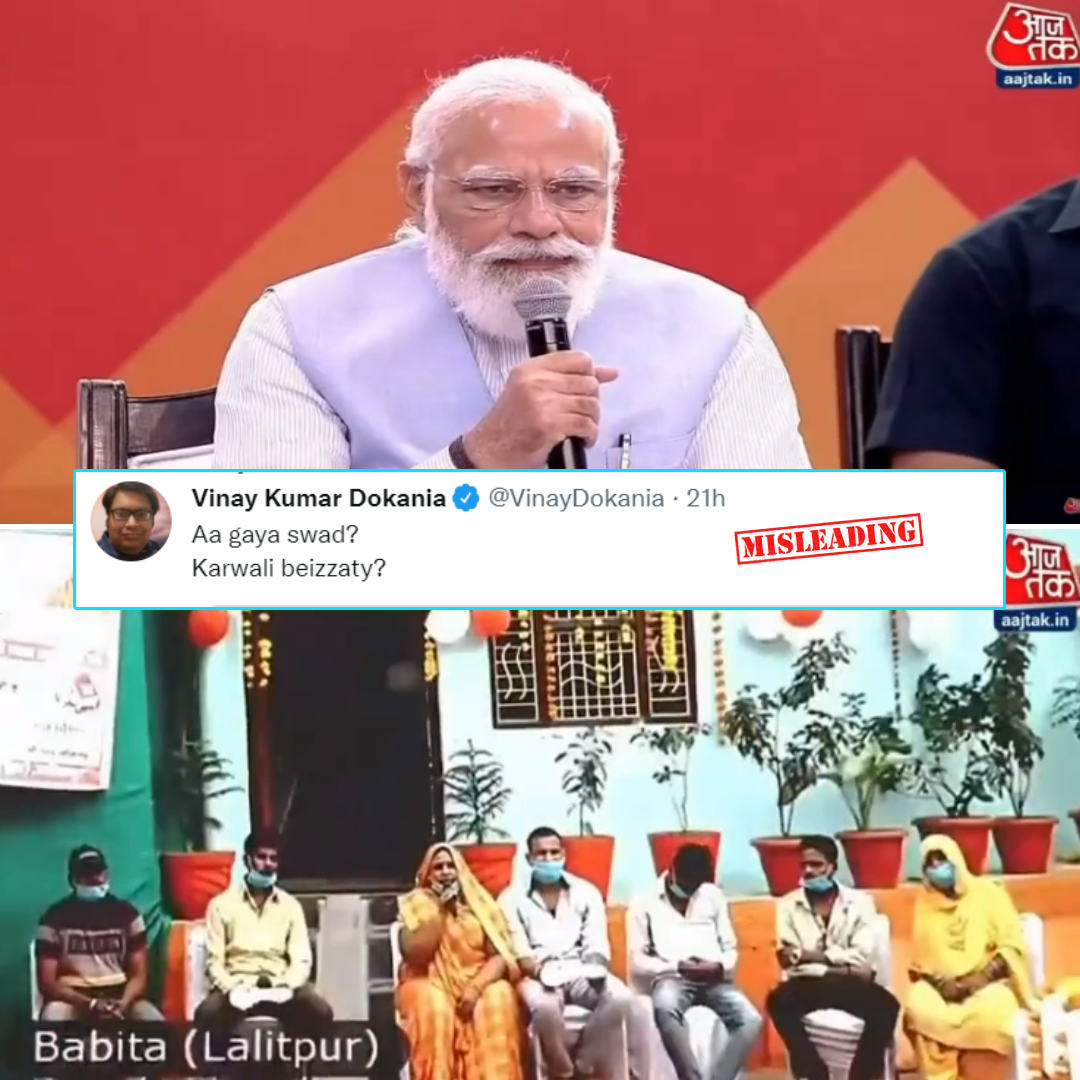 A clip of virtual interaction from an event, 'Azadi@75 – New Urban India: Transforming Urban Landscape', is being shared on social media to take a dig at the Prime Minister.

A short clip of virtual interaction between Prime Minister Narendra Modi and a woman is being shared on social media. In the clip, the PM asks, "So have you got any benefit of this Pradhan Mantri Svanidhi Yojana?" to which the woman replies, "No sir, I didn't get anything, sir."

Alka Lamba, a politician associated with Indian National Congress (INC), shared the clip on Twitter. She captioned it with a pun, "बस चेहरा देखिए".

Hasiba Amin, the National Convenor of INC, shared the clip via Twitter. She captioned it, "So this happened while PM was interacting with people from UP. Try to script and control narrative all you want, the truth does eventually come out."

So this happened while PM was interacting with people from UP. Try to script and control narrative all you want, the truth does eventually come out. pic.twitter.com/XIVpIvrYEc

Netizens shared the clip on social media with a similar narrative.

The video shows a beneficiary saying that she hasn't received any benefit from the PM SVANidhi scheme.

The Logical Indian Fact Check team verified the claim and found it to be misleading. The shared clip is cropped from a virtual interaction between Prime Minister Narendra Modi and a woman beneficiary of one of the government schemes from Lalitpur, Uttar Pradesh. She got benefitted from other programs but not from the PM SVANidhi scheme.

We watched the shared clip multiple times and observed a few things. We noticed the logo of Aaj Tak in the top right corner. We also noticed that the woman was identified as Babita (Lalitpur) during the interaction in the bottom left corner.

We searched the video on the YouTube channel of Aaj Tak using specific keywords. It led us to a more extended version of the virtual interaction, uploaded on 5 October. A part of this video from 2:18 to 2:25 time frame is cropped and shared on social media.

The more extended version of the clip shows that the PM interacts with Babita on several government schemes and encourages her to benefit from them all. He explains to her about PM SVANidhi Yojana and how she can benefit from it. PM Street Vendor's AtmaNirbhar Nidhi (PM SVANidhi) scheme intends to facilitate collateral-free working capital loans of up to INR 10,000/- of one-year tenure to approximately 50 lakh street vendors help resume their businesses in the urban areas, including surrounding peri-urban/rural areas.

During the interaction, the PM asks several questions from Babita about herself, her family and other schemes that she has benefitted from. She replies that now, she has a pakka house through PM Awas Yojana, she has been credited with Rs 2.5 lakh through PM Jan Dhan Yojana, and she has a gas connection through PM Ujjawala Yojana but says that she didn't get benefited from PM SVANidhi Yojana.

To sum up, a clip from an event held at Indira Gandhi Pratishthan, Lucknow, Uttar Pradesh, on 5 October is shared with a misleading claim. The event was an inauguration of 'Azadi@75 – New Urban India: Transforming Urban Landscape' under which the PM handed over keys of Pradhan Mantri Awas Yojana - Urban (PMAY-U) houses to 75,000 beneficiaries in 75 districts of UP and also virtually interacted with beneficiaries of the scheme in the state.

Also Read: No, This Viral Image Is Not Of Yogi Adityanath's Elder Brother