The viral image is from Bihar's Vaishali district and the image was taken in 2015. It has nothing to with the Gujarat education system as Delhi CM Arvind Kejriwal claimed.

After winning the Punjab elections, the Aam Aadmi Party is now preparing for the Gujarat Assembly elections which is going to be held later this year. Aam Aadmi Party chief Arvind Kejriwal and Punjab Chief Minister Bhagwant Mann started their election campaign in Gujarat through a roadshow in Ahmedabad. Meanwhile, a picture of people scaling the walls of an examination centre is going viral on social media. In the viral image, a four-storeyed building on which people clinging to each storey's windows can be seen. People while sharing this image claimed that the viral image is from Gujarat and mocked at the condition of Gujarat's education system.

A Twitter user Dr. Bharat Kanabar who claimed to be a political analyst and followed by Prime Minister Modi shared this image and wrote a caption in Gujarati which reads in English, " The "K" of the Kamal is absolutely there, but no one taught the "Sh" of the "Siksha" (education). Education has become a commodity in this country of 200 universities and 40,000 colleges whose buyers and sellers are shameless. The education system is plagued by viruses like paper leaks, exam theft, fake degree certificates. He later deleted the tweet. You can see the screenshot of his tweet below. 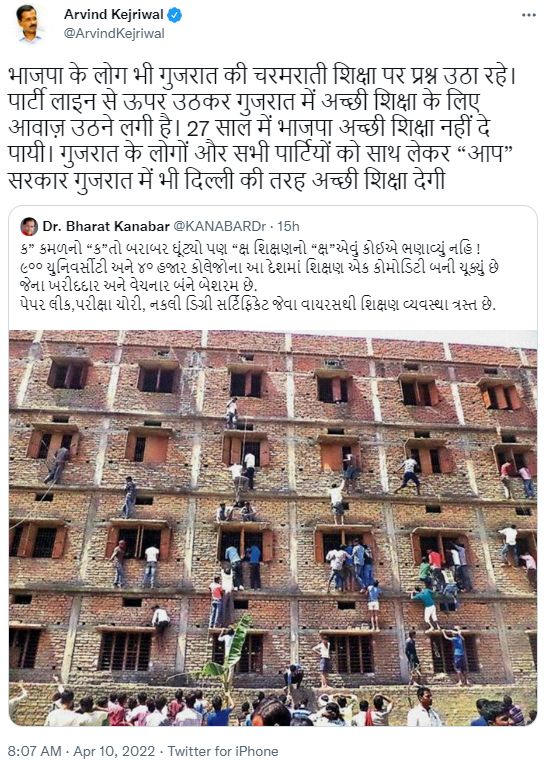 Later this image was widely shared on Facebook and Twitter by the supporters of the AAP party.

The Logical Indian Fact Check team verified the viral claim and found it to be false. The viral image is from Bihar.

To know the truth of the viral image, we did an open google reverse image search which led us to several reports dated back to March 2015 in which similar image can be seen. According to the report of The Indian Express dated 25 March 2015, the viral image is from Vaishali, Bihar. This photograph was taken during an examination held in Vidya Niketan School located in Mahanar of Vaishali district. It had brought a lot of disrepute to the state in the country. 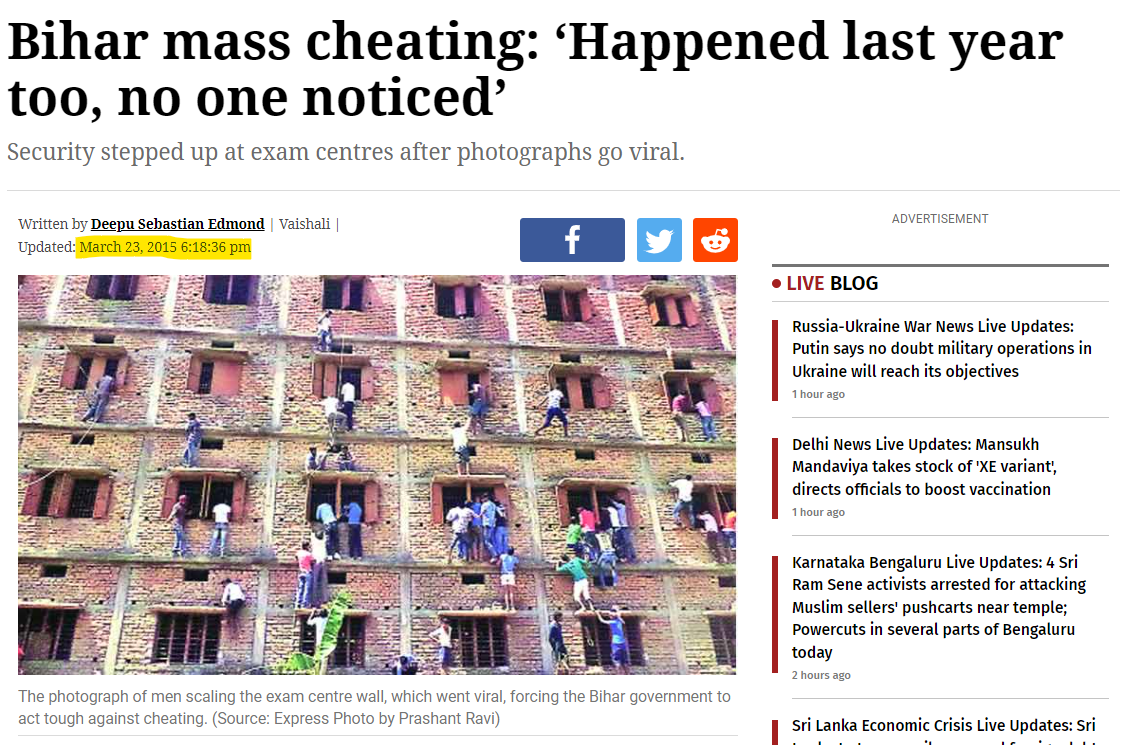 On searching more, we also found a video report of ETV Bharat Bihar in which similar footage can be seen. According to the report, after the picture surfaced, 700 examinees were expelled from that center and eight police personnel were also suspended.

It is worth noticing that nowhere Dr. Bharat Kanabar, whose tweet was quoted by Arvind Kejriwal, mentioned in his tweet that the viral image was from Gujarat. Later Dr. Kanabar made another tweet issuing a clarification about the viral image. He wrote a caption in Gujarat which reads in English, "The photograph in my tweet is from Bihar. The main issue is about the baddies entering the education sector. There is nothing like Harkhawa with Congress or AAP. I have been an active activist of BJP for 3 years and the ideology of nationalism is in my veins, so even if you ask me when I wake up, only "K" of the Kamal can be said.

Our investigation shows that the viral image is from Bihar's Vaishali district and the image was taken in 2015. It has nothing to with the Gujarat education system as Delhi CM Arvind Kejriwal claims. Hence, the viral claim is false.

Also Read: No, This Video Of Muslim Children Being Trained To Use Guns Is Not From Indian Madrasas