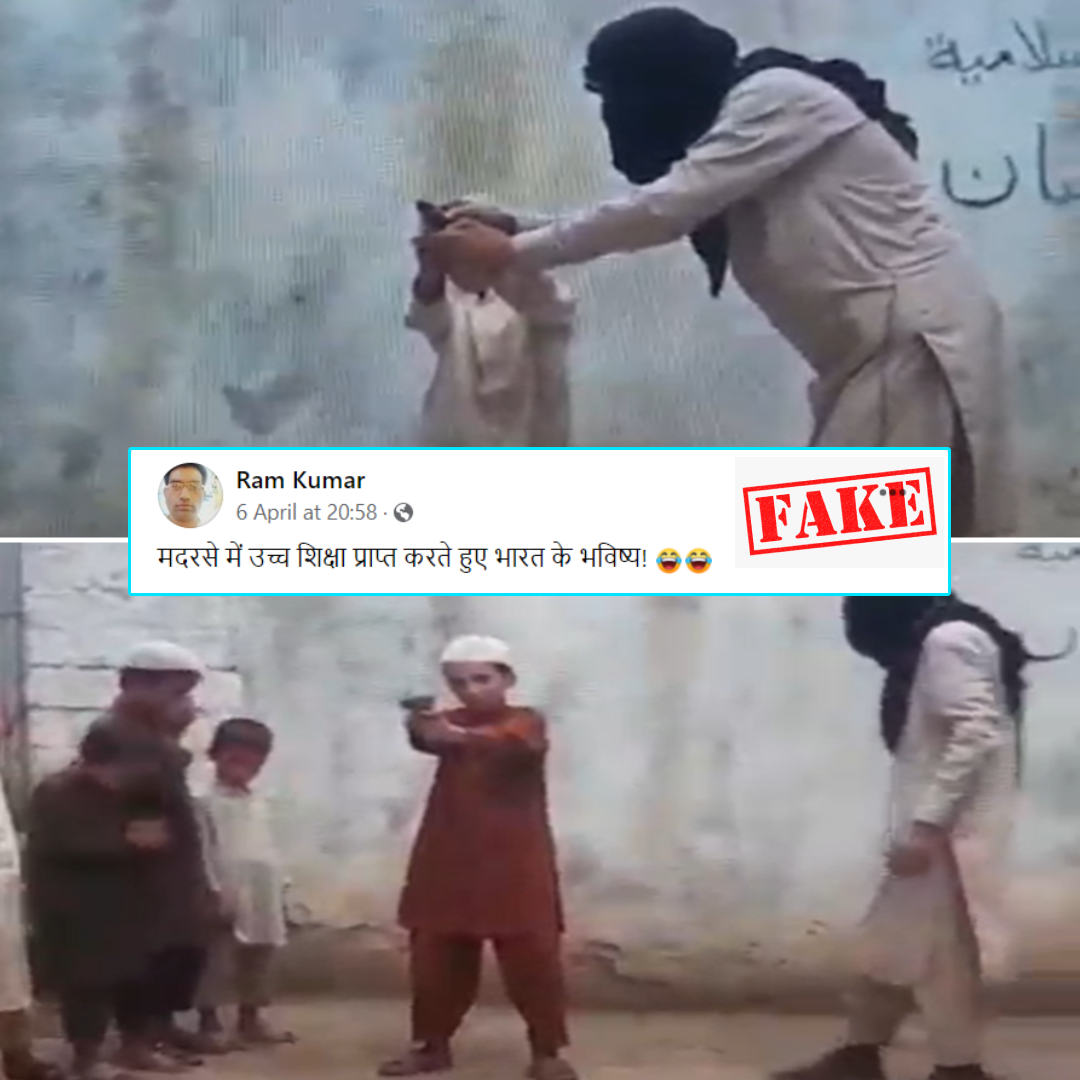 No, This Video Of Muslim Children Being Trained To Use Guns Is Not From Indian Madrasas

A social media users shared the video with the caption, "For "Ghazwa-e-Hind", Muslim children are being prepared in the madrasa. If madrasas are not closed, then India will soon become Pakistan".

A video of children being instructed in operating pistols and rifles has gone viral across social media. The video is being circulated with the claim that it shows the reality of teachings in madrasas.

In the past, there has been a deluge of misinformation circulating on social media regarding madrasas. The viral posts often claim that children in madrasas are taught extremist teachings and that madrasas do not follow laws regarding hoisting the national flag. Claims such as these have been debunked many times by The Logical Indian article.

The viral video depicts a man with his face covered with a head wrapping instructing children how to hold pistols and rifles. The 1.42 minutes video shows children firing these arms.

In most instances, the viral posts claim that these children are receiving extremist training in madrasas. While the location of the video isn't specified, some social media users allege that the footage is from a madrasa in India.

[English Translation: For "Ghazwa-e-Hind", Muslim children are being prepared in the madrasa. If madrasas are not closed, then India will soon become Pakistan]

[English Translation: Honorable Chief Minister Shri@himantabiswa. @CMOfficeAssam, you have done an excellent job by closing the madrasa. Otherwise, such training is given to the students in the madrasa while pursuing higher education @HMOIndia."

The Logical Indian Fact Check team verified the viral claim and found it to be false. The viral video is from Afghanistan.

We noticed that the viral video is a recording of a YouTube video from AlJazeera's channel, as indicated by the logo in the corner. The image led to a report by the Russian media outlet, RT. The information contained the snapshot from the video and gave more context to the situation depicted. The information, published on 10 March 2016, talks about children appearing in propaganda videos of the Islamic State.

This led us to conduct a keyword search based on this information. We came across a The Guardian article that details the 'Children of Islamic State' report, which stated that children had been increasingly used in Islamic State propaganda during 2015 and 2016.

The report also carried the following photo, which matched the snapshot in the viral video.

We also found the still of the viral video in a report of Frontline dated 17 November 2015. The article's title reads, "Why Afghanistan's Children Are Used as Spies and Suicide Bombers." According to the report, the viral video is from Afghanistan, where Islamic State fighters were training young children to use weapons for the purpose of 'Jihad'. We conducted a keyword search based on this article which led us to this documentary by Al Jazeera. This documentary talks in part about the children that the Islamic State of Iraq and the Levant (ISIL) use as tools for propaganda and war.

The documentary features children as young as 5-year-old from the Kunar province of Afghanistan who were trained to fight for the ISIL. The documentary details how the children were brainwashed by the organisation.

The AlJazeera video shows the scenes from the viral video from the 45:47 mark.

To conclude, the viral posts made the claim that madrasas, likely those in India, were providing extremist training to children. In actuality, the viral video is a snippet of a documentary by Al Jazeera about how children were brainwashed to become soldiers for the ISIL. Reports from The Guardian also talk about this situation in detail.

Also Read: Women Of Hindu Family Were Attacked With Rod By Muslims In Mirzapur? No, Video Viral With False Communal Claim