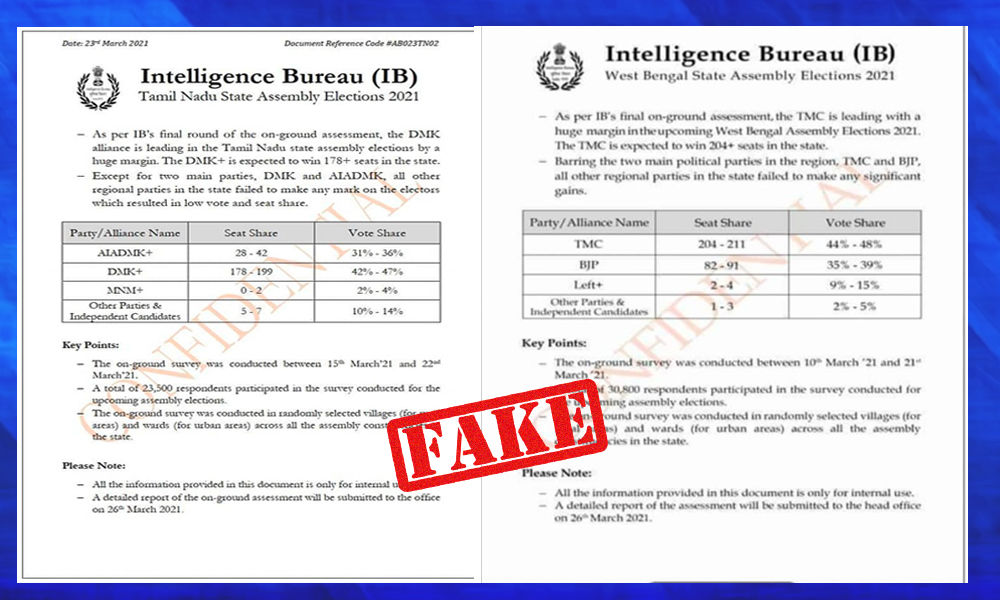 Social media users are sharing two reports claiming to be the on-ground assessment done by Intelligence Bureau about West Bengal and Tamil Nadu Assembly Elections. The Logical Indian Fact-Check team found the reports to be fake.

Social media users are sharing purported 'on-ground assessment' of the West Bengal and Tamil Nadu's Assembly Elections done by the Intelligence Bureau (IB). The one which shows IB's assessment of Tamil Nadu's elections says that Dravida Munnetra Kazhagam (DMK) will win more than 178 seats. At the same time, the assessment for the West Bengal election says that Trinamool Congress (TMC) is expected to win over 204 seats.

The West Bengal elections are being conducted in 8 phases between March 27 to April 29, 2021, while assembly election in Tamil Nadu is to be held on April 6.

According to AllGov.com, The Intelligence Bureau (IB) is considered the oldest surviving intelligence organization in the world. IB technically falls under the authority of the Ministry of Home Affairs and serves as India's internal security agency responsible for mitigating domestic threats. However, the IB director is part of the Strategic Policy Group and the Joint Intelligence Committee (JIC) of the National Security Council, and can report directly to the Prime Minister. Although the exact functions of the agency remain unidentified, it is known that the agency is responsible for counterterrorism, counterintelligence, intelligence collection in border areas, infrastructure protection, and anti-secession activities. IB works with other Indian intelligence and law enforcement organizations, particularly RAW (Research and Analysis Wing, India's external intelligence agency) and the newly created Defense Intelligence Agency, along with other foreign agencies.

However, the Intelligence Bureau's role does not comprise conducting surveys or on-ground assessments to predict election outcomes.

The fact-check department of the Press Information Bureau (PIB) tweeted to deny any such reports by Intelligence Bureau. They tweeted, "#Fake reports circulating in the name of Intelligence Bureau (IB) are claiming that an electoral assessment pertaining to the ongoing assembly elections in West Bengal and Tamil Nadu has been conducted by IB. #PIBFactCheck No such on-ground assessment was carried out by IB."