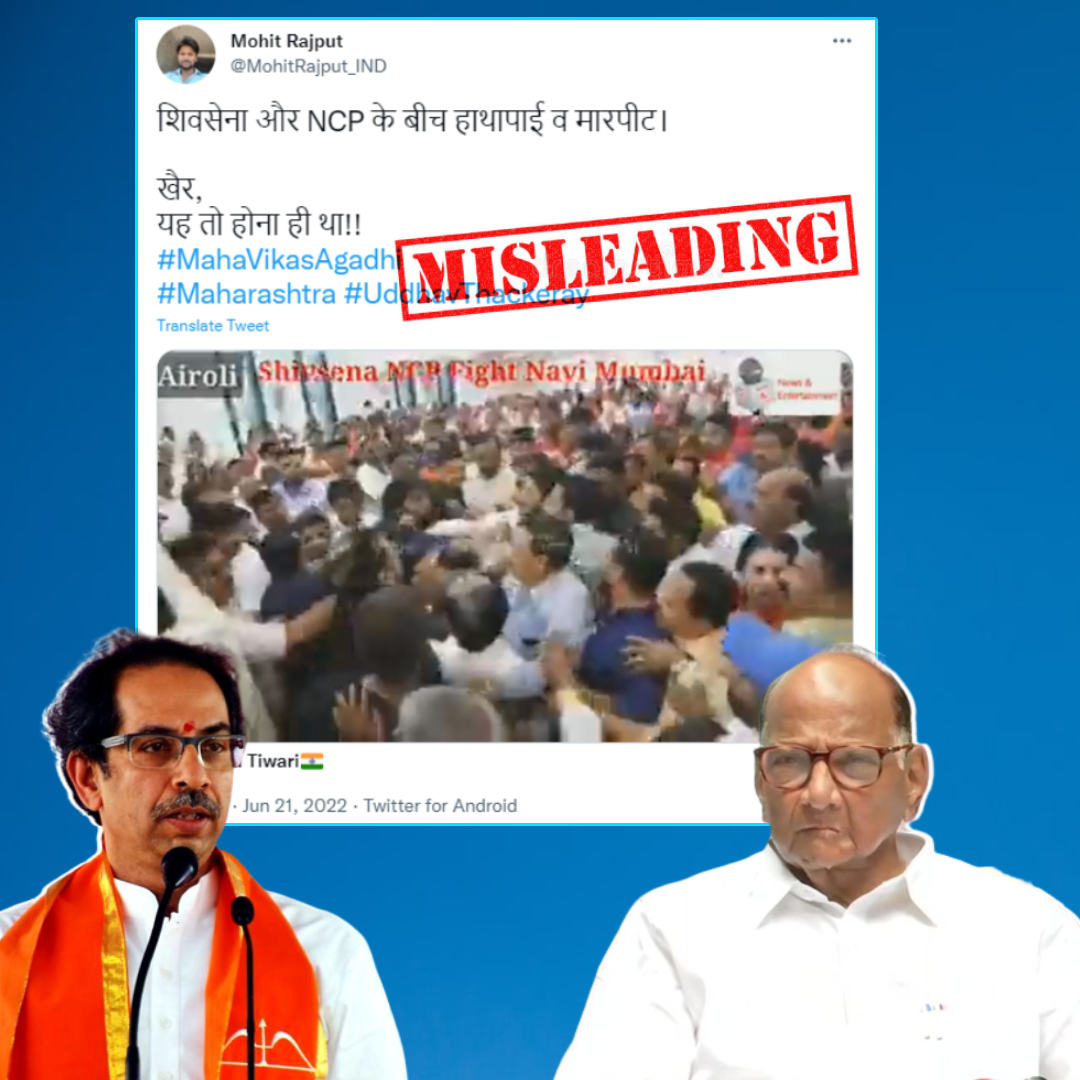 The viral video of clash between NCP and Shiv Sena workers is not recent but from March 2019. The fight took place in Airoli, Maharashtra during an inauguration ceremony.

Amidst the ongoing rebel crisis in the Maha Vikas Aghadi (MVA) government, a video of fight between two political groups is doing rounds on social media. In the viral video, people can be seen arguing amongst themselves leading to fight. While sharing this video, people on social media claimed that there has been a fight between the workers of Shiv Sena and its ally NCP. This comes after political crisis going on in the Maharastra. Shiv Sena leader Sanjay Raut also hinted at the dissolution of the Maharashtra State Assembly with a tweet posted on the morning of June 22, 2022.

[English Translation: Scuffle and fight between Shiv Sena and NCP. So, it had to happen!! #MahaVikasAgadhi #Maharashtra #UddhavThackeray]

It is viral on Facebook with a similar claim.

Viral video is of a recent clash between NCP and Shiv Sena workers amid Maharashtra political crisis.

The Logical Indian fact check team verified the viral claim and found it to be false. The viral video is from 2019.

During the initial investigation, we did a keyword search which led us to a YouTube video dated 1st March 2019 in which same footage can be seen. The title of the video reads, "Shiv Sena and NCP Fight at Airoli Navi Mumbai." According to the video, the incident took place in Airoli, Navi Mumbai during an inauguration ceremony.

On searching more, we also found the same video from a different angle in a video report of TV9 Bharatvarsh dated 2 March 2019. According to the report, a marriage hall was built by the Navi Mumbai Municipal Corporation (NMMC) in Airoli, during the inauguration of which there was an uproar between the people of NCP and Shiv Sena. A Shiv Sena corporator alleged that the NCP mayor did not wait for Shiv Sena MP Rajan Vichare to light the lamp. Due to this, there was a fierce clash between the two groups.

It is evident from our investigation that the viral video of clash between NCP and Shiv Sena workers is not from recent but from March 2019. The cash took place in Airoli, Maharashtra, during a inauguration ceremony. It has nothing to do with the ongoing Maharastra political crisis. Hence, the viral claim is misleading.

Also Read: Was Nupur Sharma Arrested As This Viral Video Shows? No, Viral Video Is From Rajasthan's Farmer's Protest