Fact Check: Is The First Daughter Of China Singing In This Viral Video?

A YouTube video of music performance by a woman is being circulated on social media with the claim that she is the daughter of Chinese President Xi Jinping. It is also being claimed that performance was a part of her graduation ceremony.

The title of the video claims that she graduated from Harvard University with a different name.

The Youtube video which is being circulated was actually uploaded on February 23, 2019. A Youtube user pointed out that the singer in the video was of Japanese origin and that her name is 'Hiraku Nishida'.

To confirm this, the viral video was broken into individual frames and a Google Reverse Image search was done using InVid. This led to a similar video which was uploaded on 'The News Talkers' website. The video was posted by a user 'lamlamchem' on YouTube in 2008. The title read 'where the boys are – 西田ひかる'.

'西田ひかる', when translated to English reads 'Hiraku Nishida'. A keyword search based on this indicated that the singer in the viral video is indeed the popular Japanese pop singer and actress Hiraku Nishida. 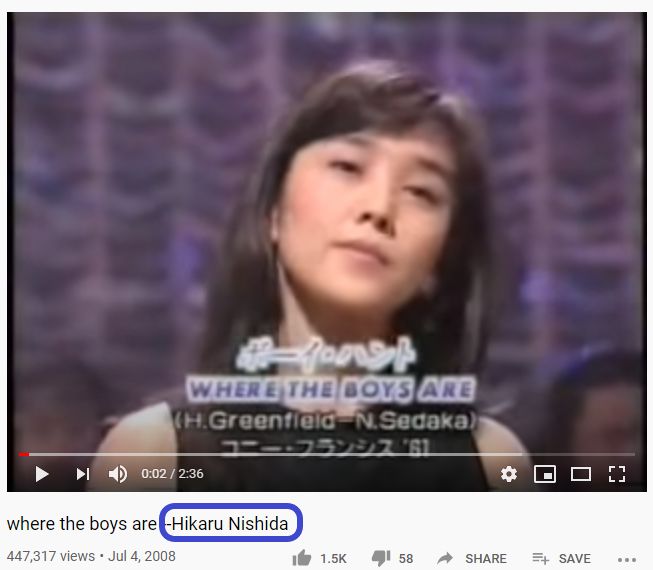 Some of her other performances can be seen here and here.

Below is a comparison of the singer's photo (right) taken from her profile which was found on the website of Manase Productions and a scene from the viral video (left): According to a report by First Post which was published on February 14, 2015, Chinese President Xi Jinping's daughter Xi Mingze was first seen in public when her father had first assumed power back in 2013, during a visit to a remote village in China. The article also mentioned that she is a Harvard University graduate.

Below is a comparison of her photograph from the article (left) With the photograph of Hiraku Nishida (right) and a scene from the viral video (centre):

Further, 'The New Yorker' reported that Xi Mingze had graduated from Harvard University in 2014 where she had enrolled with a different name. However, the video from the 2014 Harvard University Commencement Ceremony does not show any live singing performance.

Therefore, Japanese pop singer Hiraku Nishida's performance is being circulated with the false claim that she is Xi Jinping's daughter.