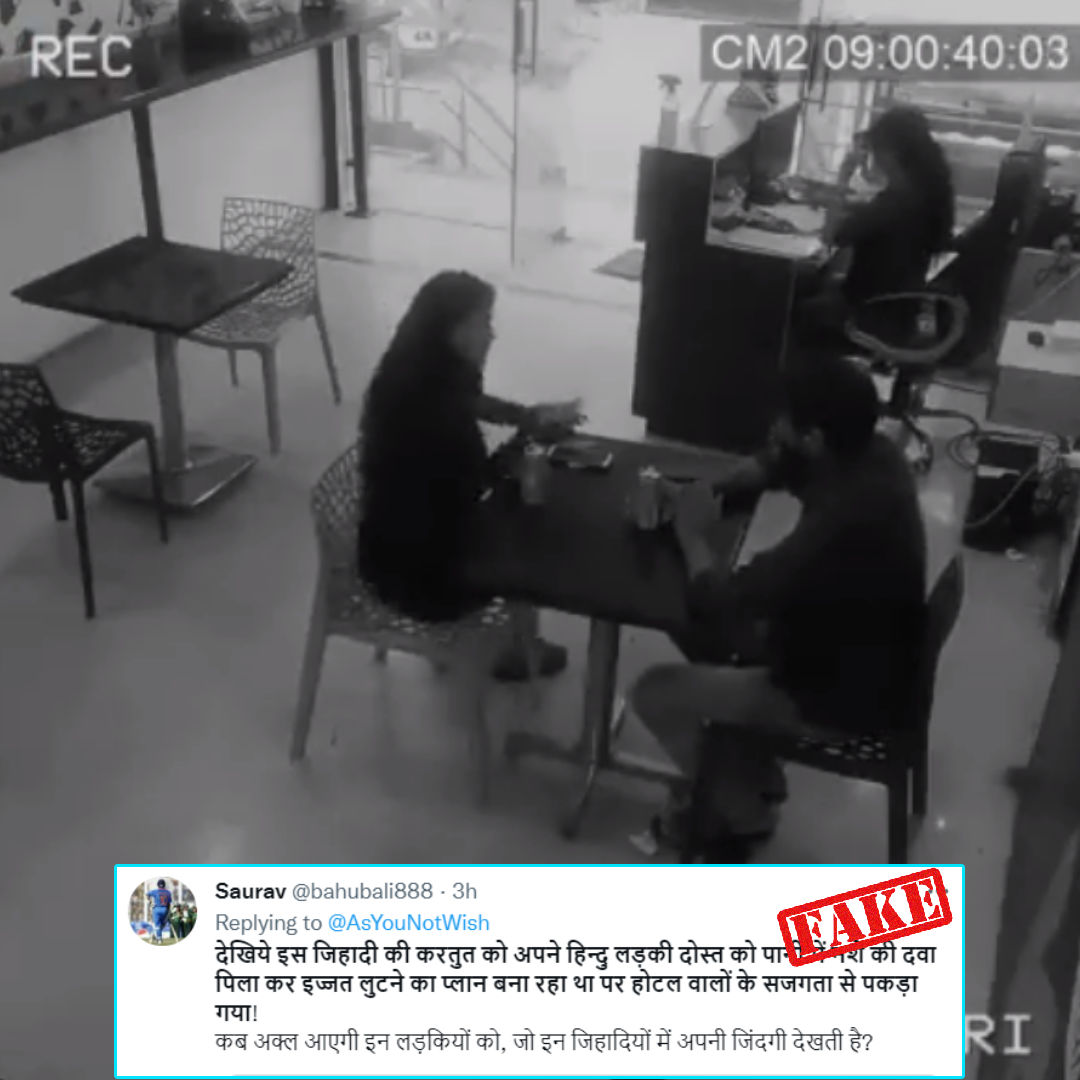 There is a sudden rise in old videos and images being circulated with false communal claims. A video is currently viral with a caption, "Look at the act of this jihadi, he was planning to rape his Hindu female friend by adding intoxicants in water, but was caught by the alertness of the hoteliers!".

A CCTV footage is viral on social media with a communal claim. In the viral video, a boy and a girl can be sitting at a restaurant. After a few seconds, the girl gets up and goes somewhere. Meanwhile, the man can be seen adding sedatives to the girl's drink. However, he failed as the restaurant manager saw him adding drugs to the drink and informed the police. It is being claimed that the man in the viral video is a Muslim who tried to sedate the Hindu girl so that he can take advantage of that girl. But due to the alertness of the restaurant staff, the Muslim boy was caught.

[English Translation: Look at the act of this jihadi, he was planning to rape his Hindu female friend by adding intoxicants in water, but was caught by the alertness of the hoteliers! When will the wisdom come to these girls, who see their lives in these jihadis.]

The man in the viral video is a Muslim who tried to sedate a Hindu girl so that he can take advantage of her.

The Logical Indian Fact Check team verified the claim and found it to be false. The viral video is fictitious.

We extracted different keyframes from the viral video using the InVid tool and ran a Google reverse image search. We found this video on the verified Facebook page of an actress and model named Hamsa Nandini. It was uploaded on her Facebook page on 18 October 2020.

The caption of the video reads in English, "YOU COULD BE THE NEXT....Thank you for watching! Please be aware that this page features scripted dramas and parodies as well. These short films are for educational purposes only."

It is clear from the description that the viral video is fictional in nature. Also, the last part of the video, where it was mentioned Scripted dramas and parodies', was intentionally removed from the viral video so that people do not know the truth and communal angle can be given.

Apart from this video, there is more such imaginary CCTV footage on her page. Most of them were based on social issues.

Our investigation shows that the viral video is a fictional drama, and there is no communal angle involved in it. Hence, the viral claim is false.