A photo of the new Australian Prime Minister Anthony Albanese is going viral on social media. He has sworn in as the country's 31st Prime Minister on May 23, 2022.

[English Translation: The new Prime Minister of Australia, Anthony Albeneze, taking the oath. Om Namah Shivay. Seeing their dress, the secularists in India must have been smitten.]

The Logical Indian fact check team verified the viral claim and found it to be misleading. The viral picture is being shared with false context.

During the initial investigation, we did a google keyword search and found the viral image in a report of ABC news, an Australian media organization dated 19 May 2022. The title of the report reads, "Scott Morrison and Anthony Albanese pictured wearing scarves bearing symbol used by Hindu ultra-nationalist group VHP India." According to the report, the viral picture was taken during a function organized by Hindu Council of Australia in Parramatta area of ​​Australia. In the other images, the then Prime Minister Scott Morrison and his wife Jenny can also be seen wearing similar saffron scarves. In the report, it was mentioned that this event took place days before the results of the Australian elections were declared. It is to be noted that PM Anthony Albanese became the 31st Prime Minister of Australia on 23 May 2022. 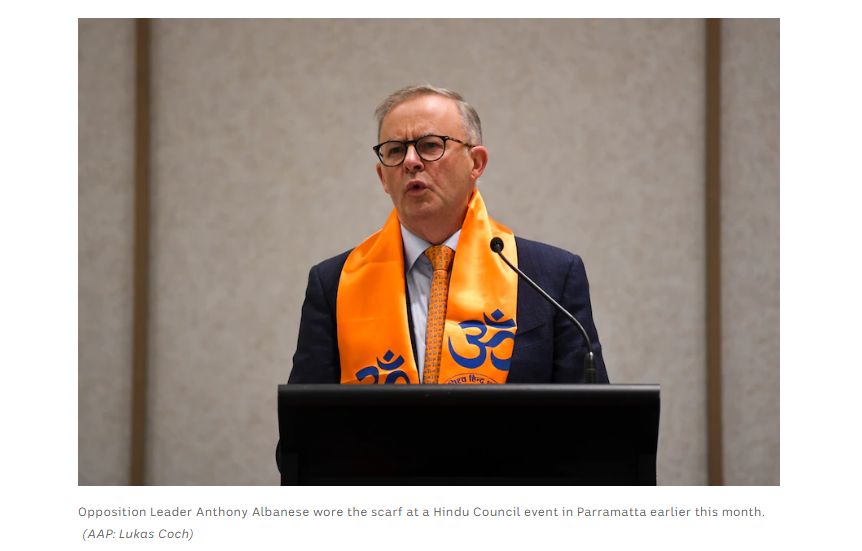 On searching more, we also found few more images of the same event shared by the official twitter handle of Anthony Albanese. The caption of the tweet reads, "A warm reception in Parramatta tonight with leaders from the Hindu faith and subcontinental communities."

A warm reception in Parramatta tonight with leaders from the Hindu faith and subcontinental communities. pic.twitter.com/6m79gzXhDz

Hindu Council of Australia also shared some images of the same event in which Prime Minister Anthony Albanese can be seen wearing saffron scaves."

We looked for the footage of Anthony Albanese's swearing-in ceremony. We found the video of the oath ceremony uploaded on YouTube channel of Guardian Australia dated 23 May 2022. However, it can be clearly seen in the video that he is not wearing a saffron scarf.

He also tweeted image of his swearing-in ceremony. No where he was wearing the saffron scarves.

I am deeply honoured to serve as Australia's Prime Minister.

As Prime Minister, I want to bring people together and lead a government that is as courageous, hard-working and caring as the Australian people.

It is evident from our investigation that the viral image of Australian Prime Minister Anthony Albanese wearing saffron scarves is not from his swearing-in ceremony but from a function organized by the Hindu Council of Australia. Hence, the viral claim is false.