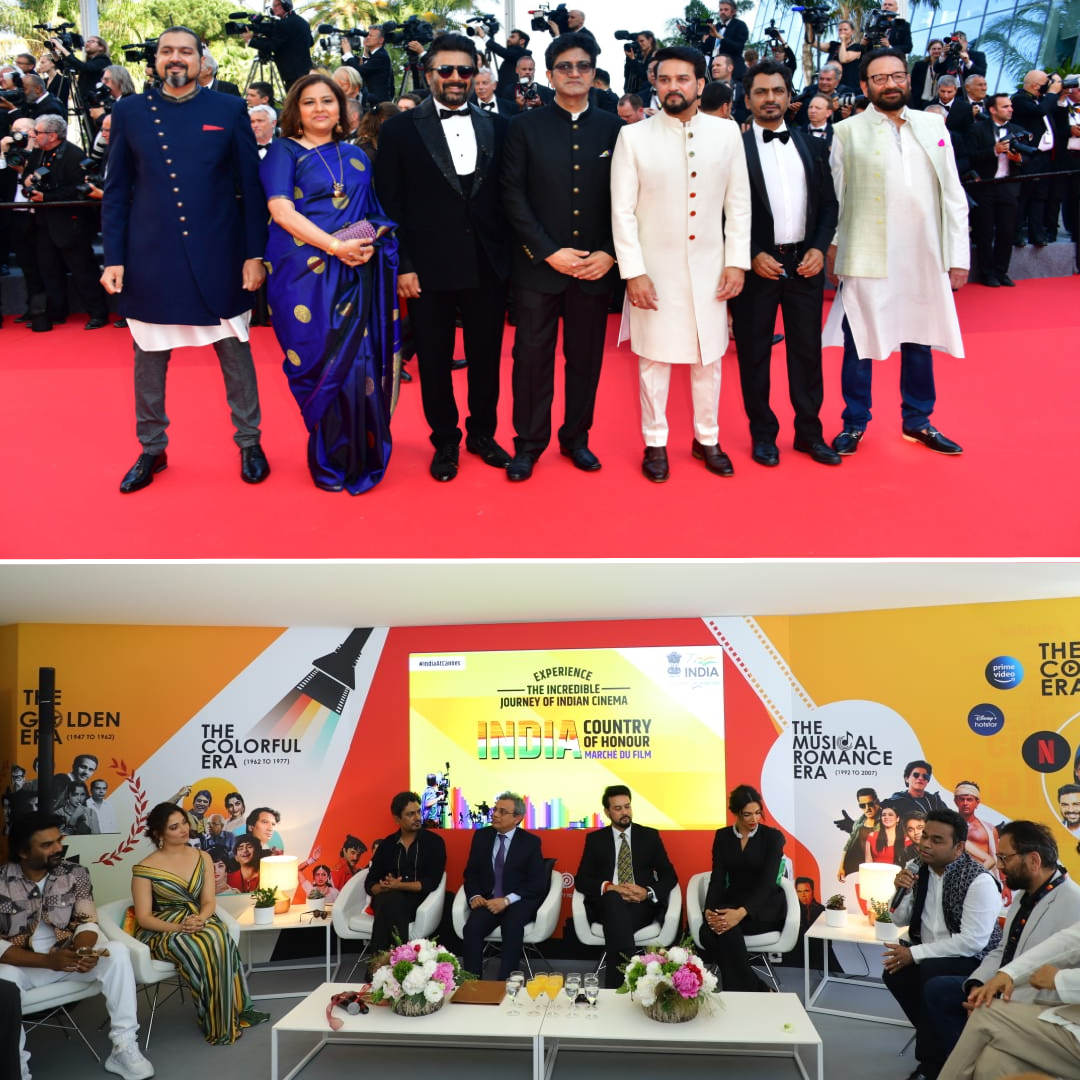 Cannes Film Festival And Cannes Film Market Are Not The Same! Media Misreports

The hype that social media creates is unlike any other, and the same can be said about the coverage around the ongoing Cannes Film Festival 2022. There is a sharp increase in discourse around the Festival, as compared to previous years.

Anurag Thakur, the Minister of Information and Broadcasting, announced earlier this May that India was going to be the first to be deemed the 'Country of Honour' at the Cannes Film Market, the business event of the Festival, and this honour would be given to different nations in the subsequent editions. Thakur, along with a few other government officials, has accompanied stars and celebrities to the Festival, that commenced on May 17 this year. Bollywood actress Deepika Padukone was chosen to be an official member of the jury to judge this year's Palme D'or, or Grand Prize, that is given to best film at the Festival. The Indian Government had also planned to give a boost to audio-visual startups at the event, giving them global exposure.

This has prompted additional conversation about India at Cannes, and has put the focus on the films that are going to be screened there, more than usual. Social media has been abuzz with news regarding the several films that will be screened at the Cannes Festival, and how much it means for young filmmakers back home. The excitement around films at the different events during the festival has only been growing, and people are missing out on the difference between the actual Cannes Film Festival and its economic counterpart, the Cannes Film Market.

For example, many believed that 'Rocketry - The Nambi Effect', directed by R Madhavan, was part of the official selection, and that it had its world premiere at one of the theatres at the Festival. Technically, it was screened at the Cannes Film Market. An explainer was reported by The Indian Express, here.

A twitter user, for another example, shared this article by IndoreeTalk, which references a misleading article by Dainik Bhaskar. The article contains a video which makes the claim of the screenings happening at Cannes Film Festival under the official selection, and does not mention the Cannes Film Market at any point. The video states that India is the Country of Honour at the Cannes Film Festival, and again, does not mention the Cannes Film Market. The video also references that films and documentaries are carefully selected globally for the competition, and it goes on to say that six Indian films will be screened this year at the Festival.

Another example of wrongly reported events is the article by the New Indian, which allegedly changed the headline when called out for being wrong.

The Executive editor of the New Indian tweeted out the article with this headline: "India @ Cannes: Will An Indian Movie Bag Prestigious Palme d'Or?"

For the unversed, India has been chosen as first official 'Country of Honour' ever at Marche' Du Film', alongside Cannes, coinciding with 75th I-Day year, writes ⁦@navneet_mundhra⁩. https://t.co/RxpSa9rtTY

The Festival de Cannes, or the Cannes Film Festival, is an invitation-only film festival held annually at the Palais des Festivals et des Congres. With previews of new films, ranging from different genres and languages, there is an official selection for the Palme D'or, or the Grand Prix. Over the years, it has become more than just about the films, owing to the red carpet fashion with designers putting their best into the stars' looks.

The Marche du Film, or the Cannes Film Market, is the 'business' or economic counterpart of the main Festival. Holding its position as one of the largest film markets in the world, it is, as the official website states, 'THE rendez-vous' for the global film industry professionals, which include producers, distributors, programmers, buyers, and more. This is the first year that the event has announced a 'Country of Honour', and it will continue with different nations as the focus in subsequent editions.

These are two separate events, with screenings happening in both places, for different awards and acclaim. Here's where the social media hype begins to overlap the two. This was the reason there were so many Indians at the screening of Rocketry in a video that was posted to show the 10-minute standing ovation that the film received.

Screenings at the official selection of the Cannes Film Festival are of films and documentaries that have been nominated under the different categories of 'In Competition', 'Un Certain Regard', and 'Out of Competition'. Other categories in the official selection include 'Special Screenings', 'Cinéfondation', 'Short Films', 'Cannes Classics', and 'Cinéma de la Plage'. These films are specifically selected from thousands of entries by the official Selection Committee.

On the other hand, screenings at the Marche du Film happen in a different way. A filmmaker only needs to pay a fee to get their film premiered at one of the theatres at Marche du Film. It works for both parties as the people behind the Festival get the money, and the filmmakers get bragging rights of having their film 'screened at Cannes' during the film's marketing. People often miss out on the Marche du Film aspect of the screening, when they talk about how these films are going to be screened at the Cannes Film Festival.

One of the Twitter users also brought it to light. He stated, "Learnt recently that you can basically rent theatres in Cannes and say your film premiered at Cannes. It is not part of the official Cannes jury selection. Madhavan's Rocketry is one such example."

Learnt recently that you can basically rent theatres in Cannes and say your film premiered at Cannes. It is not part of the official Cannes jury selection. Madhavan's Rocketry is one such example.

Another Twitter user said the screening at Marche du Film 'isn't as revolutionary as most people think it is.'

Which isn't as revolutionary as most people think it is. Its essentially the business expo side of Cannes. Its not unusual to have, say, 800 movies screened at Marche du film. 6 of which happen to be Indian this time. Screened out of competition.

One user also pointed out that, 'the money spent on "indian delegation" who give excellent interviews on how Modi's rule is great and "Indian Pavilion" at the Cannes Market "Marche du film" is totally funded by Indian Tax Payers Money. "Bollywood Stars" walk the red carpet to sell perfumes/ cosmetics.'

And the money spent on "indian delegation" who give excellent interviews on how Modi's rule is great and "Indian Pavilion" at the Cannes Market "Marche du film" is totally funded by Indian Tax Payers Money. "Bollywood Stars" walk the red carpet to sell perfumes/ cosmetics.

The misleading article was also called out by one of the same Twitter users.

You'd expect a "cinema aficionado" to know better&a news outlet to hv better research skills.Only those movies win Palme d'Or which are in competition and no Indian movie this year is in competition for either Palme d'Or or Un Certain Regard @TheNewIndian_in @navneet_mundhra https://t.co/SzK7jkyKXh

India has been given the chance to pitch five selected Indian films in the 'Goes to Cannes' category in the Film Market. And six films have also been chosen to be screened at the Film Market due to their diversity and range. However, no Indian film is part of the official selection 'In Competition' for the Palme D'or, or under the 'Un Certain Regard' or 'Out of Competition' category this year.

This is not to discredit any film screened at any other event of the festival. The international recognition and the focus still remains for the film and its maker. The issue only arises when it misleads people into thinking that it is part of the official selection when it's not.

According to the official website of Festival de Cannes, the only Indian films that are a part of the official selection by the Selection Committee at the main Film Festival this year, in other categories, are 'All That Breathes' in the Special Screenings category, 'Nauha' in the La Cinef category, 'Starfruits' in the Cannes la Fabrique Cinema event, and 'Pratiwandi' and 'Thampu' in the Cannes Classics category. However, no Indian film is actually being screened for the Palme D'or, or officially competing in the main event.

In a Facebook post by Bijukumar Damodaran, whose film, 'Saira' was screened under the Tous les Cinema du Monde (Cinema of the World) category in 2007, expressed his thoughts about India not having any film in the official selection, which is 'In Competition' for the Palme D'or since 1994.

Posted by Bijukumar Damodaran on Saturday, 21 May 2022

2022 marks the 75th year of the coveted Festival. With actress Deepika Padukone as part of the jury this year, to judge the awaited Palme D'or, it is no small feat. Having an Indian as part of the panel of judges also represents what Indian cinema is, in its present state. Auteur Mrinal Sen was the first Indian to be a part of the jury in 1982.

India has been named the official 'Country of Honour' at the Marche du Film this year, due to 75 years of diplomatic ties between India and France. Prime Minister Narendra Modi's visit to French President Macron holds even more significance in this context. The Information and Broadcasting Minister of India, Anurag Thakur, who is part of the Indian delegation at Cannes this year, added that this status would ensure India's presence as a country of focus, showing its cinema, culture, and heritage, at the opening night of the Marche du Film, as reported by The Business Line. This has added on to the hype around Cannes this year, as this would promote Indian cinema's audio-visual elements and startups globally.