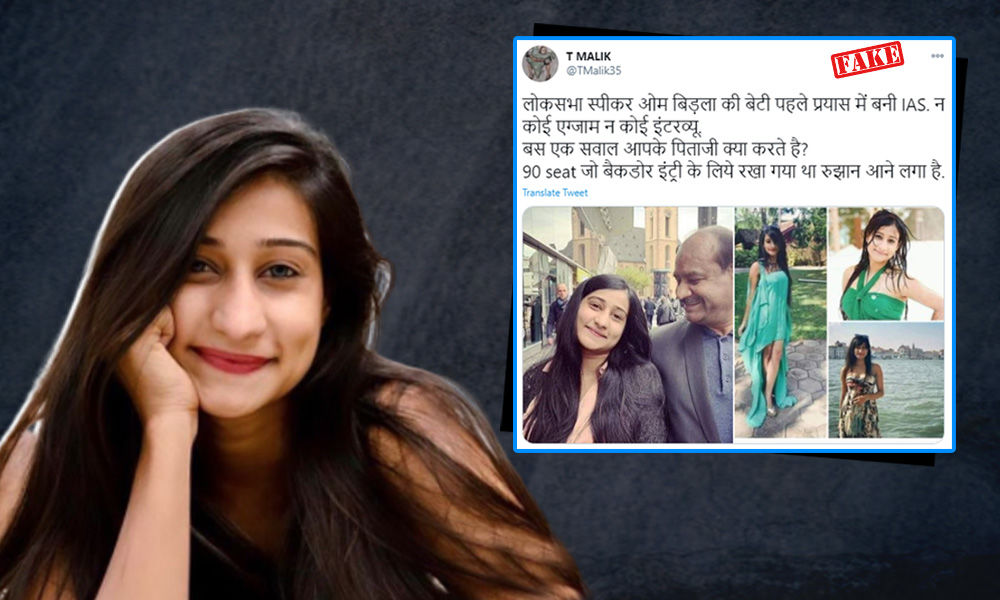 On social media, it is being claimed that Speaker Om Birla's daughter, Anjali Birla got into UPSC without giving any examinations. The Logical Indian Fact Check team debunks the claim.

On social media, it is being claimed that the Lok Sabha speaker Om Birla's daughter Anjali Birla did not give Union Public Service Commission (UPSC) exams but still had her name in the list of selected candidates. The posts hint that Anjali cracked UPSC examinations not due to her talent but due to her privileges for being the daughter of Lok Sabha speaker.

UPSC has released a list of 89 candidates on its reserve list on January 6, 2021. Based on this list, Om Birla's daughter also got selected for civil services.

In context to this, a post went viral on social media with the caption, "How did the daughter of Lok Sabha speaker become an IAS officer without giving any exams? Lok Sabha Speaker Om Birla's daughter became IAS in the first attempt. No exams, No interview just one question, 'What does your father do?' Trends are showing for the 90 seats which were reserved for backdoor entry. This is called a misuse of power.") The daughter of Om Birla qualified UPSC without giving an examination or interview.

A list of reserved candidates was available on the official website of UPSC. On searching, The Logical Indian found Anjali Birla's name on the second page of the list. The list also mentioned her roll number. Her roll number was also present in the list of candidates who qualified Mains examination. The Quint contacted Anjali Birla, who confirmed that she had appeared in all the examinations and had followed all the process. She said, "UPSC had earlier notified that they have 927 vacancies for the 2019 batch. But when the final results came out, they had only filled 829 vacancies. So, in the August 2020 list, my name was not there because I missed the cut off for the General category by 8 marks. Now, in the notification that has been released in January 2021, you can see that UPSC mentions that the Department of Personnel & Training (DoPT) asked for more vacancies to be filled."

We further found out that UPSC released a notification on January 4, 2021, which said that the commission was maintaining a Consolidated Reserve List based on merit. The statement said, "The Commission, in accordance with the Rule 16 (4) & (5) of the Civil Services Examination Rules, was also maintaining a Consolidated Reserve List in order of merit below the last recommended candidate under the respective categories." The statement also said, "As sought by the Department of Personnel & Training, the Commission has now recommended 89 candidates which include 73 General, 14 OBC, 01 EWS and 01 SC, to fill up the remaining posts based on the Civil Services Examination, 2019. Particulars of these candidates are included herewith. The candidates so recommended will be intimated directly by the DOP&T." One more thing to note here is that the result of one candidate is still on hold.

The UPSC stated, "...The Reserve List is not a waiting list. In fact, the Reserve list is necessitated in a multi-service examination to allow candidates of reserved categories to choose a service of higher preference who qualify at or above general qualifying standard without availing any concession/relaxation at any stage of the examination."

The fact check was earlier done by The Quint.