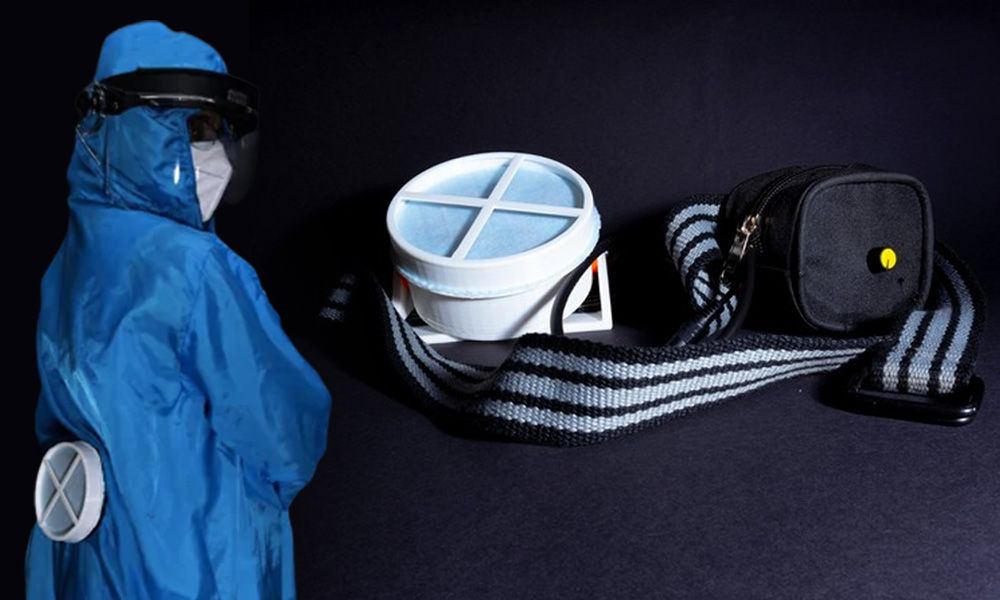 Nihaal Singh Adarsh has developed a belt-like wearable ventilation system for PPE kits. He named it 'Cov-Tech Ventilation System', which comes with a lithium-ion battery. It could last for a period of 6 to 8 hours.

In order to provide some relief to healthcare workers toiling on the frontline, a 19-year-old Mumbai student has developed a compact ventilation system for PPE kits.

Nihaal Singh Adarsh has developed a belt-like wearable ventilation system for PPE kits. He named it 'Cov-Tech Ventilation System', which comes with a lithium-ion battery. It could last for a period of 6 to 8 hours.

"Cov-Tech Ventilation System is like you are sitting under the fan even while you are inside the PPE suit. It takes the surrounding air, filters it and pushes it into the PPE suit. Normally, due to lack of ventilation, it is hot and humid within the PPE suit; our solution offers a way out of this uncomfortable experience by creating a steady airflow inside," Nihaal told NDTV

The design of the ventilation system ensures a complete air seal from the PPE kit. It provides fresh air to the user in a gap of just 100 seconds.

Nihaal admits that the main inspiration behind this invention is his mother, who is a doctor by profession.

His mother, Dr Poonam Kaur Adarsh, has been treating COVID-19 patients at her clinic in Pune. Her mother narrated to him the difficulty faced by doctors and nurses while wearing PPE suits for long hours on a daily basis. This urged Nihaal to think of something innovative that would solve the problems faced by healthcare workers.

He started working on the prototype and developed the first model in 20 days. He also received support from Somaiya Vidyavihar University's RIIDL (Research Innovation Incubation Design Laboratory), which is an initiative of the National Science and Technology Entrepreneurship Development Board (NSTEDB), under the Department of Science and Technology, Government of India.

After six months of continuous work, the initial prototype emerged. Nihaal further gave it to Dr Vinayak Mane of Pune for testing the prototype. However, the prototype was not comfortable for the doctors, and he started working on further designs.

In the process of arriving at the final product, he developed around 20 developmental prototypes and 11 ergonomic prototypes till the final product emerged. He received help from Gaurang Shetty, Chief Innovation Catalyst at RIIDL and CEO of Dassault Systems, Pune.

According to the final design, the product can be worn around the waist, just like a belt. It can also be attached to the conventional PPE kits. This design not only keeps the health workers well-ventilated but also prevents bodily discomfort. It also keeps them safe from various fungal infections.

Nihal says that his initial intent behind designing the product did not extend much beyond giving a solution to his mother's pain. The final product that has come is being used in Pune's Sai Sneh hospital and Lotus multi-speciality Hospital.

The product costs ₹ 5,499 per piece, and it is cheaper than the competitive products available in the market. Nihaal's team is further trying to reduce the price of the product.

The first batch of the product is already available in the market. Further, around 30-40 units will be delivered as trial units to doctors and NGOs.