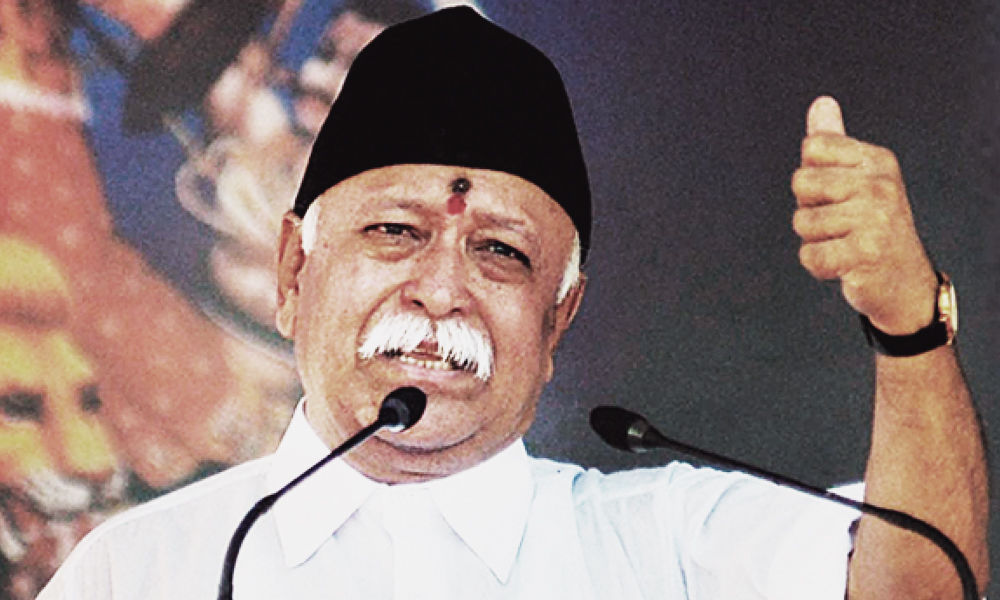 The Rashtriya Swayamsevak Sangh (RSS) chief made the statement in the context of how Mahatma Gandhi found religion as a source of his patriotism.

A Hindu is an 'automatic patriot' and can never be 'anti-national', said Rashtriya Swayamsevak Sangh chief Mohan Bhagwat on Friday during the launch of a book, 'Making of a Hindu Patriot: Background of Gandhiji's Hind Swaraj'.

The Rashtriya Swayamsevak Sangh (RSS) chief made the statement in how Mahatma Gandhi found religion as a source of his patriotism.

"All Indians worship motherland. But Gandhiji said my patriotism comes from my religion. So if you are a Hindu, then you will be an automatic patriot. You may be an unconscious Hindu, you may need an awakening, but a Hindu will never be anti-India." he said, reported The Indian Express.

The book, brought out by Centre for Policy Studies and authored by Dr JK Bajaj and MD Srinivas, revolves around Gandhiji's journey from Porbandar to England and South Africa and back to India.

Bhagwat refers to the book as an authentic research document on Gandhiji. He said that Gandhiji suggested that his dharma and patriotism were not different as love for his motherland originated from his spirituality.

Explaining how Indian culture and Hindu religion-inspired Gandhi, Bhagwat said, "Gandhiji said my religion is the religion of all religions. Gandhiji wanted to say 'Dharm', but there is no parallel to it in English."

Bhagwat also added Gandhi's understanding of religion was of tolerance. "Unity in diversity is our sentiment and not just a matter of policy. Gandhiji said I would follow my religion strictly but also respect other religions. This is the fundamental of Indian thought. The difference does not mean separatism," he added.

Talking about Gandhi's concept of 'swaraj', Bhagwat said by 'swaraj' Gandhi meant not only changing rulers or self-governance but also the reconstruction of society based on civilisational values. Meanwhile, in the book, the authors have quoted Gandhi as having written to Leo Tolstoy that, "… my patriotism is patent enough, my love for India is ever-growing, but it is derived from my religion and is therefore in no sense exclusive."

He also emphasised that the RSS is not trying to "appropriate Gandhiji". "The launch of a book dealing with the rising of a Hindu patriot in the context of Gandhi and the presence of RSS chief can mean a lot of things to the people. People will say we are trying to appropriate Gandhiji. No one can appropriate a great personality. The aim of this book is not that. It is a thoroughly researched book on the life of Gandhiji," Bhagwat said.

Meanwhile, it is said in the book that there was a time between 1893-94 when Gandhi was pressured by his Muslim employer and his Christian employees to explore converting to their respective religions, but he refused. By 1905, he became a devout Hindu and also gave lectures on Hinduism, the book says, as reported by Hindustan Times.