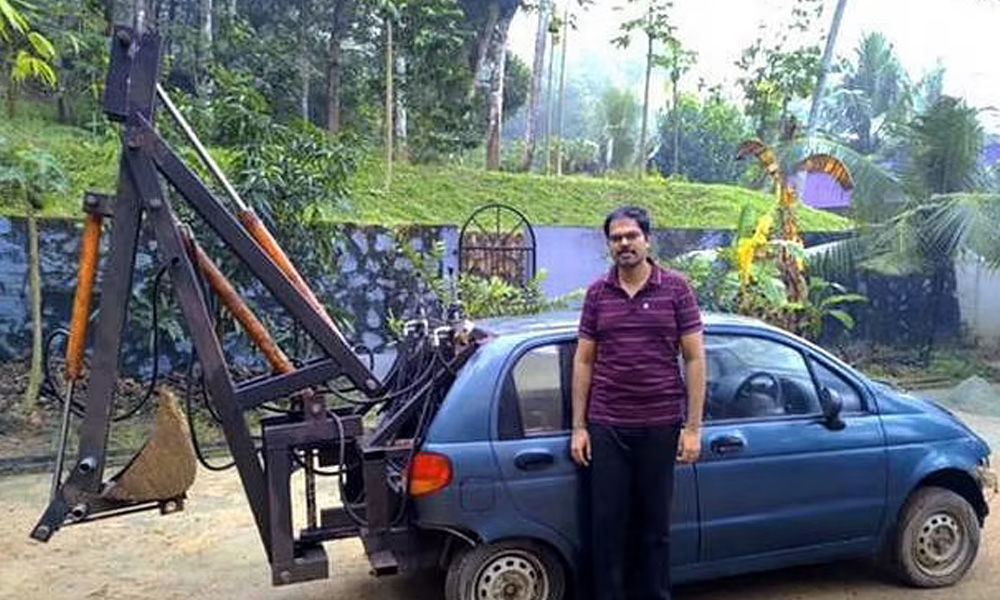 The car-turned-backhoe weighs 1.1 tonnes. It has a vertical and horizontal reach of 14 ft and can exert a digging force of six tonnes. The maximum lifting capacity is 500 kg. This home-made machine needed an amount of ₹70,000 to put it all together.

For most people, an old car means quick disposal and going ahead to purchase the latest model launched in the market. However, Ben Jacob from Thiruvananthapuram doesn't go by this rule.

He considers transforming old vehicles into something useful at a low cost. Instead of disposing of his old hatchback, this young scientist who hails from Choozhattukotta village chose to convert it into a backhoe or excavator.

The 34-year-old scientist who works with the Indian Space Research Organisation's (ISRO) Liquid Propulsion Systems Centre (LPSC) managed to transform the old car all by himself during the lockdown period.

The transformed Daewoo Matiz, with the metal arm along with a digging bucket at the end extending like a small crane, stands in his backyard and is ready for use. The transformation of the car was not an easy task for Ben and he admits that he had to seek the help of a local workshop for punching 44-mm holes for the hinges.

The car-turned-backhoe weighs 1.1 tonnes. The backhoe has a vertical and horizontal reach of 14 ft and can exert a digging force of six tonnes. The maximum lifting capacity is 500 kg.

Ben says that it would fall in the 'mini excavator' category. In the market, commercial excavators could cost as high as ₹20 lakhs. However, his home-made machine needed an amount of ₹70,000 to put it all together. It took two months for Ben to complete the transformation of the car.

Ben had purchased the 1998-made second-hand car for his wife a few years ago. Even though the vehicle was more than two decades old, Ben didn't want to dispose of the car.

"I wanted to convert it into something useful. I checked out several ideas and finally settled on the backhoe," he says as reported by The Hindu.

As Ben had an equipped workshop at home, he started working on the design aspects of the backhoe in May.

Ben had to order many of the components from Gujarat for transforming the car. The parts of the car he ordered were delayed in getting delivered due to the COVID-19 restrictions. But he managed to assemble all the parts and get it ready by July-August last year.

The machine can be used for multiple purposes such as in farms or for digging ponds. Ben has set a perfect example of how an old vehicle could be transformed into something of use at the low cost involved.