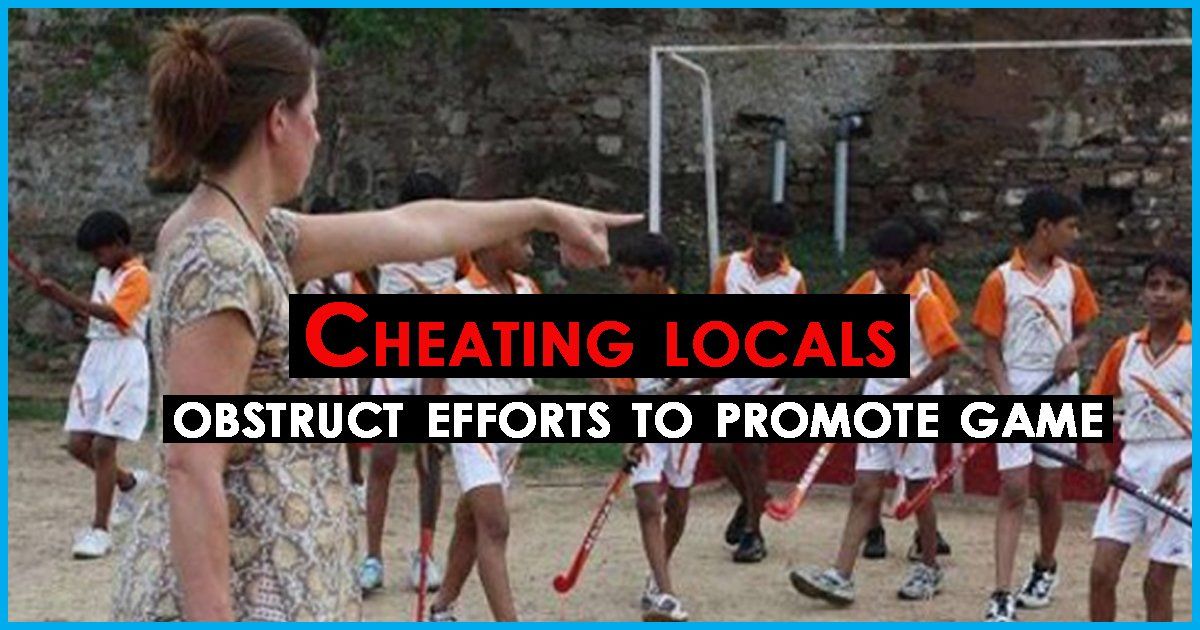 Does India deserve a Hockey revolution?

For the uninitiated and the seasoned Indian hockey fan alike, the name Andrea Thumshirn is not a name you hear too often. More often than not, the average sports fan in India has rued about the cumulatively increasing commercialisation and the consequent mistreatment that athletes often suffer when left at the beck and call of sporting federations. Passive armchair activism aside, there are very few genuine initiatives being taken to rectify all that is wrong with the sporting scenario.

Andrea Thumshirn’s vision to revolutionise Indian Hockey has not been easy. For the past six years, she has set up her base in the state of Rajasthan with a single goal in mind; to work for Rajasthan and hone the young talent there. Needless to say, Rajasthan has an abundance of young children with a particular penchant for sports in general. “The idea came to me very randomly,” says Andrea in an exclusive conversation with Sports Possible. “I just visited Rajasthan during an India trip that was centred around Agra and Delhi.”

“The first thing that struck me was the scarcity of daily needs like water and electricity that these people have to live with every day,” she said. “When I came here, I was struck by these very hardships and I wanted to do something to help,” she added.

Since 2009, Andrea has been running an NGO named Hockey Village India that caters to the wholesome development of nearly 8,200 kids. Originally setting up a base in the village of Garh Himmat, she soon had to move her hockey camp after incidents of money embezzling came to light.

Her experience in Garh Himmat has already left a bad taste in the mouth especially when it comes to dealing with locals. The entire setup of Garh Himmat was run as a partnership between Andrea and a local business partner. After the initial success of her venture saw more and more children from the indigenous households interested in learning the technicalities of the game, Andrea was encouraged to further invest her time and energy into expanding the very ambitious project. Leaving a cosy job in a travel agency was quite easy for her, she says. “It was never about the money,” this added. For the former German Hockey player, this was a vision she followed with a fierce passion.

She went so far as to import a second hand Astro turf from her home country. The natural terrain of Rajasthan makes is anything but conducive to the proper training of Hockey and Andrea realised that. Moreover, if she was to realise her dream of coaching Indian children for international tournaments, an Astro turf was a must. When things were just beginning to fall into place, the entire saga of cheating and unlawful transactions came to light. Her local business partner at Garh Himmat seemed to prioritise personal gains over any fruitful desires to help the children of his state progress through the game of Hockey.

When confronted, the man admitted to wrongdoing but he was not one to gracefully accept his transgressions. Instead, he resorted to spreading rumours about her NGO insinuating that it was a front to secretly convert the children from Hinduism to Christianity. This effectively turned the locals against her to some extent. “I was left without a place to live. I had no choice but to leave.”

“It’s been 3 years since I shifted the whole project,” she says. “I had a woman back in Garh Himmat who helped me out a lot, initially. She was an English teacher in one of the village schools. She was married to the headmaster of that school.”

“It was her husband who asked me to shift my camp to Mandawar. It seemed like a good enough decision at the time as he told me that the children of his school would be eager students of the game.”

3 years down the line and Andrea had a deja vu in Mandawar. Instead of the emotional satisfaction that compelled her to undertake this project in the first place, she is now seriously contemplating staying in Rajasthan altogether. “This time, it was the land. The very people who supported me initially got greedy.” The piece of land to set up her hockey school has been in dispute since the beginning of the year. During its purchase, instead of attributing it to the NGO, the land was instead bought as a part of the school property where she planned to set up her camp.

For Thumshirn, the emotional setback she has suffered in Rajasthan resulting from the thorough non-cooperation of the people in Rajasthan has been a lot more harrowing than any monetary loss. Perhaps this is why she has refrained from taking any legal action against the concerned parties so far. “When I confronted him, there was no attempt to even deny it. For the past month, we have been in the process of talks and have, finally, managed to reach a settlement. We are having to buy back the land now.”

And this is a process that has effectively drained most of the NGO’s money. “Look, if the money mattered to me, I would never have come here. I earn Rs 10,000 a month. But teaching the children means more to me than that and right now I do not even gratification.”

“We finally managed to get the land papers in our name after the talks. But now, we have no place to stay,” she says with a touch of sad finality. “The local people here used to feed the volunteers from Germany who came to help with the coaching. That was a significant addition to their normal livelihood. Now, that is all gone.”

All said and done, Andrea has battled a lot. Whether it was with the Rajasthan Hockey Association, who initially refused to get her NGO affiliated, or with the stubborn conservatism of the locals who presented a stiff resistance to girls being coached in a sport, for now, it looks as though the battle in Rajasthan is lost. But Andrea’s Hockey revolution in India is far from over. “My next venture is to shift my project to Karnataka. Coorg has always produced good sportsmen in this country. I want to see what it has to offer me.”

“Sport is a way of life,” she says in a matter-of fact way. “The main problem I find here is that sport is not considered a good career choice as it is not particularly rewarding financially. Perhaps that is why people are not encouraged to take it up. I cannot change everyone’s mind but the one thing I have learnt is that the upcoming generations are more open to the idea of sports as a lifestyle.”

For a country that considers Hockey its national sport, at least in spirit, it is heart breaking that she had to face this in the course of her journey.