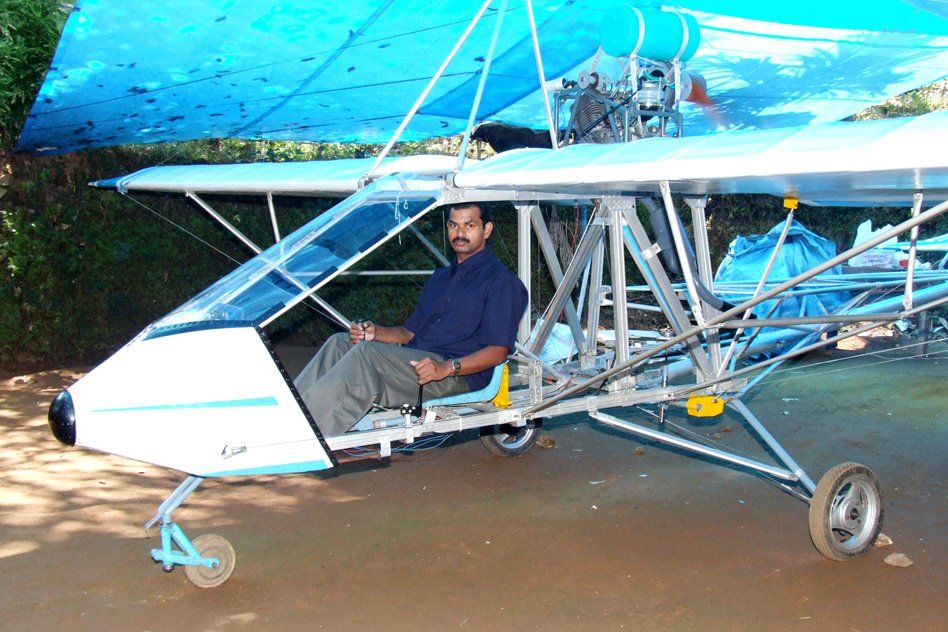 [Watch/Read] Mocked For His Ambition, Deaf And Mute Saji Thomas Built An Aircraft

Helen Keller’s name is still fresh in our minds and here we come across another spectacular personality, Saji Thomas who overcame his disability and build an aircraft all by himself. People in his remote village used to call him an idiot and laughed at his ambition of making an aircraft. Saji is who is hearing impaired is a class 7 dropout and was born into a family who had economic constraint. He was so much inspired by the automobile industry since childhood that even at the age of 5 he used to make small models of cars and aeroplanes with cardboard.

Today his twin seat aircraft Saji X Air-S has accomplished successful flights over the Manimuthar valley in Tamil Nadu. He is now 44 and smiles at those who mocked his desire. The journey was full of difficulties and it took nearly five years to fulfill his dream of constructing an aircraft. He used recycled materials and assembled the aircraft in his backyard at 14 lakh, as against the market price of about 25 lakh.

He carved propellers out of locally-sourced mahogany and gave it layers of polish to give the wooden blades greater speed. He used the shock absorbers of a scooter. During the test flight, the machine flew effectively but stayed below 20 feet as it is yet to obtain a license. The aircraft has 65 HP hirth German engine. The aircraft weighs 256 kg and can fly up to 10,000-13,000 feet. It could be used for sports aviation activities. For an hour’s flight, the plane needs 16 litres of petrol. The cloth that covers the wings of the aircraft are from USA.
As per Reddif, he was disappointed when he could not meet the former President Kalam whom he wanted to show his first aircraft. However, he got a chance to attend a competition through Kalam, where he won the SRISTI Samman.

His first aircraft was bought by the professors of an engineering college for 1,50,000 so that the students would get to know, how an aircraft is built. He gives the credit to his wife, Mariya who he met in Mumbai. He was so passionate to build an aircraft that he sold his land and personal belonging to gather the funds in order to buy equipment s and materials needed to build the same. Today he wants to work in an aeronautical company and build better aircrafts. Hope someone would find some merit in this passionate man who proved his calibre. His source of income came from repairing television sets and his interest in the automobile sector expanded and he was so much into machines that he could easily understand how machines worked and fix the impediment.

His technical understanding grew after working at a local engineering college, assembling and repairing old aircraft used for research. In 2008, he met SKJ NAIR , who assessed his design and arranged his maiden flight at his flying school said that the instrument panel and arrangement of Thomas is superior to Rajahamsa X Air, which inspired Thomas’s flight. His wife, Mariya played a major role in checking the sound of the engine. His son Joshua handles a laptop gifted to him by an Indian American and even helps in research and correspondence. Prior to this research was done through mobile.

Thomas is now looking for a licence and wants to work with an aircraft company to sharpen his skills. Still a pertinent point needs to be raised that the family of Thomas approached the Chief Minister of Kerela, OOMMEN CHANDY for help as the financial condition of the family is precarious and needs aid so that they could educate their son. But the promises have never been fulfilled.
Thomas said that his dream destination is USA as he thinks that people over there are supportive and disabled people are offered better opportunities. The Logical Indian community appreciates the indomitable spirit of Saji Thomas and we hope he finds better opportunities in his mother land and make the country proud as he has continued to do so.