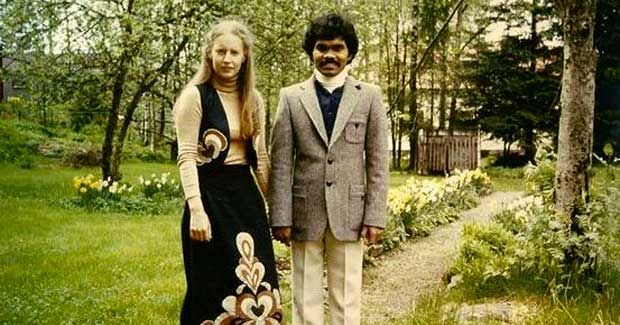 A poor guy meets a rich girl. They fall in love. Girl goes back to her country. Boy promises to make it big and visit her. Time passes but he struggles to make both ends meet. He decides to fulfill his promise – picks up a cycle and sets on a journey across 8 countries to meet the love of his life!

No, this isn’t the story of an upcoming Bollywood movie. Although it pretty much qualifies to be one! This is the story of Dr. Pradyumna Kumar Mahanandia from India and Charlotte Von Schedvin from Sweden and it has all the elements of a Bollywood blockbuster – emotion, drama and lots of love.

An epic saga of romance, PK proves that when love is determined, it pushes all boundaries. Born in 1949 into a poor weaver family of Odisha, Dhenkanal who were considered untouchables, PK was a gifted artist. However, the family didn’t have enough money to finance his education. He would often find himself at the receiving end of insult due to the dreaded caste system. Later In 1971, he joined College of Art in New Delhi and gained popularity for making portraits.

In 1975, 19-year-old Charlotte Von Sledvin, a student in London, heard about him and traveled all the way to India to get her portrait made. As the stars had conspired, during the course of making the portrait, he was possessed by her beauty and she, with his sheer simplicity. Love had set in.

Charlotte took the Indian name Charulata and they both married following traditional rituals.

When it was time for Charlotte to leave, she asked her husband to come along, however, PK was still a student and wanted to finish his studies. When she offered to send air tickets later, he refused saying he would come to meet her on his own. After she left, the two kept in touch through letters.

PK’s love-filled heart had made the promise, but the reality of having no money to fulfill it stared PK in the eyes. But he was not one to give up. He sold all his belongings and bought a second-hand bicycle. Carrying all his paints and brushes along, he did the unthinkable.

He set out on a voyage to the Far West with a hope to reunite with his love. This was back in 1978. He reached Amritsar from New Delhi before entering Afghanistan, Iran, Turkey, Bulgaria, Yugoslavia, Germany, Austria and Denmark. His cycle broke down many times on the way and he even had to go on without food for days. But nothing could break his will.

After 4 months and 3 weeks of back-breaking journey, he finally reached Gothenburg, Sweden.

Those were the days when not many countries required visa for travelling.
Upon reaching, he was questioned by Swedish immigration officers who were amazed to see a man who had come from India riding a bicycle. PK told them the reason behind his visit and produced photographs of his marriage with Charlotte.
Authorities were surprised and did not believe that someone of royal blood from Europe would marry a poor Indian.

The sudden revelation made even PK skeptical whether his lady love would accept him or not.

When Charlotte learned about the man from India who cycled all the way for around 5 months, she drove to Gothenburg and received her husband with unbridled happiness. Her parents accepted Pradyumna as a part of their family by breaking a royal tradition that prohibited non-white people from residing with the nobles.

After 40 years of marriage, Dr PK Mahanandia serves as the Odiya Cultural Ambassador of India to Sweden and lives with his wife Charlotte and 2 children in Sweden. His village, that once shunned him as an untouchable, now gives a thundering welcome every time he makes a visit. Pradyumna is well known in Sweden as an artist and is working as an Adviser, Art and Culture, under the Swedish Government. Swedish Government in honour of their love has made films to document this immortal love of the century. His paintings have been exhibited in major cities of the world and have found places in the prestigious UNICEF greeting cards. On 4 January 2012, he was awarded an honorary doctorate degree (Degree of Honoris Causa) from Utkal University of Culture (UUC) in Bhubaneshwar, Odisha state, India. He was also designated as the Oriya Cultural ambassador to Sweden by the Government of Odisha. Renowned Bollywood film maker Sanjay Leela Bhansali is planning to make a film on the love story of PK Mahanandia and Charlotte.