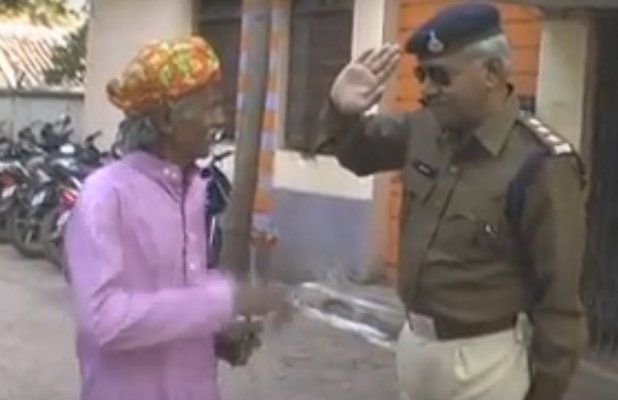 On the occasion of Republic day, when throughout the nation, Prime Minister, Chief Ministers, Collectors were hoisting flags, a beautiful gesture happened in a small village Khandwa in Madhya Pradesh. A brilliant initiative was taken by a Police Official who called a sweeper as a Chief Guest of the event. Initially, the sweeper was not ready to hoist the flag, but after the police official had urged him, he did it. The man was moved to tears with such beautiful gesture.

Town Incharge Anil Sharma requested 55-years-old Dinesh Bawre to hoist flags. A lot of people have praised this incident. It has set a unique example in the country. It is not every day that we witness such sights. After the flag hoisting, Dinesh said that this incident had become a beautiful chapter in his life.

TI Anil Sharma of Moghat Thana, Madhya Pradesh said, “These sweepers keep our environment clean and hygienic. Prime Minister Narendra Modi is putting so much effort in Swacch Bharat Abhiyan, and throughout the nation, 500 cities are competing against each other to score rank one. Going by this, I felt that the workers should be honoured. It is a matter of pride to hoist a flag” as reported by Patrika. Dinesh Bawre works as a sweeper in Municipal Corporation and comes every morning at 6 AM to Moghat Police Station. He has been working there since last 40 years. Like every day, he swept the floor before the event on 26 January. He was flabbergasted when Anil saluted him. Everybody was happy after the event.

The Logical Indian appreciates this nice action taken by Town Incharge Anil Sharma. This incident goes to show how a small gesture from our side can become a big event in someone’s life.