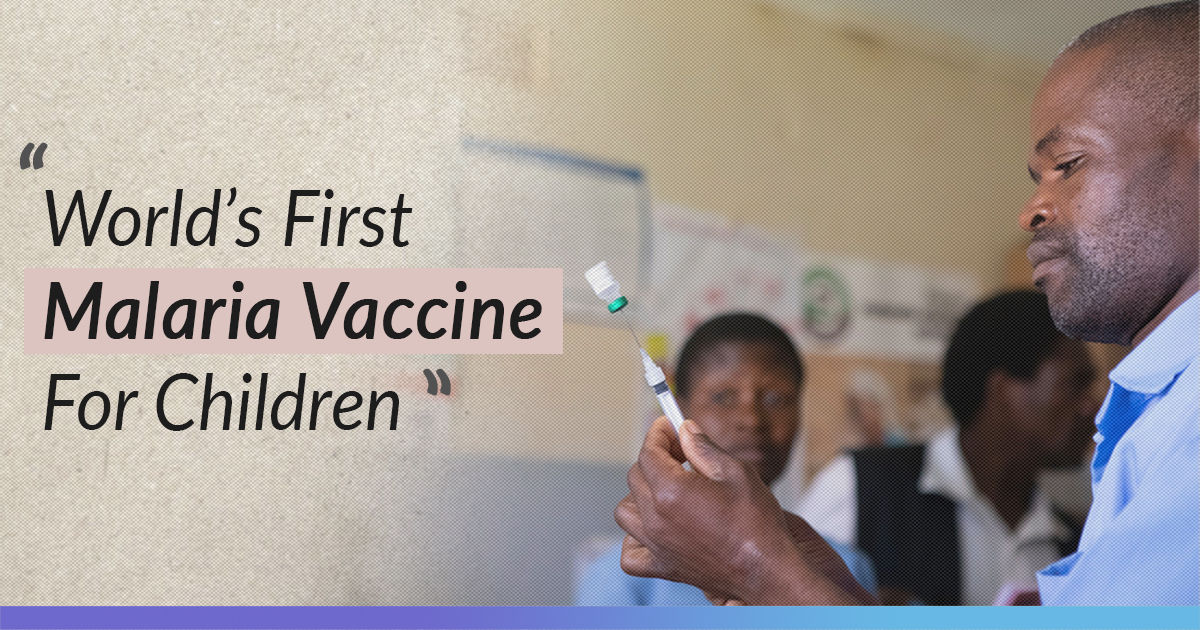 World’s First Malaria Vaccine Launched In Malawi: Know About It

According to The World Health Organization (WHO), Malawi has launched world’s first malaria vaccine RTS,S, on Tuesday in a landmark large-scale pilot programme to immunise young children and give them partial protection against the disease. Malawi is the first of three countries in Africa chosen for the pilot programme which aims to immunise 120,000 children aged two years and below. The other two countries are Ghana and Kenya, where this vaccine will be introduced in the coming weeks. The three Africa countries chosen for this pilot programme already run other programmes at a large level to prevent the disease which includes the use of bed nets. However, they still have a high number of cases. Overall 360,000 children will get vaccination.

Malaria is a serious disease which can cause life-threatening complications. It is one of the world’s leading killers, claiming the life of one child every two minutes. 435,000 people are killed every year due to malaria which includes mostly children. It is a consistent threat in African countries. WHO reports that about 285,000 children died before their fifth birthdays in 2016. The poorest children suffer the most and are at a higher risk of death says Dr Matshidiso Moeti, WHO Regional Director for Africa. In 2015, 90% of global deaths occurred in the African region due to this disease.

The RTS,S vaccine prepares the immune system to attack the malarial parasite. The vaccine works against the most deadly malarial parasite Plasmodium falciparum which is most prevalent in African countries. Although the vaccine provides protection to only a third of children of less than 2 years age from severe malaria, the clinical trials have found that the ones, who are immunised, probably develop less severe cases of the disease. Earlier, the smaller trials found that the vaccine prevented 4 in 10 cases of malaria including 3 in 10 cases of life-threatening severe malaria. According to the WHO, the pilot programme aims to provide evidence to WHO policy recommendations on the broader use of this vaccine. It will also study the following key points –

To date, RTS,S is the first and the only vaccine which can significantly reduce malaria in children. This vaccine has been more than 30 years in the making. Scientists from the drug company, GSK started creating it in 1987. Numerous years of testing backed by a host of organisations, including the Path Malaria Vaccine Initiative, and costing an estimated $1bn (£770m), have led to this point. The vaccine has nearly 40% efficacy rate. Although it is not as high as of the vaccines for other diseases, it adds to the preventative measures such as bed nets and insecticides that are already being used. The vaccine targets infants because they are most at risk. The RTS,S vaccine needs to be given four times a month – once a month for three months and then a fourth dose is given 18 months later.

While talking to the BBC, Dr David Schellenberg, who has been working on the development of the vaccine with the WHO said, “Nobody is saying that this is a magic bullet. It may not sound like much but we are talking about 40% reduction in severe malaria which unfortunately still has high mortality even when you have access to good treatment.”

As per a report by The Guardian, Gavi, the Vaccine Alliance, the Global Fund to Fight Aids, Tuberculosis and Malaria, and Unitaid are providing just under $50m (£38m) to fund the first phase of the pilots in Malawi, Kenya and Ghana.