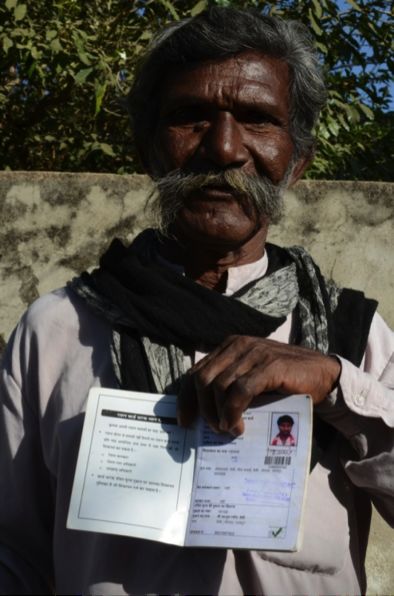 When He Asked For Ration, The PDS Dealer Threw Away His Card

The National Food Security Act was passed to secure freedom from hunger for the millions of Indians who still struggle to have two meals a day even after 69 years of Independence. After the passage of the law amidst a great deal of political debate, budget cuts and vociferous expansion plans, the poorest of the poor still go to bed with an empty stomach because of corruption and poor implementation of the Act.

The Rajasthan government implemented the Food Security Act from 2nd October 2013, a much-needed step, keeping in mind the severe droughts in the state. As many as 4.6 crore people were identified as actual beneficiaries of the Act. The herculean task of ensuring a smooth supply chain had many hurdles in distribution. The final blow to the scheme came when Vasundhara Raje government decided to re-visit the eligibility criteria. About 85 lakh beneficiaries were removed from the food security scheme after a fresh review. Today the program remains riddled with leaks and cracks which are hidden away in government statistics.

On 17th December, the 100 day accountability yatra reached Devla village, primarily a tribal region with many issues relating to land, ration and pension.

Nothing could have prepared our team for what we were to face next. In Kotda, the lines at the counter set up by the yatris to register complaints were nothing less than chaos. The yatra represented a chance to be heard. More than 80% percent of the complaints were related to rations. Moving from one counter to another, all we could see were bare hands holding ration cards. Blank ration cards!

It seemed a cruel joke considering that the 16th of December 2015 was celebrated as World Food Day. What would Maniya bhai from Gandhi Sarna think of a day like this? He is a daily wage laborer and manages to earn 1500-2000 INR per month and is the sole breadwinner in a family of nine members. “We go hungry sometimes,” says Maniya bhai. I take a look at his APL ration card, there isn’t much written apart from a few times he got wheat; the quantity decreasing with each new entry. A straight drop from 25 to 18 kilograms in one case. It has been more than 2 months and now even the wheat is out of sight. He says, “The dealer said you need to have Adhaar card to get Wheat”. This nothing but a clear violation of Supreme Court order.

An interim order issued in 2013 states it is not compulsory to have Aadhar card to avail government subsidies. Despite that, people are still being denied their rights on the basis of not having an Aadhar card.

The court had even instructed the Central government to publicise the decision widely as it is affecting implementation of welfare schemes. In this game of cards, it’s the common person, like Maniya bhai who loses his right to food.

Cannon to right of them

Cannon to left of them

Cannon in front of them

Storm’d at with shot and shell

Boldly they rode and well

Into the jaws of Death

When 65 year old Madha bhai and his son from Medi gram panchayat, Kotda asked for ration, their cards were thrown away by the PDS dealer. It has been more than eight months and there is no trace of ration they are eligible to get. Both of them APL card holders have seal on their cards. It’s the same dealer who had denied Maniya ration. Kadir Bhai, I get to hear his name again and again as I go around asking questions. Maniya and Madha bhai were just one of the many people who had seals on their cards and were still not getting ration. Sometimes I wish I hadn’t met all these people. It feels like the more you know, the more you know you don’t know. The more unfairness we unearth, the more remains buried, that needs to be hunted down and exposed. There is no end to it!