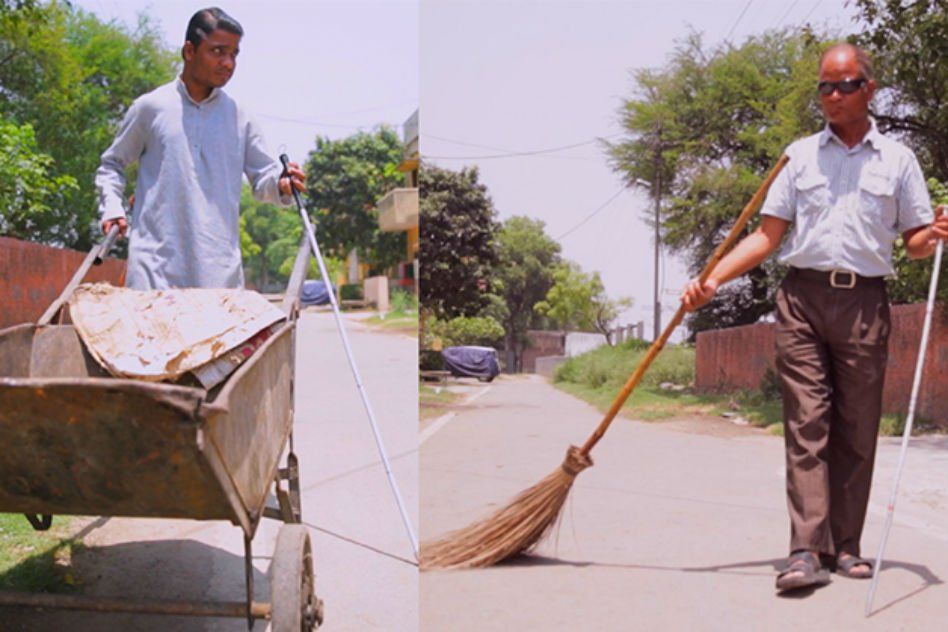 Shadab Alam walks at a slow pace. He’s 23 and visually challenged. In one hand he carries a white cane, the other holds a broom. Toiling under the scorching sun, he sweeps a dusty road in Pratap Nagar Railway Colony, New Delhi. Alam, a graduate from Satyawati College, Delhi University (DU), is not doing this by choice. Instead, he has been duped into working as a sweeper by the Indian Railways.

Having already overcome the hurdle of impaired vision to graduate from college, Alam was to a clerical job in the Indian Railways. However, Alam was in for a rude shock – after receiving his letter of appointment for a clerical post, he then received another letter which changed his job to that of a sweeper.

Alam isn’t alone. There are 50 others like him. When they passed the Indian Railways Group D examination, they were appointed as technical khalasi , wireless tele, computer operator, etc. None of this meant anything though, they soon found themselves working as sweepers.

“If we had to clean gutters and sweep roads we could have done this before we got our B.A. degrees. What was the point of doing a B.A. course? We completed this course with much difficulty and the Railwayexam question paper is very tough. We have waited three years for this job and we have been given a job in sanitation and cleaning instead,” says Alam.

25-year-old, visually challenged Ashwani Kumar, has done an M.A., in history from DU, with a special B.Ed. He said, “I got an appointment letter for the designation of Wireless Tele. My responsibility was to climb poles and handle wiring, so my senior told me that this job is not for you. Then they issued a letter for this cleaning and sanitation job”.

Despite their disability, the Northern Railways’ Delhi division has handed them brooms.

Apart from all the arguments, Indian Railways’ rulebook says this, “At the division-level, recruitment can only be made for the post of sanitation workers.”

Biswanath Sahu, a blind sweeper, has a different story to tell. He says that when he applied for the entrance examination, it was mentioned that it was for a desk job or peon, and not a sweeper.

One thing worth noting is that sanitation work puts the lives of these visually challenged men at risk. It is practically impossible for them to sweep, lift garbage and clean sewage. It would be interesting to see how Union Railway Minister Suresh Prabhu, who has actively been addressing Twitter complaints, would be able to do something to help these visually challenged people.

The Logical Indian is appalled at the insensitivity that is shown here by the railway officials. We would request our Railway Minister to take cognisance of the matter and reinstate these people to the original positions that were promised to them. Strict action must be taken against the officials who are responsible for this.