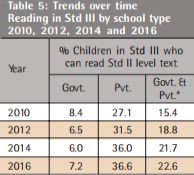 Less Than 10% Of 3rd Standard UP Students Can Cope With Classroom Teaching: 2016 ASER Survey

Recent survey by ASER shows the poor condition of rural education in the State of Uttar Pradesh.

The promotion of a student in India is based on the assumption that the child has “completed” the previous standard and is now ready for the next level of education. Thus, it is a given that a Std. III student comes equipped with the prerequisite knowledge, skills and proficiency required to cope with the class’ curriculum. However, the reality in the highest populated State of India, Uttar Pradesh, is quite different, according to the 11th edition of ASER 2016 survey of education in rural India.

In an average Std. III classroom in Uttar Pradesh, less than 10% (1 in 10) children can fluently read simple text. The percentage of children who struggle with recognising letters stands at an overwhelming 68% and approximately 7 out 10 children in the State cannot even read simple Hindi words used in everyday dialogue. ASER compares this data with Himachal Pradesh – the State leading the learning spectrum – and shows that almost half of all Std. III students in Himachal Pradesh are at grade level and only 20% struggle with recognising letters.

The efficacy of Std. III textbooks to teach Std. III children in Uttar Pradesh performs so poorly that almost everyone is left behind. Less than 1 in 10 (7%) Std. III students in Uttar Pradesh government schools can cope with the knowledge imparted to them in the classroom. With the States’ assembly elections around the corner, the Uttar Pradesh government needs to rethink and redesign its rural education strategy. Clearly, students are not making progress through the traditional classroom teaching method. The system which assumes that a child has understood and knows everything learnt in the lower standards before he is promoted to the next higher standard needs to be changed. According to the ASER survey, in States like Uttar Pradesh where learning levels are low, improvement is possible. The Indian government needs to keep an open mind in order to achieve that.