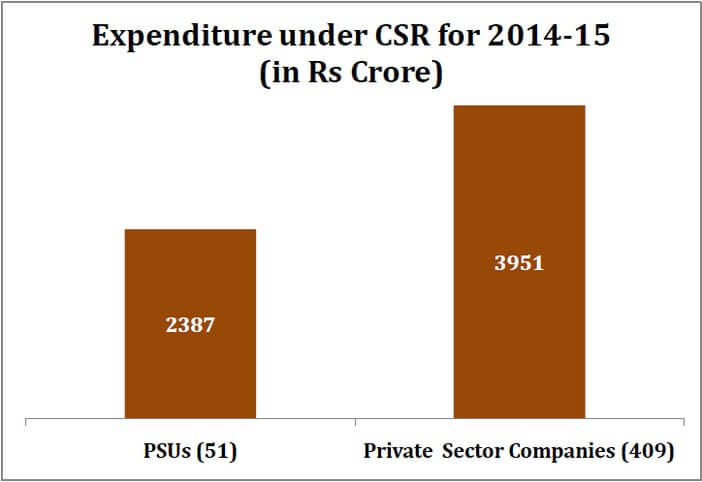 The provisions of Corporate Social Responsibility (CSR) under Section 135 of the Companies Act 2013 mandate companies with a net worth of Rs 500 crore or more OR turnover of Rs 1000 crore or more OR a net profit of rupees five crore or more, to spend at least two percent of their average net profits earned during three immediately preceding financial years on CSR activities.

The CSR rules also mandate each such company to constitute a CSR committee and also formulate a CSR Policy. The companies are also required to report annual expenditure under CSR in a prescribed format in the Annual Board Report. The companies can implement their CSR activities through trusts or foundations or even Section 8 companies. The rules also prescribe the list of CSR activities that can be undertaken. Recently a high-level committee set up by the Ministry of Corporate Affairs (MCA) has also given its recommendations to improve the monitoring of the implementation of CSR policies.

According to the data released by MCA, a total of 6338 crore rupees were spent on CSR activities by 51 Public Sector Undertakings (PSUs) and 409 Private companies. The 51 PSUs spent a total of 2387 crores while the 409 private companies spent 3951 crore rupees. PSUs on an average spent 46.8 crores while Private Companies spent 9.7 crores on average. Out of the top 20 spenders under CSR, 9 are PSUs and the remaining 11 are private companies. Reliance Industries spent the most with 760.6 crore rupees followed by ONGC with 495.2 crores. Three out of the top 10 are companies from the IT Sector (Infosys, TCS & Wipro). State-owned NTPC, NMDC & Oil India are also in the top 10 spenders. The top 10 spenders accounted for 43.5% of the total CSR spend while the top 20 companies accounted for 56% of the total CSR spend. A total of 1790 projects were undertaken under CSR in 2014-15 in 36 different States/UTs. Maharashtra leads in the number of projects with 202 followed by Gujarat (111 projects). 97 projects were in Tamil Nadu while 95 projects were in Karnataka. Rajasthan (89), Uttar Pradesh (80), Andhra Pradesh (79), West Bengal (79), Madhya Pradesh (71) and Delhi (66) are the other states in the top 10. Surprisingly, Telangana that has a large presence of IT Companies had only 47 projects and is in the 15th position. Eradication of Poverty, Promotion of Education & Livelihoods get the Lion’s share

Out of the various subjects and activities indicated in Schedule VII of the Companies Act, 1463 crore rupees were spent on activities targeted at promoting Education, Vocational skills, and livelihood enhancement. Eradicating Hunger, Poverty & Health Care was the next favorite with a spending of 1422 crore rupees. 1189 crore rupees were spent on Environment sustainability activities. Rural Development projects saw 724 crore rupees of spending. An amount of 42.6 crores was contributed to the Swatch Bharat Kosh and 15.5 crores to the Clean Ganga fund. A contribution of 125 crores was made to the Prime Minister’s National Relief Fund (PMNRF).