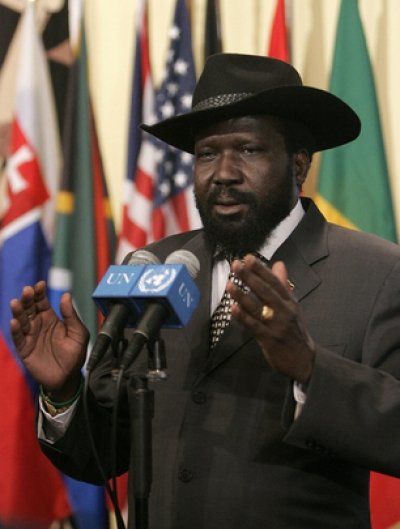 2 Lakh Killed, 40 Lakh Made Refugees: The World’s Newest Country Is On The Road To Genocide

“There is a steady process of ethnic cleansing under way in several areas of South Sudan using starvation, gang rape and the burning of villages. Everywhere we went across this country we heard villagers saying they are ready to shed blood to get their land back. Gang rape so prevalent that it’s become ‘normal’ in this warped environment but what does that say about us that we accept this and thereby condemn these women to this unspeakable fate? The stage is being set for a repeat of what happened in Rwanda and the international community is under an obligation to prevent it.”

“There’s no such thing in South Sudan. There’s no ethnic cleansing.” Formed in July 2011, South Sudan is the world’s newest country. The product of a long-awaited referendum on independence, South Sudan’s birth was heralded around the world. It was hailed as a historic day of freedom and hope for one of the world’s poorest and conflict-ridden countries.

“Today is a day of triumph for all who cherish the rights of all people to govern themselves in liberty and law. No citizen of South Sudan should ever take their independence for granted. You have waged a righteous struggle to win your liberty and chart your own course among the community of nations. Let that always serve as a reminder to lift up those who are denied their rights, those who hunger for freedom, and those who suffer in places where hope seems to be forgotten. For South Sudan, independence is not a gift that you were given. Independence is a prize that you have won.”

The peace would not last.

A few months after independence, South Sudan began to descend into civil war. In 2013, 2014, 2015, and 2016, South Sudan was listed as among the five most fragile countries on earth by various international observers and think tanks.

The world’s newest country is now a land of lawlessness where gang rapes and mass murders are the new normal. Additionally, South Sudan is on the road to a genocide of a historic scale. The road to independence

Sudan was an ethnically and religiously complex country. Broadly speaking, the north had Muslims while the south had Christians and native religions. These differences, along with many historic and political reasons, were the cause for a brutal 22-year-long civil war between the north and south.

A tense peace process mediated by neighbouring African countries and foreign powers culminated in a peace agreement in 2005.

Finally, in January 2011, a referendum was held in the south on the question of whether the country should be split in two. The vote passed overwhelmingly – 99% of people voted for independence from the north.

On 9 July 2011, after decades of war and uncertainty, the Republic of South Sudan came into existence.

“Let our cultural and ethnic diversity be a source of pride and strength, not parochialism and conflict. Let all the citizens of this new nation be equal before the law and have equal access to opportunities and equal responsibilities to serve the motherland. We are all South Sudanese. We may be Zande, Kakwa, Nuer, Toposa, Dinka, Lotuko, Anyuak, Bari and Shiluk, but remember you are South Sudanese first!”

South Sudan’s main religious groups are Christians and those who follow native religions.

Unlike its religious classification, the country’s ethnic divisions are extremely complicated. South Sudan has over 60 ethnic groups. The two largest groups are the Dinka and the Nuer.

South Sudan’s first – and present – President is Salva Kiir. He is from the Dinka tribe. In an attempt to ensure the unity of the new country, Kiir appointed Riek Machar (of the Nuer tribe) as his Vice President.

Kiir assumed that appointing Machar as his Vice President would unify the two main tribes of the country – the Dinka and the Nuer – and bring stability.

However, Kiir’s gamble did not pay off.

Vice President Machar began to vocally criticise Kiir’s leadership in 2013. He later announced that he would challenge Kiir in the election of 2015. In response, Kiir fired Machar and his cabinet ministers.

The tense peace between the Dinka and the Nuer, symbolised by the unity between President Kiir and Vice President Machar, was broken.

In December 2013, the civil war broke out. Forces loyal to Kiir clashed with those loyal to Machar. The fighting rapidly spread throughout the country and evolved into a full-scale ethnic conflict between the Dinka and the Nuer.

A handful of peace agreements have been signed over the course of the war, but they have all failed. Fighting has continued unabated, the use of child soldiers has been rampant, health care and the national economy have broken down, and children have become the most adversely affected demographic. The situation remains highly unstable.

How bad are the numbers?

The road to genocide

“… Many of the warning signals of impending genocide are already there – an existing conflict, resort to polarised ethnic identities, dehumanisation, a culture of denial, displacement based on ethnicity and in some places indications of systematic violations and planning – but the important thing is there is still time to prevent it.”

In 2016, the United Nations warned that the stage was set for genocide in South Sudan. Even though the Kiir Government has said that it only targets rebels, accounts of refugees and reports by human rights groups have pointed to large arms imports and merciless killing of civilians by the South Sudanese Government.

Tensions between the tribes are escalating. The killings are particularly widespread since it is very easy to distinguish between the Dinka and the Nuer – the two tribes use different markings on their foreheads. All sides are recruiting new soldiers and stockpiling more weapons.

Back in 1994, tensions between local tribes in the East African country of Rwanda escalated into a civil war and then an all-out genocide which killed between 500,000 and 1,000,000 people. The international community stood by, watching the violence, and did not intervene to end it.

It was one of the most shameful chapters in human history.

After Rwanda, the world promised that it would never allow such an incident to happen again.

23 years later, the stage is set for a similar genocide in South Sudan. The world remains as mute and uncaring as it was in 1994.