At the end of 2016, there are close to 3 lakh under trial prisoners in Indian jails. Many of them are eligible for bail as per Sec 436A of the CrPC, but are still in jail due to lack of awareness. State Governments have failed to act despite a Supreme Court order.

Overcrowding of jails in the country has been an often talked about issue. As per latest available government data (end of 2016), a total of 4,33,003 inmates were lodged in various jails across India, 14% more than the capacity of 3,80,876. Government data also shows that close to 3 lakh or 2/3rd of all the prisoners are under trials.

As per government data, a total of 2,93,058 under trials were lodged in jails across India by the end of 2016. Uttar Pradesh & Bihar together account for more than 96,000 of these under trials, about 1/3rd of the under trials in the country. 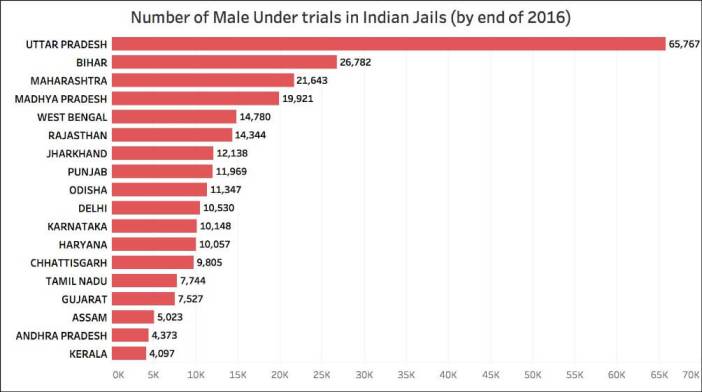 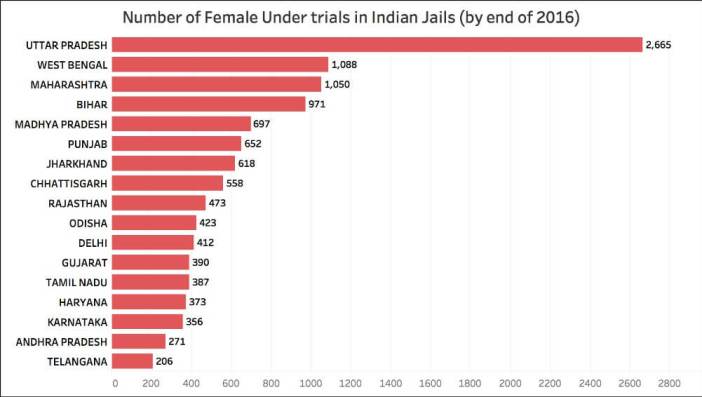 Why are there so many Under trial prisoners?

There are two major reasons for such a large number of under trial prisoners. One of them is the huge pendency of cases resulting in many of the accused langushing in jails. The second reason and most important reason is the lack of implementation of an existing law.

Section 436 of the CrPC was amended in 2005 to include a new section 436A. Under Section 436A, an under trial prisoner (UTP) has the right to seek bail on serving more than half of the maximum possible sentence on their personal bond. No person can be detained in prison as an undertrial for a period exceeding the maximum possible sentence. This provision is, however, not applicable for those who are charged with offences punishable with the death sentence.

The Ministry of Home Affairs (MHA) has noted in many of its advisories on the issue that it is only the poor who have not been able pay for the surety that have continued to languish as under-trials for very long periods and that too for minor offences. The lack of adequate legal aid and a general lack of awareness about rights of arrestees are principal reasons for the continued detention of individuals accused of bailable offences.

Guidelines for implementation of Section 436A not followed

Noting that there is a great lack of awareness of this provision, the MHA has issued multiple advisories to state governments on this issue since ‘Prisons’ is a state subject. In its advisory issued in January 2013, the MHA has asked states to constitute a review committee in every district that will meet every 3 months to review the cases. It has also asked jail superintendents to survey all cases and prepare a list of UTPs to be send to the District Legal Services Authority. It has also asked states to educate the UTPs and extend legal aid. But none of these guidelines have been strictly implemented. 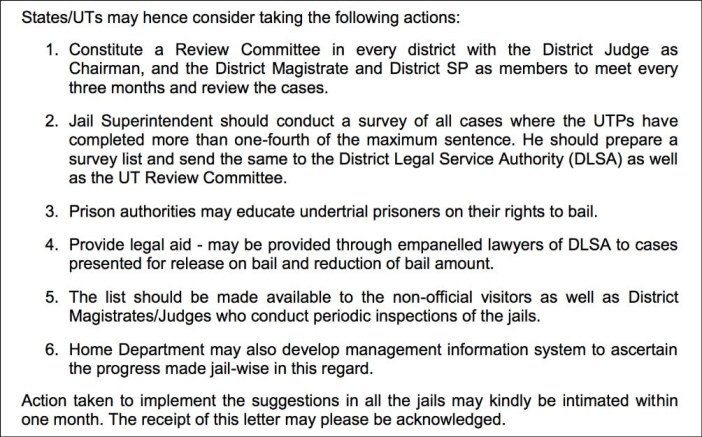 Little progress even after the Supreme Court order

The Supreme Court in a related case directed the governments in 2014 (in W P(Criminal) 310/2005) that concerned judges should hold one sitting in a week in each jail for two months starting from 1st October, 2014 for the purposes of effective implementation of 436A of the CrPC. The case is still pending in the court.

Even in May 2015, the Supreme Court directed the National Legal Services Authority to coordinate with the MHA to ensure urgent review of such UTP cases for granting them bail. A Social Justice Bench of Justices Madan B. Lokur and U.U. Lalit noted that 67 per cent of those lodged in the prisons in the country are under trials who are too poor to get bail.

In September 2014, the MHA issued another advisory to the states with clear instruction for classification of UTPs. The advisory explained the calculation of half the maximum possible sentence in cases where a person is accused of multiple offences and under multiple sections of the IPC.

Even after all these advisories, under trials and especially those from the disadvantaged sections of society continue to languish in jails while their trials drag on for years, often for petty offences. We could decongest our jails and provide relief to lakhs of under trials provided our governments are willing to implement the law.

What can we do as Citizens?

One Ms. Divya Iyer filed an application under RTI with the Tihar Jail authorities. The case went up to the Central Information Commission and the CIC in a detailed order, directed the Delhi home department officials to issue directions to all jail authorities. We could do the same.