BJP’s official twitter handle posted an infographic which said that the current government repaid more than ₹ 1.3 lakh crore worth oil bonds which were issued during the previous UPA government. RTI response from PPAC under the Ministry of Petroleum, confirms that the Modi government repaid only ₹ 3,500 crore worth oil bonds while bonds worth more than ₹ 1.3 lakh crore are still pending.

Factly had earlier done a Fact Check based on data available in the budget documents to conclude that the Modi government has only repaid oil bonds worth ₹ 3,500 crores. Now, the Petroleum Planning & Analysis Cell (PPAC) under the Ministry of Petroleum & Natural Gas has confirmed that the government indeed repaid only ₹ 3,500 crore worth oil bonds. 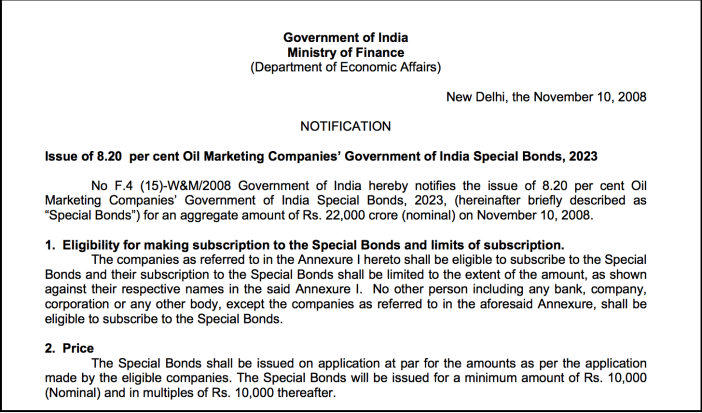 What is the worth of Oil Bonds pending to be repaid by the government?

The PPAC’s reply clearly indicates that since 2004-05, Oil Bonds were issued on 17 occasions totalling an amount of ₹ 1.42 lakh crore. Since then, only six such bonds have matured and the government has repaid them. Two bonds matured in 2009, two in 2012 and the remaining two in 2015. The pending amount for bonds matured in 2009 & 2012 was repaid by the UPA-2 government. Only two bonds with a total amount of ₹ 3,500 crores (₹ 1,750 crores each) matured in 2015 and this amount were repaid by the current government. A total of 11 bonds are yet to mature with a total amount of more than ₹ 1.3 lakh crore. The earliest maturity is only in 2021. The interest payments of Government of India are captured in a document titled ‘Interest Payments’in the demand for grants of the Ministry of Finance under the expenditure budget. All the interest payments made by the government are given in this document including the interest on special bonds to oil companies. The data of the last 20 years suggests that various government (both UPA & NDA) have been paying interest on oil bonds. The interest liability increased substantially during the UPA-1 because of the issue of multiple oil bonds. The UPA-2 paid a total of ₹ 53,163 crores in interest for oil bonds in the 5-year of the period between 2009-10 and 2013-14. On the other hand, the current NDA government paid a total of ₹ 40,225 crores in the 4 year period between 2014-15 and 2017-18. They have also budgeted an interest payment of ₹ 9989.96 crores in 2018-19. 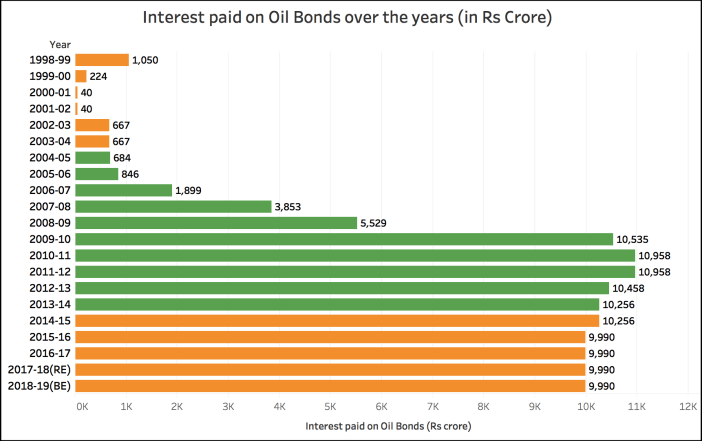 The interest payments for the last 4 years also clearly indicate that there was no change in the outstanding amount, hence no repayments in the last four years except in 2015. Though it is true that the Modi government paid an interest of over ₹ 40,000 crores in the last 4 years, the UPA-2 had also paid similar if not a greater amount of interest during their term.

The total amount of excise duty collected by the Government of India between 2014-15 & 2017-18 is ₹ 7,49,485 crore. During the same period, the government made a total payment of ₹ 43,725 crores towards repayment & interest on oil bonds. The payment on oil bonds is less than 6% of the total excise duty collected on petrol/diesel. Hence to say that this was the reason for the increase in taxes does not seem justified. 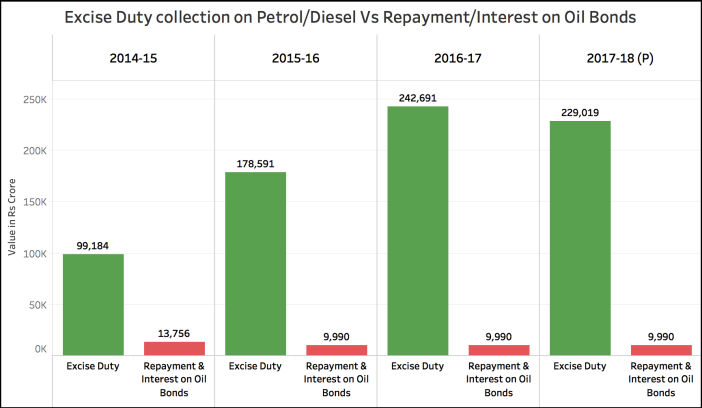