Not Maintaining ‘Minimum Balance’ In Your Account? Beware Of The Penalty

Between April & November 2017, Public Sector banks collected Rs 2321 crore as penalty from citizens for not maintaining Minimum Balance in their accounts. Citizens have the right to demand transparency in the levy of penalty as per RBI guidelines.

State Bank of India’s decision to impose penalty for not maintaining a minimum balance in savings bank accounts led to a huge furore this year. While the bank did not take back the decision, it made a downward revision of the monthly average balance amount for accounts in different areas. Now, data shared by the government proves that the furore was not without a reason. Public Sector Banks collected Rs 864 crore in penalty from citizens in the year 2016-17 for not maintaining minimum balance. The penalty amount collected increased to Rs 2321 crore in just the first eight months of 2017-18.

The penalty amount collected by public sector banks for not maintaining minimum balance has more than doubled in 2017-18. The total penalty collected in 2016-17 stood at Rs 864 crore while the amount for the first 8 months of 2017-18 has already reached Rs 2321 crore. 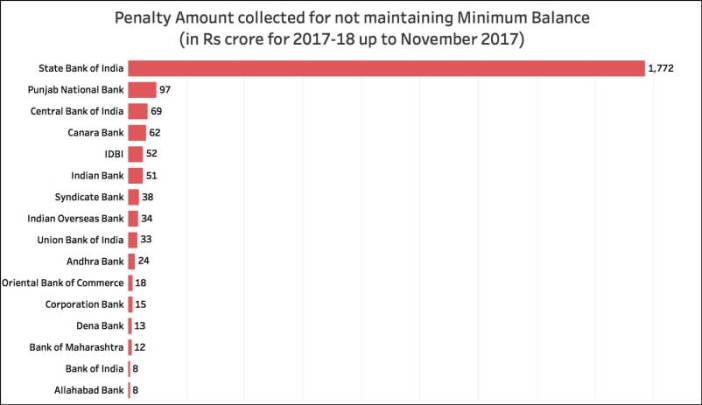 These guidelines have to be followed for levying the penalty

The Reserve Bank of India (RBI) has directed the banks that they should inform the customers at the time of opening the account, regarding the requirement of minimum balance and details of penalty if such minimum balance is not maintained, in a transparent manner.

As per RBI guidelines issued in the year 2014, the levy of penalty/charges for not maintaining minimum balance in savings bank account is subject to the following guidelines. These guidelines came into effect from April 1, 2015.

What about student accounts used for scholarships?

Students who are beneficiaries of various Central/State Government Schemes including scholarship schemes have suffered because of the minimum balance requirements. The RBI has made it clear through a circular issued in 2014 that accounts of all student beneficiaries under the various Central/State Government Scholarship Schemes should be free from restrictions of minimum balance and total credit limit.

Is there a way to open a savings account without the ‘minimum balance’ requirement?

In the year 2012, the RBI issued guidelines regarding the ‘Basic Saving Bank Deposit (BSBD) accounts’, that provide normal basic banking services without requirement of any minimum balance. As per these guidelines, a BSBD account can be opened by any individual without any restrictions or eligibility criteria. No restrictions like age, income etc. are applicable for opening a BSBD account. All the accounts opened under Pradhan Mantri Jan Dhan Yojana are BSBD accounts.

All other services like debit card etc. are extended to the BSBD accounts free of charge. However, the following restrictions will apply for the accounts opened in this category

For those willing to maintain an account with minimal banking activity, switching to BSBD account may be a better option.