“Friends, today I will tell you a way to get Muslims out of India…Play ‘Vande Mataram’ in the entire nation and all Muslims will leave.” 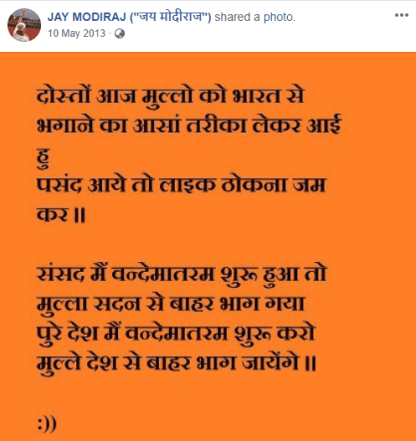 Jay Modiraj was created in 2012 and has since managed to gather a following of over 1.4 million. The “info and ads” section of the page revealed that it had been running a Facebook advertisement to garner likes. A mere scroll through Jay Modiraj reveals that it not only pursues an anti-Muslim narrative but also portrays BJP as the sole party working for the needs of the majority. In an image posted on October 31, 2018, Jay Modiraj showed the Congress President Rahul Gandhi in a skull cap juxtaposed with a picture of PM Modi with clasped hands. The caption to this image read – “One fights for truth and the other advocates for terrorism.” 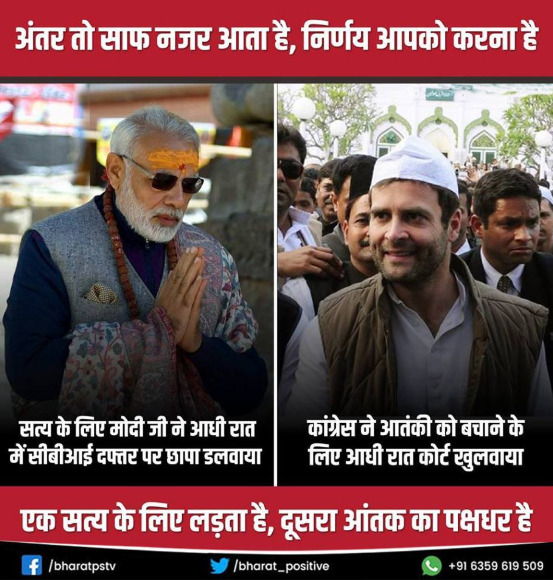 This page’s posts are not only hateful in nature but it also churns out misinformation on a regular basis – from portraying Rahul Gandhi as offering Namaz in a temple to declaring that India took no loans from the World Bank between 2015 to 17.

Through the length of this article, Alt News has presented many other such instances of misinformation circulated by Jay Modiraj. But before that, let’s find out the individuals who have been involved with this page at various points in time.

Straight out of BJP IT Cell?

To identify individuals who promoted Jay Modiraj when it was created, Alt News looked for the earliest instances of its posts being shared on Twitter. We found one such individual – @Sachinpatel1979 – who regularly circulated Jay Modiraj posts in 2013. This person’s bio read – “works at Jay Modiraj team”. 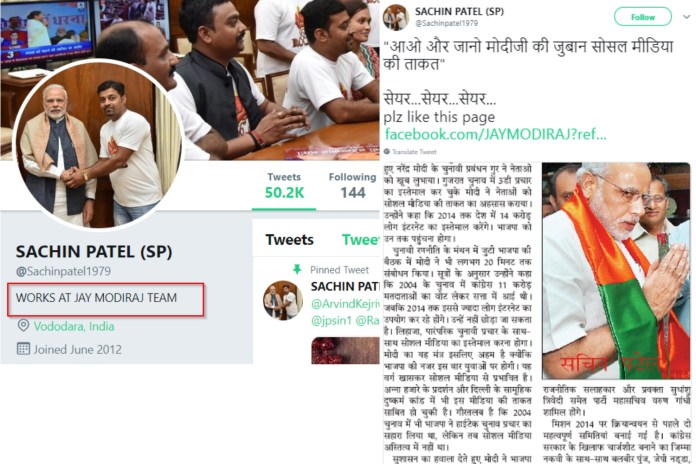 This was the same name that adorned the stamp – “Jay Modiraj Sachin Patel” – on several posts by the Facebook page. 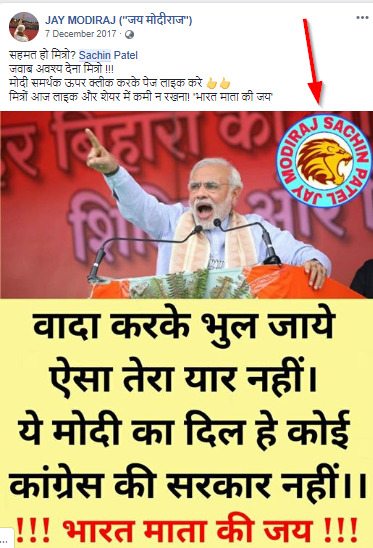 Another individual associated with Jay Modiraj was Rajesh Soni. Alt News discovered him by searching the word ‘admin’ in the ‘post section’ of the Facebook page.

Incidentally, Rajesh’s Facebook profile picture was similar to Sachin Patel’s – one where he can be seen shaking hands with PM Modi.

Alt News discovered another individual who had uploaded the same photographs with the Prime Minister as Sachin and Rajesh. On September 21, 2018, one Bhavin Patel whose Facebook bio says that he is a member of BJP IT Cell and RSS posted – “The best thing about BJP social media is that it does not operate via randomly hired people but karyakartas who have a vision. Moreover, our biggest strength are the lakhs of supporters and well-wishers. Your suggestions will help us use social media rightly and enable us to make it more attractive so that Modiji wins in 2019. Jay Modiraj team (translated).” 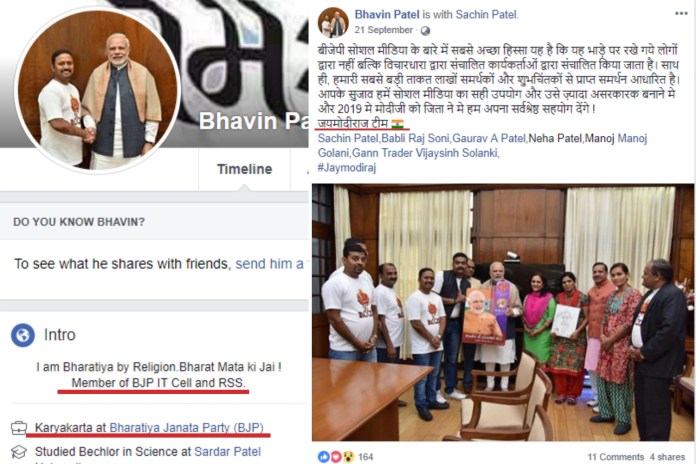 Bhavin had tagged several people on his post (in the collage above), which led us to many other individuals associated with Jay Modiraj. One more administrator whom we found was Gaurav Patel. In a 2014 post, he appealed to the followers of Jay Modiraj to like a page he had dedicated to himself. Gaurav’s display picture was also with PM Modi. 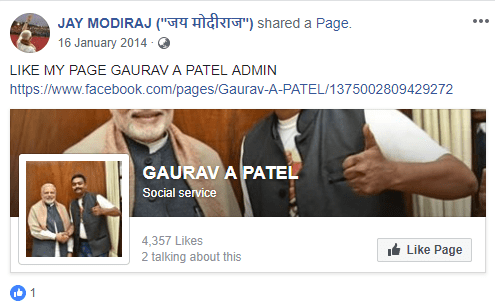 Bhavin had mentioned another individual – Manoj Golani. As it turned out, he too was a part of the social media meeting between PM Modi and Jay Modiraj team. Moreover, his Facebook bio mentions that he works at Jay Modiraj. 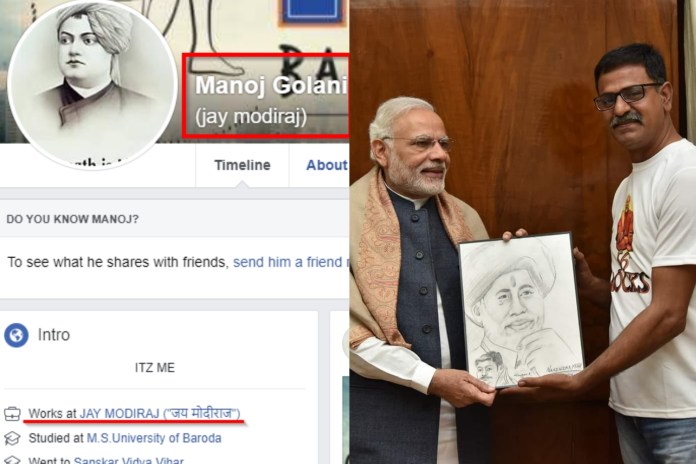 Another admin whom we discovered was Neha Patel. In one of its posts, Jay Modiraj mentioned Neha (who was also present in the social media meet) as one of its admins. Incidentally, she happens to be a ‘Gau Raksha karyakarta’. In July 2016, Jay Modiraj shared Neha’s post about her appearance on NDTV after the Una lynching where she claimed that the men were not beaten by cow vigilantes. 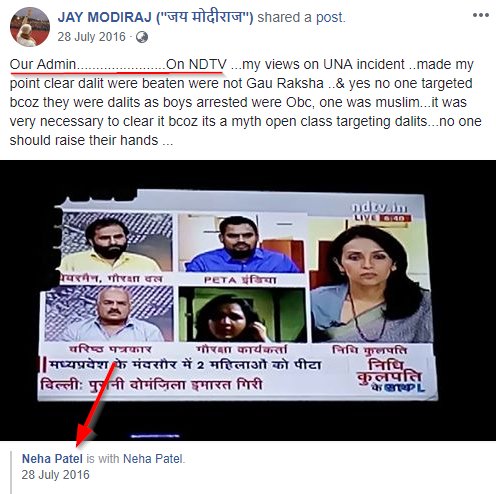 Another name that came up during our investigation was Mehul Patel.

A plethora of administrators who seem to be closely associated with BJP IT Cell is behind a factory of hate and misinformation. Listed below are some of the misleading posts circulated by Jay Modiraj that drew thousands of likes and shares.

In September this year, Jay Modiraj shared a post claiming that – “In the last 70 years, there were only three years India did not take any loans from the World Bank – 2015, 2016, 2017. This is Modi’s accomplishment (translated).“ This post was shared nearly 15,000 times.

Alt News had debunked this fake news in the past when we found that loans worth more than US$ 96,560 million for 50 projects had been approved for India during the time period in question.

2. Image of a Buddhist monk ceremony shared as a rally for Lord Ram

An image of an alms-offering ceremony to 10,000 Buddhist monks in Thailand was shared by Jay Modiraj with the caption – “Hail Lord Rama.”

Photographs of the ceremony taken from different angles show that the men in saffron robes are not devotees of Lord Ram but Buddhist monks.

3. Declared Congress world’s 4th most corrupt party based on a fakeBBC website

On September 17, another piece of misinformation shared by the Facebook page claimed that “according to BBC, Congress stands at the 4th position among the top 10 most corrupt political parties in the world.”

A fake news website BBCNewsHub.com had published an article in July 2018, which was shared by as a recent and authenticate “list of world’s most corrupt political parties” by several Facebook pages. Alt News had debunked the false claims in this article.

This particular claim circulated by Jay Modiraj was shared over 7,900 times.

However, as it turned out, the former Congress President is not the world’s 4th richest woman. The rumours viral on social media are based on a six-year-old misreport that is being circulated as a recent event. Alt News debunked this claim here.

A fake quote attributed to Indian Army chief General Bipin Rawat said – “Army chief Bipin Rawat said that to become a leader, it should be made mandatory to serve the country in the army for 5 years. Believe it or not, 80% of India’s garbage will be cleared automatically. How many people agree with his statement. Share this, if you do -translated). This post was shared over 6,000 times.

The Indian army clarified through their social media channels on September 11, 2018, that the statement being circulated was false. Alt News had reported this in an earlier article.

“Friends, look at this photo carefully, it is the scene your eyes were waiting to see in Indian history -translated.” An image with the above text was shared by Jay Modiraj (“जय मोदीराज”), depicting Prime Minister Narendra Modi surrounded by world leaders.

According to an article published by Business Insider on July 11, 2017, the original image was taken by a photographer, Kayhan Ozer for Getty Images, an American stock photo agency. The authentic image was captioned, “President of Turkey Recep Tayyip Erdogan (R) talks with US President Donald Trump (L), accompanied by Foreign Affairs Minister of Turkey Mevlut Cavusoglu (2nd R), during a session within the G20 Leaders’ Summit in Hamburg, Germany on July 07, 2017.” In the original photograph, the middle seat in vacant. Alt News had earlier reported how different variants of the same image were circulated on social media. 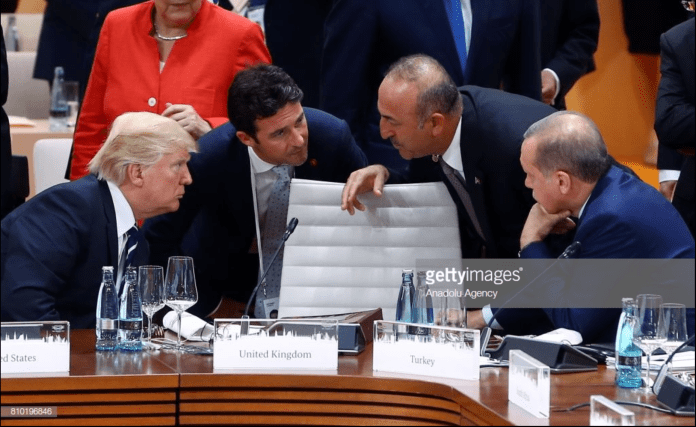 In a photograph viral in October 2018, Congress President Rahul Gandhi can be seen sitting inside a temple with his hands folded in front of him. He had offered prayer at the Achaleshwar Shiv temple in Gwalior. However, this was circulated with the false narrative that Gandhi was offering Namaz in a temple.

As it turned out, the image was from 2011 when the then Chief Minister of Gujarat Narendra Modi was condoling the death of veteran scribe Bhupat Vadodaria. The official website of Narendra Modi had uploaded the same image. Alt News had debunked the misinformation in this article. 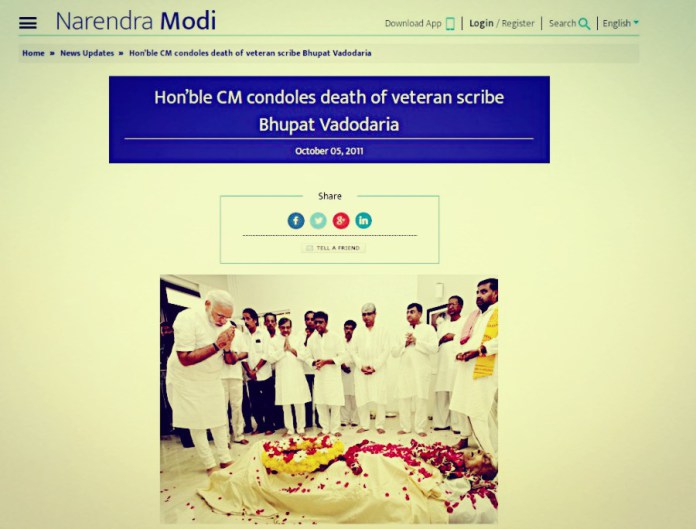 9. Military drill videos of Russia and Indonesia posted as that of the Indian army

Jay Modiraj posted a purported Indian army video on October 26 captioned as – “Indian army: The one which is saluted by the world (translated).“

As it turned out, the video was not of an Indian army drill but were clips of the Russian and Indonesian military. Boomlive had busted the video here.

An October 30 post was captioned by Jay Modiraj as – “Despite continually insulting Hindus for 70 years, Congress gained their votes. However, the time has now changed (translated).” This narrative was affixed to an image of Shashi Tharoor where he allegedly calls Modi a “scorpion on a Shiva Linga that cannot be removed even if hit with slippers.” 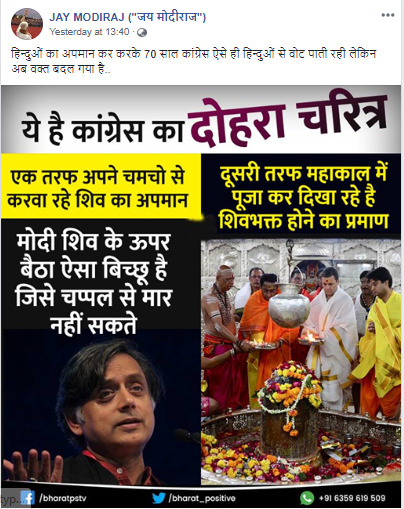 Jay Modiraj’s post was based on the Congress MP’s speech at the Bangalore Literature Festival where he wasn’t comparing PM Modi with a scorpion but was quoting an unnamed RSS leader. Alt News had reported the misleading claim in an earlier article.

A Facebook page with over a million followers is spreading misinformation on a daily basis. From what it seems, the ones managing this page are not mere supporters of the BJP but enjoy a certain closeness with the party, which begs the question – who is funding the page?

[This article has been updated to include the names of Bhavin Patel and Manoj Golani.]