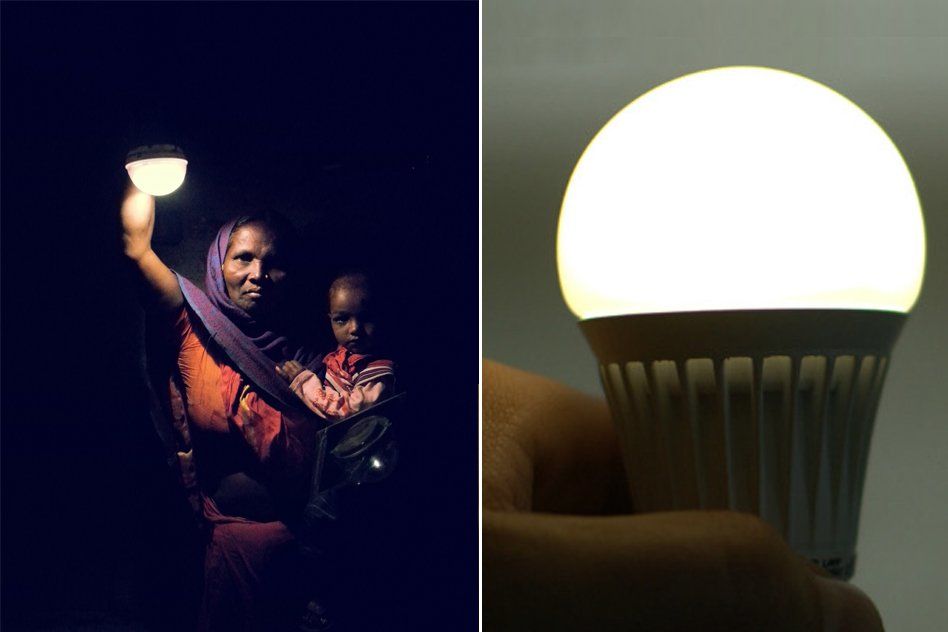 How Switching To LED Bulbs Can Lighten The Home Of The Needy As Well As Save Your Money!

Under the flagship of UJALA (Unnat Jyoti by Affordable LED’s for all) scheme by the Ministry of Power, Coal and Renewable Energy which aims at a target of replacing 77 crore incandescent lamps with LED bulbs. Under this scheme, the cost of LED bulbs has come down drastically costing merely Rs. 85 to 95. This sudden decline of prices was observed after the cost of procurement of LED bulbs was fixed at Rs 54.90 per unit, which is an 83% reduction from its price 20 months back, according to Power Minister Piyush Goyal.

How will LED’s affect common people?
The distribution of LED bulbs can directly impact the pockets of the consumers by providing LED bulbs at affordable prices. Energy Efficiency Services Limited (EESL), a public energy service company under the union ministry of power claims that the end consumers can save as much as Rs. 4,000 per annum in their power bills by using LED bulbs

The impact of UJALA has been such that India’s share in the global LED industry has risen from 0.1 percent to 12 percent. 13 Indian states including Rajasthan, Maharashtra, Karnataka, Kerala, Uttar Pradesh, Himachal Pradesh, Delhi, Andhra Pradesh, Puducherry, Jharkhand, Bihar and Uttarakhand are already part of the movement and EESL plans to roll out the scheme in a few more states in the coming months.

UJALA, launched by the Hon’ble Prime Minister on January 2015, is the largest non-subsidised LED programme in the world. The programme has led to significant savings to the consumers who are using these bulbs.

UJALA’s achievements
The government has done a phenomenal job in implementing UJALA. According to the website of the Domestic Efficient Lighting Programme (DELP), the government has sold 9.32 crore LED bulbs as of April 11, the utilisation of which would result in a reduction of 28,878 tonnes of carbon dioxide per day, or almost 10 million tonnes a year with a cost saving of Rs. 13.2 crores per day. To put it in perspective, 10 million tonnes of CO2 is equivalent to nearly 54 million railcar worth of coal burned.

In addition, LED bulbs have the long lasting and have a long life with 25,000 hours (around two years and 10 months) as compared to 8,000 hours for CFL bulbs and 1,200 hours for incandescent bulbs.

Other initiatives
The National Energy Efficient Fan Programme (NEEFP) again aims to distribute energy efficient fans which will be 30% more effective will help reduce household electricity bills and the country’s overall carbon dioxide emissions. With this programme, it is expected that the electricity bill in households will sharply fall by Rs. 700-730.

Under the Street Light National Programme, the government has converted 7,50,780 streetlights to LED, which, according to the programme website, has resulted in a saving of more than 2.72 lakh units of electricity per day.

Power Minister’s claims
Power Minister Piyush Goyal had repeatedly emphasised that the country would save 100 billion units of electricity a year by switching over to LED, which, he said, translated to a saving of Rs.40,000 crore across all households.

How can the consumers buy the LED bulbs?
Consumers can visit www.delp.in and click on their respective state to locate the distribution kiosk closest to their place. The energy saved from the distribution of 9 crore LEDs can help lighting needs of 23 lakh Indian homes for an entire year. Every person who switches to LED bulbs will help lighting up someone’s home through energy savings.

The Logical Indian lauds the effort by the Power ministry in promoting the LED bulbs. We hope that the scheme reaches the common people on a massive scale and in the coming future a huge amount of people will use LED bulbs. This is a just a small step in which we can contribute towards lightening someone else’s home. After all, with LED bulbs being used at homes, power demand may come down significantly, thereby bringing down coal consumption, an economical as well as eco-friendly expectation.