Thousands of Indian students go abroad for their Medical Education owing to fewer seats & stiff competition in the country. The students who pursue their medical education abroad are required to get through the screening test conducted by the MCI before they can start medical practice. Between 2012 & 2016, only 16% of those appeared for the screening test have passed.

The annual intake of all medical colleges in India is about 67000 while the annual intake of engineering colleges is about 25 times that number. Lack of sufficient number of medical colleges has been resulting in stiff competition for the existing medical seats. This has in turn given rise to an increasing trend of Indian students going abroad for their medical education. While some countries provide standard medical education, most countries chosen by Indian students do not maintain similar standards. Hence, only 16% of them pass the Foreign Medical Graduate Examination (FMGE), a prerequisite to start medical practice in India.

Indian Graduates with Foreign Medical Degrees – What does the law say?

Indian students can seek medical qualification from any recognized medical education institution in a foreign country. To be able to practice in India after obtaining their degree abroad, the students are required to register with the State Medical Council (SMC). Further, SMCs register a student with foreign medical qualification only after he appears and gets through the Foreign Medical Graduate Examination (FMGE) conducted by the National Board of Examination (NBE). The FMGE is conducted twice a year in June & December and a candidate has to score a minimum of 50% marks in each of the papers to be declared passed. A candidate has a maximum of 3 attempts to pass the examination.

This is a statutory requirement as per section 13(4A) of the Indian Medical Council Act, 1956 amended in 2002. Those who hold an under graduate as well as post graduate medical degree from the following countries need not take the FMGE and they can directly be registered by the SMCs.

What percentage of candidates pass the Screening Test (FMGE)? 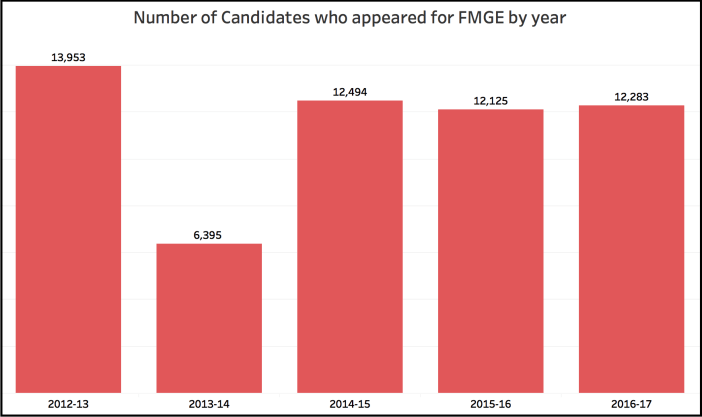 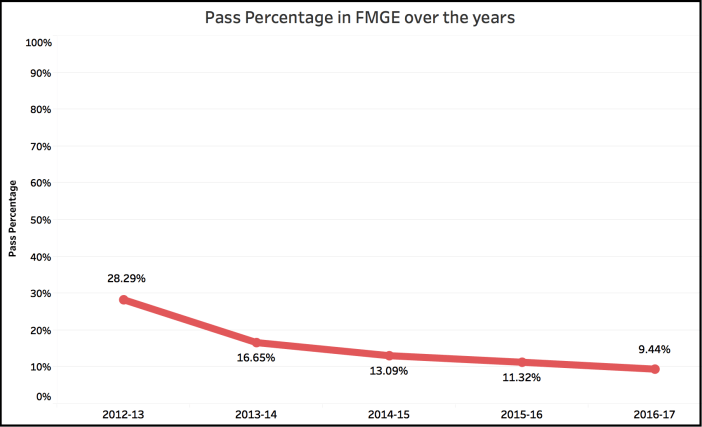 The data on the number of Indian students who go abroad for medical education is not maintained by the government. But, the number of Indian students who take the FMGE with medical degree from a foreign country gives a fair idea of who goes where. The list of countries is dominated by China followed by Russia. Together, both the countries accounted for a little over 30000 FMGE takers from 2012-13 to 2016-17, more than half of all the test takers. Ukraine & Nepal are the only other countries with more than 5000 FMGE takers during this period. More than 100 candidates each, with medical degrees from 18 different countries took the FMGE from 2012-13 to 2016-17. 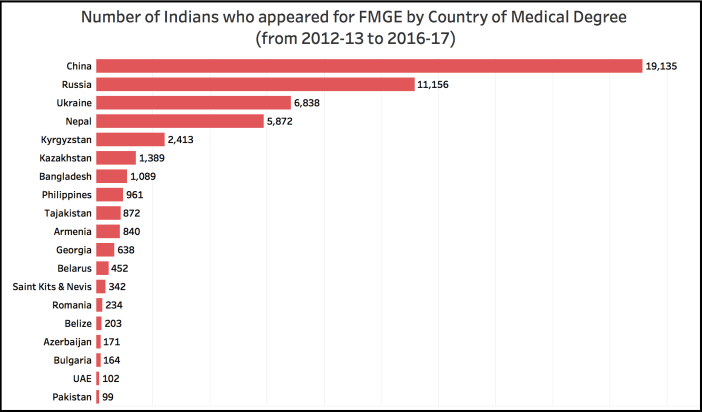 Students with Medical Degree from UAE & Bangladesh perform the best 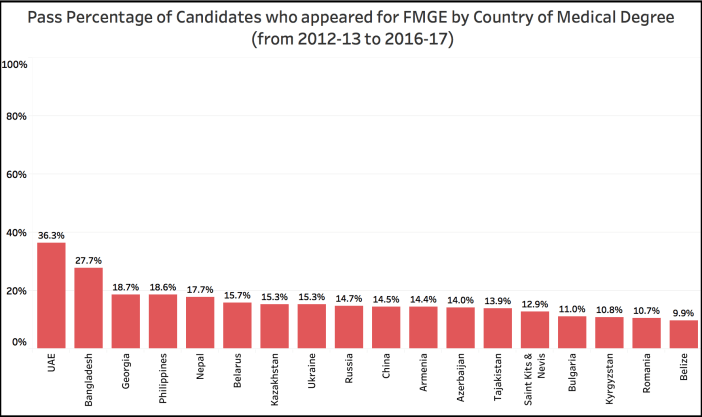 The pass percentage of only 16% is indicative of poor standards of medical education in some of these countries. Students are often lured because of the lower fee and a guaranteed seat. Though the government has issued certain guidelines, the number of students pursuing medical education abroad hasn’t gone down.