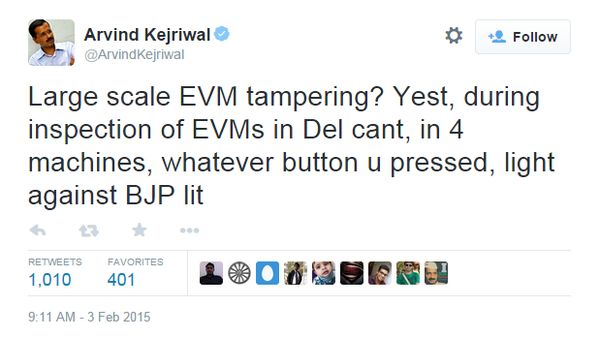 The victory of the Bharatiya Janata Party (BJP) in the recent Uttar Pradesh (UP) Assembly election resulted in the largest vote share in almost four decades. However, the party’s performance has raised the eyebrows of many in the opposition. Arguably, the biggest loser in the state was the Bahujan Samaj Party (BSP) which didn’t even win 5% of the total seats in UP.

Refusing to concede defeat, BSP chief Mayawati has accused the BJP of tampering with the EVMs (electronic voting machines) and skewing the results. Mayawati even wrote a letter to the Chief Election Commissioner of India demanding fresh polls with the use of ballot papers. The outgoing CM of the state, Akhilesh Yadav, echoed her views and said the government should probe the voting machines “if a question has been raised”.

The Aam Aadmi Party chief Arvind Kejriwal also alleged that more than 20% of the votes cast for his party might have been “transferred” to the Shiromani Akali Dal-BJP alliance in the state. “We have five and nine volunteers at booths in Hargobind Nagar and Khemkaran while we got only one and five votes respectively. Where have the votes gone? Who will give reply? This certainly creates suspicion,” he added.

The Election Commission (EC) has dismissed all these claims. The EC highlighted the measures taken to ensure that voting machines were both mechanically and electronically protected to prevent any tampering or manipulation. It said the machine’s hardware and software could not be altered. There is no merit in the claims that EVMs can be tampered with, the EC said, calling such allegations “wild and baseless … Given effective technical and administrative safeguards, EVMs aren’t tamperable and integrity of electoral process is preserved,” the EC said.

Such allegations are, however, not unprecedented in our country.

Some major allegations of EVM tampering

1. In the Brihanmumbai Municipal Corporation (BMC) election on February 21, an independent candidate, Shrikant Shirsat, demanded an inquiry into the counting of votes from the state Election Commission. He claimed that though he and his family members had voted for him, after the results it showed that he ended up getting zero votes.

2. Also in this year’s BMC elections, 15 candidates from different political parties in Yerwada registered a complaint against the Returning Officer (RO) alleging “misappropriation” of EVMs during the counting of votes. They claimed that a total of 33,289 votes were cast but 43,324 votes were counted.

3. Capt. Amarinder Singh questioned the EVM in 2012 during the Punjab election, saying that Akali Dal had tampered the EVM. This time, Ajay Maken of the Indian National Congress (INC) also made similar allegations.

4. The late Chief Minister of Tamil Nadu, Jayalalithaa, blamed the opposition DMK party of EVM tampering in 2001 and even took the issue to Madras High Court.

5. Five days ahead of the Delhi Assembly election results in February 2015, Arvind Kejriwal had tweeted about possible tampering of four EVMs in the Delhi Cantt area. 6. Before 2014, the BJP had complained against the misuse and malfunctioning of EVMs. In fact, Devendra Fadnavis, who is now Maharashtra CM, was present at an anti-EVM event in 2010, where Hyderabad engineer Hari Prasad had demonstrated how easily an EVM could be manually manipulated at various stages. BJP politician GVL Narasimha Rao had stated in his book that “the distrust among political leaders of all hues in voting machines is so high that most losers are wondering if they had been unfairly defeated in polls. It is about time India shunned paperless voting to make its election outcomes verifiable and auditable.”

7. Even Subramanian Swamy had stated in a conference in 2014, how EVMs are susceptible to be rigged easily. The very foundation of democracy rests on principles of free and fair elections and equal voting rights. All these principles would only be able to fall into place if the vote gathering process is transparent enough for the citizens to believe in it.

The questions of rigging or tampering did not arise just because of parties winning or losing an unexpected number of seats, but also because many western countries in the recent years are doubting the integrity of EVMs and bringing back the old-fashioned ballot system. The EVMs are portable and can easily count votes. However, there have been numerous instances across the world where hacking and other forms of tampering have been reported.

The Supreme Court in 2013 had asked the Election Commission to introduce in a phased manner the paper trail in Electronic Voting Machines (EVMs) for the 2014 Lok Sabha elections, saying “it is an indispensable requirement of free, fair and transparent” polls which will restore the confidence of the voters. The apex court had directed the centre to provide financial assistance to the poll panel for the introduction of the Vote Verifier Paper Audit Trail (VVPAT) system with the EVMs.

Almost every other political parties have criticised EVMs but such remarks usually come to surface when they lose elections. The EC should come up with a concrete solution so that it can restore everyone’s faith in the election procedure.