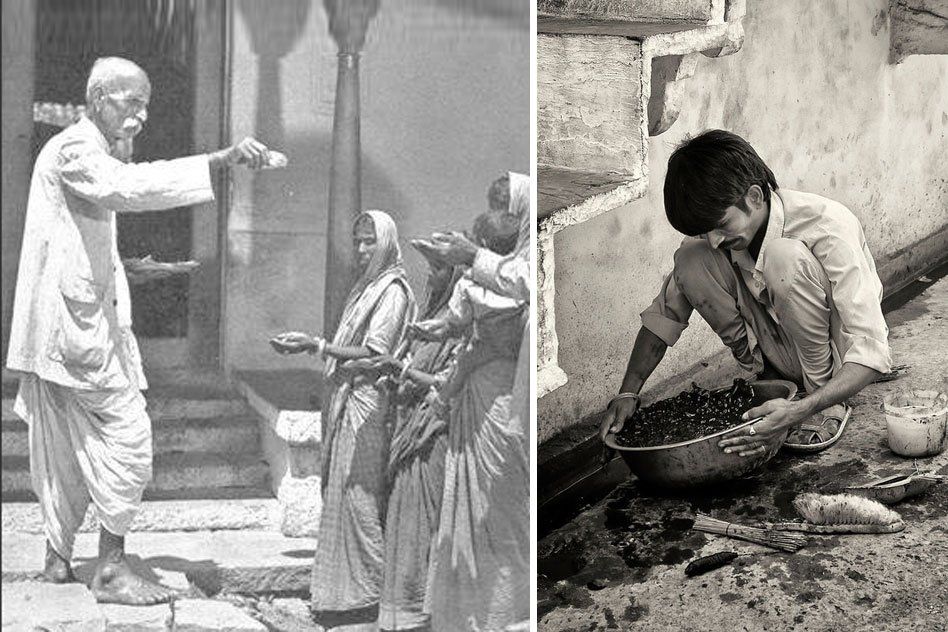 A Brief History Of The Caste System And Untouchability In India

The Caste System And Untouchability In India
As India strives to make great strides in its economy and infrastructure, it is constantly reminded of its social reality that is based on an age-old caste system. The history of India has seen sporadic incidents of discrimination against a particular group of people, mostly under the attestation from the traditional systems of caste and untouchability. The most recent incident is the lynching of Dalits by cow-protection groups in Una, Gujarat. It is interesting and informative to know about the origin of such social stratification that has affected the discourse of Indian society and politics in some manner.

Origins of the Caste System:
The caste system as we see it today has not been pronounced in just one book; infact it has been shaped by multiple texts. The most ancient mention of the caste system is found in the Rig Veda, believed to be developed between 1500-800 BC, where it was called the Varna system. It classified the society into four varnas:

These distinctions were mentioned in the Purusha Sukta verse of the Veda, although some scholars believe that this clause was added much later than the Vedic period. Similar laws were articulated in Manu Smriti, which is believed to be written between 200 BC-200 AD and which served as the guiding text for formulating Hindu laws by the British government. Even Mahabharata, the text of which was completed by 4th century AD, had mentions of the four-tier Varna system.

All of these texts associated particular traits with each class: Brahmins were considered to be pure, wise and gentle; Kshatriyas were linked with anger, pleasure and boldness; Vaishyas were deemed to be hard-working people living off the plough; and Shudras were associated with violence and impurity, worthy of contempt. As such, their social status began to be perceived in the declining order – Brahmins were highly respected and obeyed while Shudras were despised and ordered. Over time, particular castes were placed even below Shudras and were called Avarnas – not belonging to any class. They were supposed to do menial jobs as sweepers, gutter cleaners, scavengers, watchmen, farm laborers, rearers of unclean animals such as pigs, and curers of hides. People from such castes are called Dalits (meaning oppressed) in modern times. Although many of them have moved to other professions over time, yet the general perception against them has remained to be one of hatred and loathe.

Different interpretations:
Some historians and experts of religion have argued that the description of the caste system in ancient epics was different from the system that is being practiced today. According to Patrick Olivelle, a professor of Sanskrit and Indian Religions at the University of Texas in Austin, the ideology of purity and impurity that emerges from literature is concerned with the individual and not with groups. As per his reading of the texts, all four varnas could attain purity or impurity by the content of their character, ethical intent, actions, innocence or ignorance, stipulations, and ritualistic behaviours. He also questions the medieval practice of allowing only the members of first three varnas to study Vedas, claiming that such a restriction of who can study Vedas is not found in the Vedic era literature.

Even the description of Varnas in Mahabharata was based on behavioural aspects rather than hereditary. As per Alf Hiltebeitel, professor of Religion at George Washington University, USA, it is important to recognize that, in theory, Varna is non-genealogical. The four Varnas are not lineages, but categories. As per his reading of the epic, the whole universe was created by Brahma, and it got classified only on the basis of acts or behaviours. Such interpretations show that perhaps the caste system envisaged in ancient literature was not rigid and hereditary, and over time, some corrupt practices may have polluted the original structure of the society.

Untouchability outside India:
The practice of untouchability is often associated with Hinduism and believed to be found only in India. But as per encyclopedia.com, it has been prevalent by different names in Japan (the Buraku), Korea (the Paekchong), Tibet (the Ragyappa), and Burma (Pagoda slaves). Some societies in Islam are also believed to follow a social classification scheme, where Ashrafs are given a superior status owing to their aristocratic ancestary, while Ajlafs and Arzals are confined to menial jobs and are considered “low-born” (source).

Reforms in Modern India:
The barriers of caste continued to strengthen over centuries, until voices of reforms emerged from the colonial India. In the nineteenth century, Jyotirao Phule questioned the discriminatory social system which had rendered lakhs of people poor, ignorant and illiterate. He fought for equal rights and education for lower classes. In early twentieth century, Bhimrao Ramji Ambedkar catalyzed political mobilization of the oppressed. By then, the British had codified castes on the basis of occupation, and had placed the oppressed castes under a list called “scheduled castes”, a term still used today. BR Ambedkar won special political representation for the Untouchables, or Harijans (“children of God”, a term coined by Mahatma Gandhi) from the British. After independence, in the capacity of India’s first Law Minister, he ensured that social equality became a cornerstone of the Indian Constitution.

Post independence, the relevance of caste system in Indian society has certainly reduced but not diminished. Thanks to law, an open display of caste discrimination in offices, markets and places of worship has reduced to a large extent; however, perceptions and prejudices in private matters like marriage and household have continued to exist. People from oppressed classes have been granted reservations in government educational institutes and jobs, which has helped to break traditional barriers of occupation and has brought those people in the mainstream; but at the same time, a debate on meritocracy and “forward-looking” attitude has ensued which goes on till today.

The Bottomline:
There is no denying that caste system has shaped the Indian society for a long time, possibly due to an abridged interpretation of ancient texts and epics. This has given rise to widespread oppression and hereditary entitlements which continue even today. It is to be ensured that the steps taken to undo the harm done by such medieval practices are made more effective and do not create further inequality in the society.

Finally After 5 Years, Trial Begins For Gauri Lankesh's Murder
Ladakh: 7 Indian Amy Soldiers Killed After Vehicle Carrying 26 Personnel Falls Into Shyok River
My Story: 'I Want To Meet The Real SRK One Day And Tell Him How Much He Has Influenced My Life'
Kolkata Model Found Dead At Her Residence, Second Such Incident In Three Days
Similar Posts
X
X