In the last few months, there have been widespread reports of cash crunch in some states like Telangana. ATMs have been running dry in most parts of the state. Data obtained from SBI provides the answer to the ground situation. Between September 2017 and January 2018, the average monthly supply of currency from the RBI to major currency chests of SBI in Telangana, has come down to 1/3rd of the of the average monthly supply of the preceding 10 months.

Amidst widespread reports of cash crunch & dry ATMs in the state of Telangana, Factly filed applications under the Right to Information Act (RTI), both with the Reserve Bank of India (RBI) and State Bank of India (SBI). In both the applications, information about monthly currency supply from RBI to currency chests of various banks in Telangana between the period between January 2016 and January 2018 was sought.

As has been the case since demonetization, the RBI refused to provide information citing an exemption clause in the RTI act. 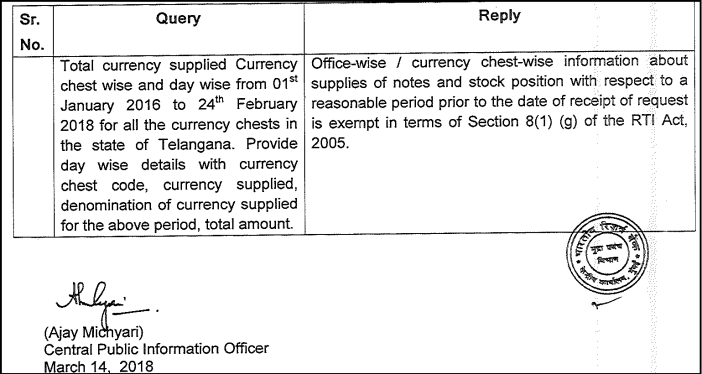 SBI on the other provided partial information. Though SBI said it did not have data of day wise cash supply to its branches, it did provide data on supply of cash from RBI to major currency chests of SBI in Telangana including the one in Hyderabad.

The data provided from SBI had information on the supply of cash including the denomination in which it was supplied. The data was grouped into the following categories for the analysis. 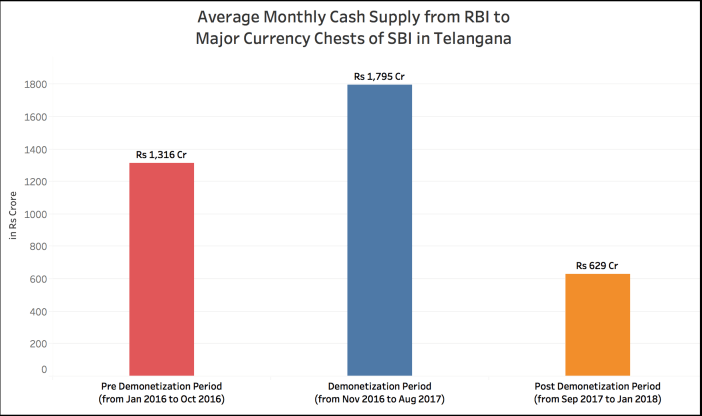 Heavy supply of cash between June & August of 2017

The data reveals that there was heavy supply of cash from RBI to the major SBI currency chests in Telangana in the three months of June, July & August of 2017. In fact, an amount of Rs 5377 crore was supplied in July 2017, more than what was supplied in the immediate aftermath of demonetization in November 2016. After July 2017, there has been a consistent reduction in the amount of cash received leading to the current cash crunch in the state. What is also clear is that more low denomination notes (Rs 200, Rs 100 and other low currency) are being supplied in the last 5 months. 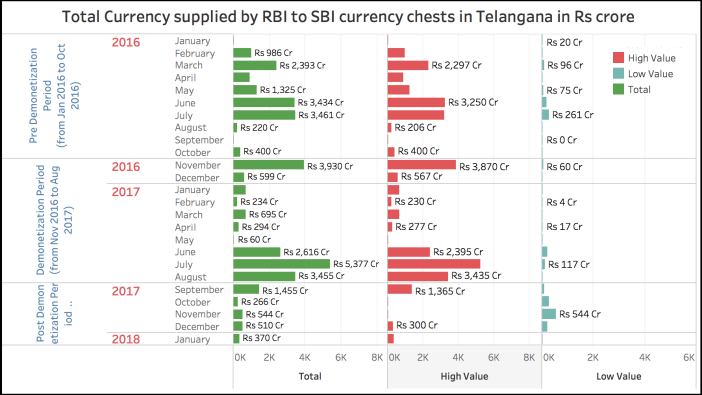 The data clearly indicates that the supply of high value notes like Rs 2000 and Rs 500 has been reducing. This is more prominent in the case of Rs 2000. Not a single new Rs 2000 note was supplied by the RBI between April & November 2017. Even in the case of Rs 500, the supply was nil between October & December 2017. 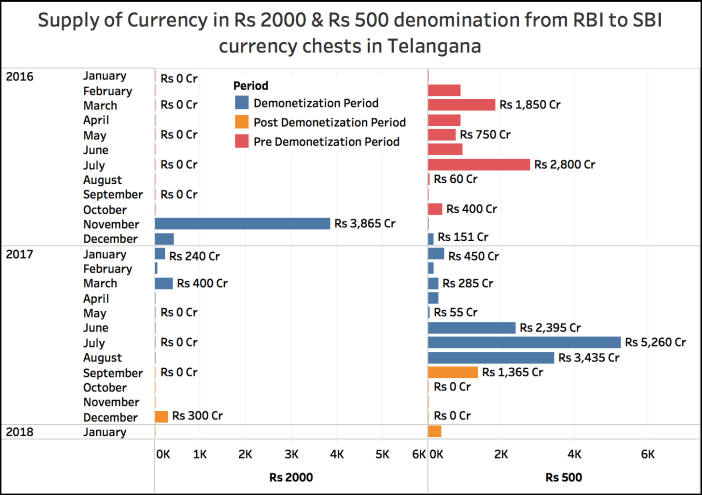 What about cash supply across the country?

Though there is no readily available data to comment on the situation across the country, the government’s answer to a question in the Lok Sabha indicates that the RBI office in Hyderabad received the most currency among all RBI offices in the country between November 2016 and February 2018. If there is a crunch like situation in a state that received the most currency, then the situation elsewhere could be similar. The onus is on the RBI to be more transparent and proactively disclose in the public domain, the monthly supply of cash to various states.