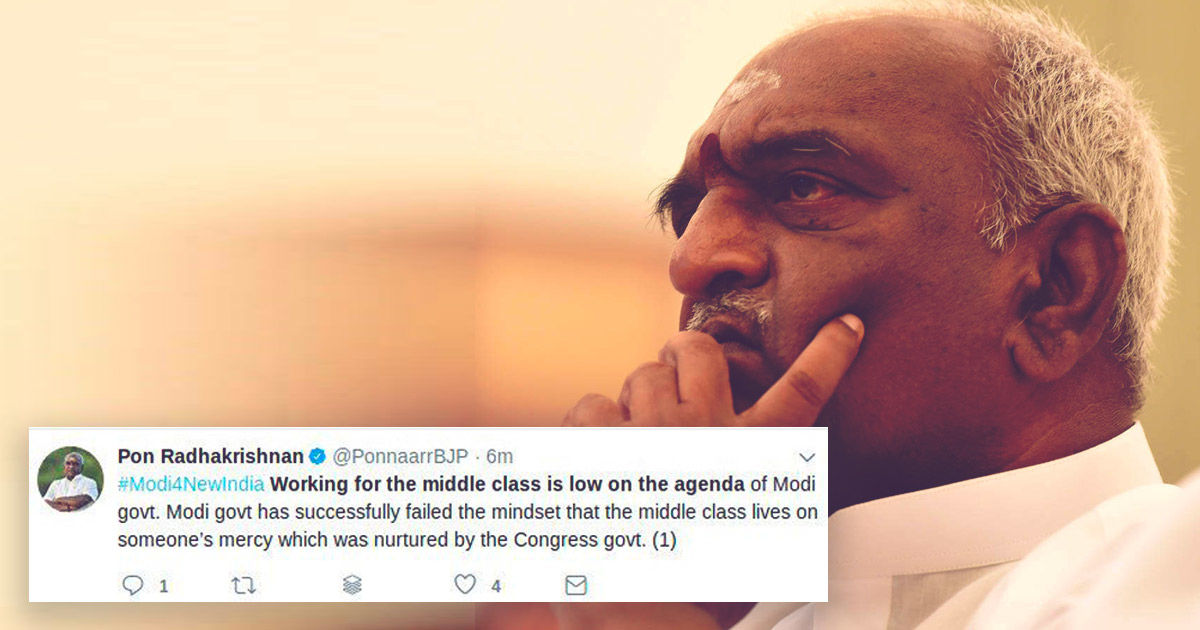 Pro-BJP Handles Including BJP Union Minister Tweet Against Own Party & PM Modi; Know How It Happened

Gone are the days when politicians of the country took the help of interviews to express their concerns on a given matter. With everything getting digitised, our leaders have found a way to table their points without conducting a press conference. Twitter has come as a respite for our politicians who want to avoid any counter questions or embarrassing moments. Without stepping out, the leaders are now able to put their point of view in front of the world through tweets. Nowadays, it is very hard to find any leader who does not own a twitter account. They use these accounts to either take a jibe at their rivals or self-pat on their own backs. Moreover, Twitter has also become a platform for political parties to trend topics to create consensus among public and frame opinion or we can say propaganda.

The morning of February 13, 2019, was a bit different. Not pleasant for the Narendra Modi government to be honest. The Bharatiya Janata Party which knows social media to the core and hasn’t shied away from utilising to its full potential and uses it to talk about their achievements witnessed something uncanny. The twitter handle of BJP Union Minister of State for Finance and Shipping Pon Radhakrishnan criticised the work of his own government (BJP) on Twitter through multiple tweets. One of his tweets said, “Working for the middle class is low on the agenda of Modi govt, Modi govt has successfully failed the mindset that the middle class lives on someone’s mercy which was nurtured by the Congress govt” Many thought that the minister’s account has been hacked as for why the minister is criticising his own government and praising the Congress government. It was not only his account through which a tweet like this was posted, but several other accounts posted the same. What is more shocking is the fact that the official twitter account for BJP Assam posted similar tweets and deleted it after two hours.

How did this happen?

Alt News co-founder Pratik Sinha was behind this and explained how he made the ministers and their followers tweet what one wants. A video he posted on the twitter demonstrated how he edited a trending document allegedly uploaded by the BJP IT cell. Later the same edited text was posted by multiple accounts including that of Radhakrishnan’s.

When The Logical Indian team contacted Pratik Sinha regarding this issue, he said, “ I saw a trending document made by the BJP IT cell being shared on WhatsApp groups. I saw the document and noticed that instead of being in view only mode it was open for edit. I made some minor changes to the document and later saw the same was being posted by several accounts”.

Why is this a concern?

Well to some it might seem like a matter to laugh, however, it is not. One has to understand how anyone can get their hands on these documents and alter it accordingly. From today’s incident, it is substantiated that the accounts of Union Ministers and BJP Assam unit are not handled by the individual themselves and run on IT Cell instructions and they will post whatever there is in the document that is allegedly uploaded by the BJP IT cell. Pratik further added that “While it might seem like a laughing matter, the purpose here is to demonstrate that a non-government entity sitting in BJP’s office is controlling what a Union Minister is tweeting. Even in past also they tweeted from an edited document”.

Though this time, the embarrassment is to only BJP, but someone can make politicians including a Union Minister tweet unconfirmed information against rival parties or even against other nations creating a rivalry.