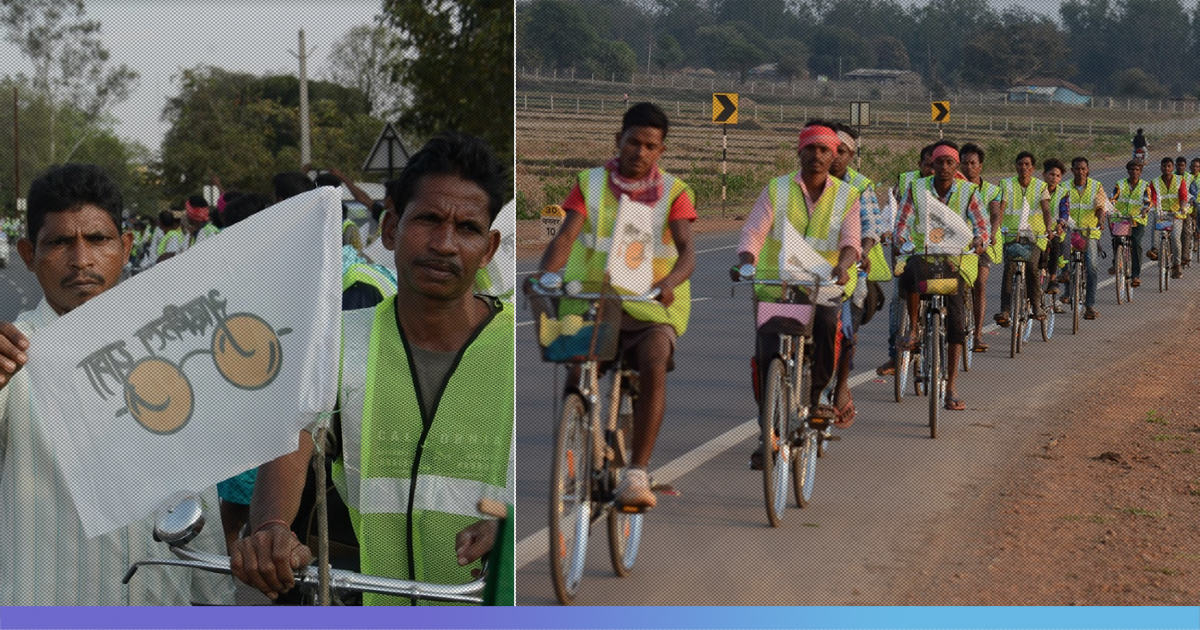 "I Fled Chhattisgarh After My Husband Was Killed By Naxals"; Adivasis Demand Rehabilitation

It was a sight to behold when 300-odd Adivasis and Internally Displaced People (IDPs), donning radium green jackets, touched National Highway 30 and started their 300-km cycle march on February 22 from Danteshwari temple, Jagdalpur in Chhattisgarh. For many, it was their first trip outside their village; the very first time some of them were visiting a ‘bada shahar’ (big city) like Jagdalpur or state capital Raipur.

Though the josh was high and the excitement to traverse across Chhattisgarh on cycles higher, but the IDPs — who had arrived in large numbers from Andhra Pradesh and Telangana – and the Adivasis from Chhattisgarh who participated in ‘Shanti Cycle March’, meant business. The seven-day yatra ended on February 28 in Raipur.

At the conclave, the 200-odd Adivasis from five states – Maharashtra, Andhra, Telangana, Chhattisgarh and Madhya Pradesh – who had walked the entire stretch of 191 km, various journalists, human rights activists, community elders and leaders discussed various issues ranging from Forests Rights of Adivasis, need to strengthen Gram Sabhas, lack of basic facilities like education, medical facilities, roads and proper housing, issues pertaining to wrongful incarceration of Adivasis and rehabilitation of IDPs. It was decided at the end of the conclave that a cycle yatra would be taken out to make an appeal to the government look into these issues at the earliest.

Ganga Madavi, 22, used to live in a village in Chhattisgarh. He was only 8 when one night his family had to flee from Chhattisgarh after violence escalated post-Salwa Judum. Ganga’s two uncles were killed in the violence – that is the only memory Ganga has of his stay in Chhattisgarh. Since 2005 he has been living in Therapaddu — a village 25 km from Chintoor in Andhra Pradesh. “Life here is very tough. We don’t have land in our name. We work as daily wage earners. The money we get is not enough. There isn’t enough water for us or for our cattle. What’s worst, I had to stop my studies because I don’t have a caste certificate. We are not considered Adivasis in Andhra Pradesh because we moved from Chhattisgarh. All of these factors make life extremely difficult. If the Chhattisgarh government provides us with jobs and a house to live in, we would definitely move back to Chhattisgarh. This is the reason why I participated in this cycle yatra.”

Sirmamma Madakkam, 42, used to live with her husband and three children in Sunnaguda village in Chhattisgarh. In 2005, when Salwa Judum started, her “Maoist” husband was detained by the police. They had to flee one night after their house was burnt down. They moved to Ringola village in Andhra Pradesh. They were still settling down when one night her husband was brutally murdered in front of her eyes allegedly for being a police informer. “I had 12 acres land in Chhattisgarh. I had to leave all that behind. I have been through a lot. My kids are all grown up. I want them to participate in this cycle march so that someday we could go back to Chhattisgarh — our home. I hope the state government takes notice of people like us,” she said when we met her in her village just before the yatra started.

The young and the old

Rajman Singh Netam is from Kondagaon in Chhattisgarh. On average, the peddlers had to cycle for 45 km on a daily basis. Netam led the march on most days. What makes this unusual is that he is 61. “It’s tiring, but I want to do this for a peaceful Bastar which has seen violent conflicts for so many years now. It will take time, but we must start somewhere. This cycle march is one such step. It’s important we do this for our future generations.”

Bharat Kumar Turram, 25, lives in Chatti, Andhra Pradesh and works for the IDPs. “It’s for the first time I am travelling in Chhattisgarh. It’s has been a good experience. I learnt so much about tribal culture and traditions. I hope these IDPs and Adivasis get what they want and their suffering ends. Communication is the key and such cycle marches are a great way to interact with them.”

“I want to study more, but I need caste certificate for the same. This is the only reason why I participated in this yatra so that the government does something about it,” says Nandini Kurram, 20, who wants to be a teacher. Her family moved to Andhra Pradesh from Chhattisgarh in 2005 in search of work.

The cycle march ended in Raipur on March 28. A conclave ‘Bastar Dialogue 3’ was organized at Kuru Banjari village in Naya Raipur during which community elders and leaders, journalists and social workers addressed the yatris. Many issues plaguing Adivasis and IDPs were discussed in details. On March 1, the yatris cycled for the last time and toured Raipur city. A dance troupe, dressed in traditional Adivasi attire and dancing to the tunes of drums, led the march in Raipur.

The same evening state excise minister Kawasi Lakhma met with the Adivasis and IDPs and said: “Those who want to come back to Chhattisgarh, we will help them with rehabilitation and those who want to stay back in Andhra Pradesh and Telangana, we will ensure they are recognized as Adivasis and they get caste certificate.” The yatris, who had slogged for seven days, broke into a loud cheer upon hearing this.

Shubhranshu Choudhury, a former journalist-turned tribal rights activist working in the region, says: “There is hope. This Adivasis and IDPs cycled for 300 km with set of demands. I hope the newly-formed government takes notice. These are just some confidence-building measures; the government will have to take some issues up at the earliest – for instance, the release of Adivasis languishing in jails should be expedited.”