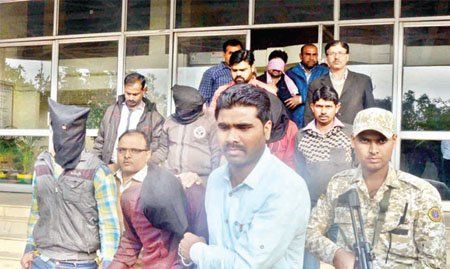 On 9 February, Madhya Pradesh’s Anti-Terrorist Squad (ATS) arrested 11 operatives of Pakistan’s Inter-Services Intelligence (ISI). Since then, it has been alleged that two of the arrested ISI operatives are linked to the state BJP.

All the 11 men have been booked under provisions of the Indian Telegraph Act, besides Section 122 and 123 of Indian Penal Code (IPC), which deal with collecting arms and information for waging war against the country.

The seriousness of the issue.

The tip-off came from two operatives who were picked up by agencies in Jammu and Kashmir in 2016. Sanjeev Shami, ATS Chief in MP, said, “In November 2016, two persons were arrested in the RS Pura area of Jammu, who were passing strategic information and were being given money by Balram of Satna. Our action has come in coordination with central agencies and agencies of other states, and people connected with him have been arrested.”

“We’ve seized hundreds of SIM cards from the 11 men, who were running such parallel phone exchanges in different MP town. The role of employees of some telecom companies too is under the scanner and more arrests will be made in coming days,” said Shami. The MP raid was part of a series of nationwide raids by the ATS. The man apprehended in Satna – Balram Singh Yadav – is believed to be the mastermind of this racket. The spy ring was apparently cultivated in Dubai; the aim of the spies was to facilitate the ISI by providing information about Indian army deployments.

Two ISI operatives, Satwindar and Dadu, were arrested in Jammu in November 2016. They were revealing sensitive information pertaining to defence installations and camps, besides other matters of strategic importance to handlers in Pakistan. Balram’s multiple bank accounts made it possible transactions of money from Pakistan to find its way into pockets of ISI operatives in Madhya Pradesh.

Shami said the racket also involved overseas calls masked as local calls, using SIM cards that were obtained with fake ID proofs This enabled the ISI spies to pose as senior army officers and call up military personnel in Jammu and Kashmir to extract details of strategic operations particularly in sensitive areas near the LoC, ATS sources confided.

The three men who have been arrested from Bhopal and alleged to have been a part of the state BJP unit are namely Dhruv Saxena, Mohit Agrawal, and Manish Gandhi. The BJP initially denied any association with those arrested. BJP president Nand Kumar Singh Chouhan denied any relation, saying, “Naxals, anti nationals and terrorists don’t have any religion and caste. As far as the pictures are concerned, anyone can take pictures with anyone.”

However, the connections soon came to light when photographs emerged of one of the operatives, Dhruv Saxena, sharing the stage with top BJP leaders including MP Chief Minister Shivraj Singh Chouhan. The photos have since gone viral on social media. It has since then been proved that Dhruv Saxena was a District Coordinator for BJP’s Bhopal IT cell. As of now, the detail has been removed from BJYMBhopal website, but it can be found on the archive.

Following this, the state Home Minister, Bhupendra Singh, blamed intelligence agencies for the infiltration of the ISI. He said, “Technology is being used in a big way by anti-national forces and we have seen intelligence agencies are not technologically at par with them. We can say that there was some lapse otherwise how could have this happened.”

It is of grave concern that the ISI could have infiltrated our system so deeply and stealthily; authorities should take strict and immediate action so that national security is not compromised.

It would be best for Home Minister Bhupendra Singh and Madhya Pradesh if he acts and speaks responsibly and maturely.