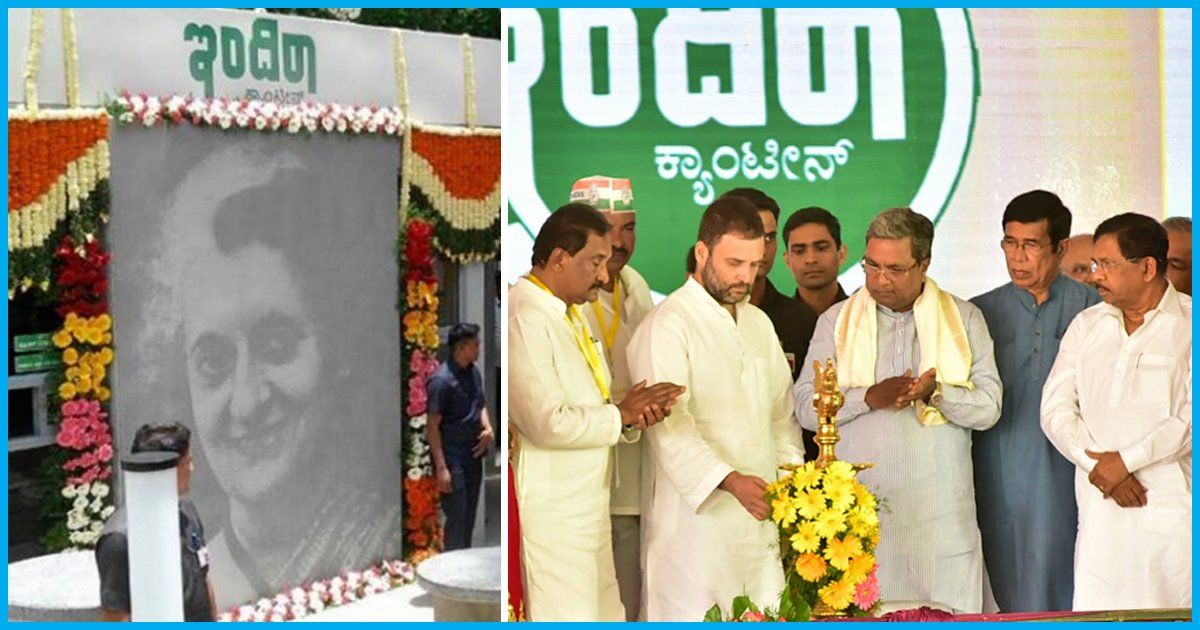 Indira Canteen, aimed at serving the poor at subsidised rates, was inaugurated in Bengaluru on Wednesday by Congress Vice President Rahul Gandhi.

What is Indira Canteen?

This is one of the most ambitious projects of the Karnataka government. These canteens will serve fresh hot lunch and dinner and breakfast at Rs 10 and Rs 5 respectively. CM Siddaramaiah had announced the project when he had presented the budget on March 15. The Bruhat Bengaluru Mahanagar Palike (BBMP) had a deadline of August 15 to launch 198 canteens in all the wards of the city. Poor planning and controversies surrounding the location of these canteens delayed the project, resulting in only 101 canteens to be opened across the city.

Apparently, taking a cue from the popular ‘Amma canteens’ in Tamil Nadu, introduced by former Chief Minister Jayalalitha, it was initially decided to name the project as ‘Namma Canteen’ which was later changed to Indira Canteen to give the announcement a political touch, keeping the upcoming assembly elections in mind.

Rahul Gandhi had the first breakfast in Jayanagar on his visit to Bengaluru on Wednesday and said that Indira canteens would serve migrants who come to the city with a dream to build something. “No person in Bengaluru should ever go hungry and the canteens are a great means towards it,” he said, as reported by The Hindu. CM Siddaramaiah also said that these canteens are a step towards building a hunger-free Karnataka.

Given the shortage of land in the state, in some localities, canteens have come up in parks and playgrounds. Resident’s Welfare Associations in Domlur, Sarakki and Jayanagar have opposed setting up of the canteens as they would invade public spaces. In Domlur, citizens protested against setting up an Indira Canteen in a park. They also faced a similar problem in Banashankari, where the temple authorities had a problem with a canteen coming up next to a temple.

Cheif Minister Siddaramaiah said, “I would like the Government to pay special attention to this fact that the canteen should have excellent food quality, excellent hygiene and people walking out of the canteen must feel that they not only had safe food but tasty food. I think I owe this to every single citizen,” as per The Economic Times. He has also added that the programme would be extended to all district centres across the state.

A total number of 27 kitchens will be set up across the city to cater to these canteens, of which 14 are ready and six of them are in working condition. These canteens will now serve 500 plates of food every day, keeping in mind the budgetary allocation which will be increased in the future.

The Indira Canteen project also has an app which will be launched on Wednesday and it will be available both in English and Kannada. This app will offer choices to search for a canteen, it will also have a list of items on the menu for the day and also allow to locate the nearest Indira Canteen via the usage of maps. The app will help the BBMP track which canteen has the highest demand and will help other canteens in outsourcing the food to the kitchen. It will also have a section on feedback where users can share their ideas about how to improve the services.

How is Indira Canteen different from Amma Canteen?

The Indira Canteen project is a part of Congress Government’s Food For All scheme, however, in a faux pass, Rahul Gandhi called the Indira Canteen as Amma Canteen, according. The Amma Canteen in Tamil Nadu is aimed at aiding the economically underprivileged sections of the society. These eateries are famous for providing low-cost eateries for serving lunch at Rs 5 that includes curry leaf rice or lemon rice. The canteen also provides chapati, curd rice and side dish for Rs 3 and sambar rice for Rs 5.

The Indira canteens will serve breakfast for Rs 5 and lunch and dinner for Rs 10. More canteens will be opened across 97 wards on October 2 to commemorate the birthday of Mahatma Gandhi. The intention behind this initiative was that the quality of food and cleanliness should be at par with the expensive eateries in Bengaluru.

The Logical Indian community appreciates the initiative taken up by the government of setting up Indira Canteens across the city. This scheme, with proper implementation, could help to eradicate hunger from the state.