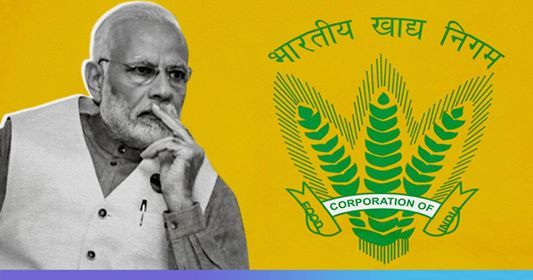 In the five years of the Bharatiya Janata Party rule, the debt of Food Corporation of India(FCI), a government-funded organization that regulates the food prices; distributes the foodgrains to the poor household, and works closely with the Public Distribution System, increased three-fold.

The debt levels intensified in 2016-17 when the government decided to start giving credit to the FCI from the National Small Savings Fund (NSSF).

However, in the last few years, the government slumped the portion of the budget that was needed to be allocated as food subsidy to FCI. Hence, to compensate for the shortfall, the FCI started borrowing from the NSSF every year. As of 31 March 2019, Rs 1.91 lakh crore of the FCI’s debt is through the NSSF, according to the government’s own data.

Multiple other factors also contributed to the rise of FCI’s debt. The implementation of the National Food Security Act, 2013, increased the number of beneficiaries under FCI while reducing the sale price of rice and wheat. The procurement prices of such foodgrains also increased for the FCI.

With the rise in minimum support prices and the number of beneficiaries, FCI fell into a deep debt trap.

“The FCI buys high and sells low, managing on subsidies paid by the government. India’s food subsidy bill has risen rapidly, doubling in six years (Rs 1.7 lakh crore in the financial year 2018-19, or 0.9 per cent of GDP). Yet, India’s food subsidies have remained relatively stable as a percentage of the GDP,” said a Bank of America Merrill Lynch Global Research note in August.

“The government has struggled to pay these subsidies recently and has released amounts much lower than the funding shortfall at the FCI,” it said, adding that the government may have close to Rs 2 lakh crore of unpaid /carried-forward subsidies to the FCI.

“The FCI has no inherent cash flows with which it can repay its debt. A reduction of inventories will only partly help in deleveraging. The government of India must at some point provide the FCI with the Rs 2 lakh crore in unpaid dues,” the note pointed out.

(Inputs from The Print)