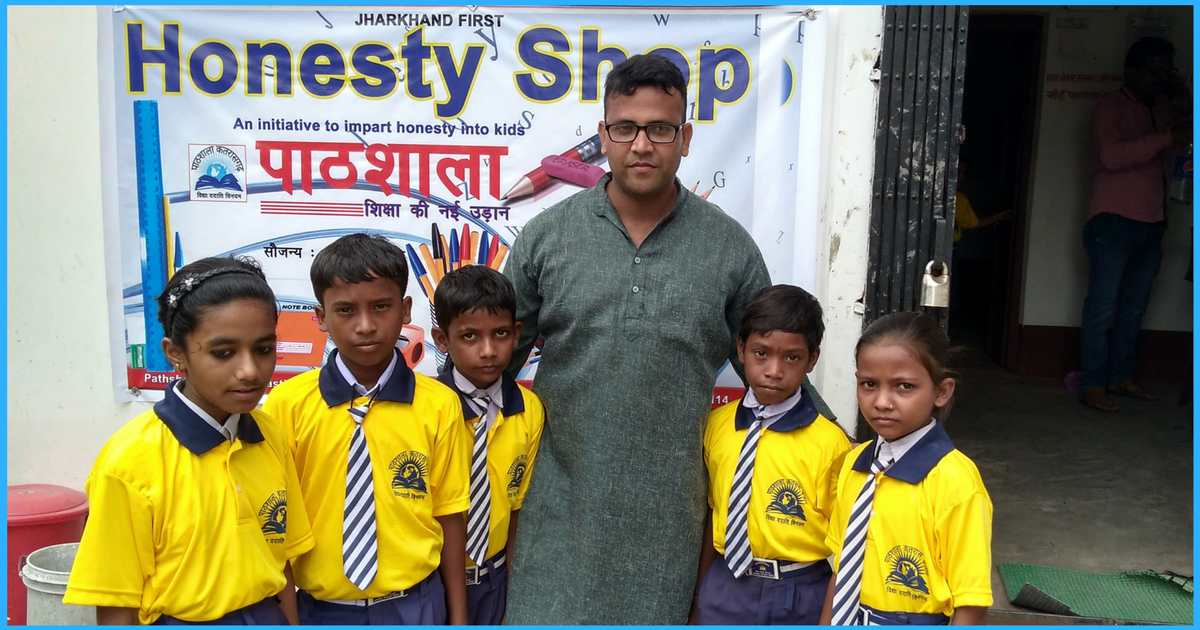 Would you believe that children are capable of managing themselves with integrity in a school? Not just young children but children who come from impoverished backgrounds, where every rupee is hard to come by will be honest and won’t take advantage of a situation where children can take anything from the school store and place the cost in the cash box nearby. Would you believe that such a thing can happen? Dev Kumar Verma has made this a reality in his school Pathshala. Dev Kumar Verma was once attending an election duty in his village Katras, Dhanbad the venue for the election was a government school. In the desk were some leave letters written by nine and ten standard kids. He was shocked to find many spelling mistakes in the leave letters. Further, what shocked him more was the teachers accepting the leave letters without asking the students to correct the errors. In spite of taking up the matter to the CM, no concrete steps were taken by the government to address the issue. The sad situation of education in the school drove him to take start Pathshala school.

How did the Pathshala begin?

It was then that he and his wife Priyanka Verma decided to do something concrete to address the issue at our own capacity. Children need better learning, responsibility, values and independence. This is the moto with which Dev Kumar Verma started a tuition point for kids in his ancestral home which quickly became a full-fledged school, Pathshala for children up to class 5 as support from kids, parents and friends poured in. He converted his ancestral home into the school and soon turned it into an English-medium school.

Pathshala has all basic facilities such as dedicated teachers, separate toilets for girls and boys, a playground and water connection. He has also arranged auto- rickshaws for students residing in far- off places. He feels that even the poorest of poor should have access to good educational facilities which are at par with the ones in the big metros without having to pay any fees.

When The Logical Indian spoke to Dev Kumar, he said “ We thought, if we are able to make a difference even for a single student that is enough for us. What began as a small tuition point in 2014 became a full-fledged school by Mar 2015.” Dev felt this need all the more because he came from an impoverished background. He saw the struggles his father as a labourer needed to undergo to educate him. He thus wants children and their parents to not go through the battle that he endured in his life.

He wanted to extend the support he got from his uncle in pursuing his studies to all other kids in his village, to begin with. He thinks if he charges children fees even if it is a nominal amount then he won’t be very different than other private players in the market. It’s exploitative in his opinion. His desire to give back to the society to uplift the people is immense which is why almost 35-40% of his salary goes towards this school.

While the financial aspect takes care of one dimension of the problem, there is another crucial aspect that Dev believes that practical examples, role models in the society, attractive teaching through excellent storytelling are the ways forward for good teaching. He strongly believes that this is extremely crucial because he felt a void in his school life and longed for it when he was growing up.

Inculcating values among the children

Good teaching is essential to ensure kids imbibe the educational content as well as values. To inculcate honesty in kids, Dev made brand new school essentials at 20% of the original price in the stationary shop. The name of this store is ‘Honesty shop’. Kids need to take the required stationary and pay the cost of the book into the box by themselves. In the beginning, Dev found that few kids are taking two pencils but putting the price of 1 pencil only in the cash box. They then started teaching what honesty is all about vigorously in the classrooms. They slowly started seeing the transformation. Now every student puts exact amount in the cash box. They also found that these results are more long lasting as there have been instances where children have requested their parents to not fight for money which is fleeting.

More and more children are now want to come to pathshala since kids are now doing well in competitions which include arts & crafts, science competitions, elocutions etc., The Parents are more than elated to see their children getting English education for free, which they would not have been able to afford otherwise.“I am happy to see my son Mohit learning English, he is teaching English alphabets to his friends” said Saraswati Devi, a household worker who clean the houses.

The school faces stiff competition from other established schools which try to lure children away by promising no fees but later on insisting kids pay fees. When kids were not able to pay fees they drop out of that private school. Dev reaches out to those students and assure them that they can join his school again. Dev Verma is opening a second school by next academic year in Bhagabasti, which falls in the coal belt region. This school is basically for those kids who are engaged in Coal theft .

The Logical Indian community applauds the tiresome efforts which Dev puts in educating these children from the underprivileged sections of the society. He is an inspiration for many of us.

For more details, visit Pathshala’s Facebook page or you can write to Dev Kumar Verma at [email protected]

Also Read: This Tribal Village Is On A Mission To Become The First English Literate Village Of India With The Help Of Their Local Language