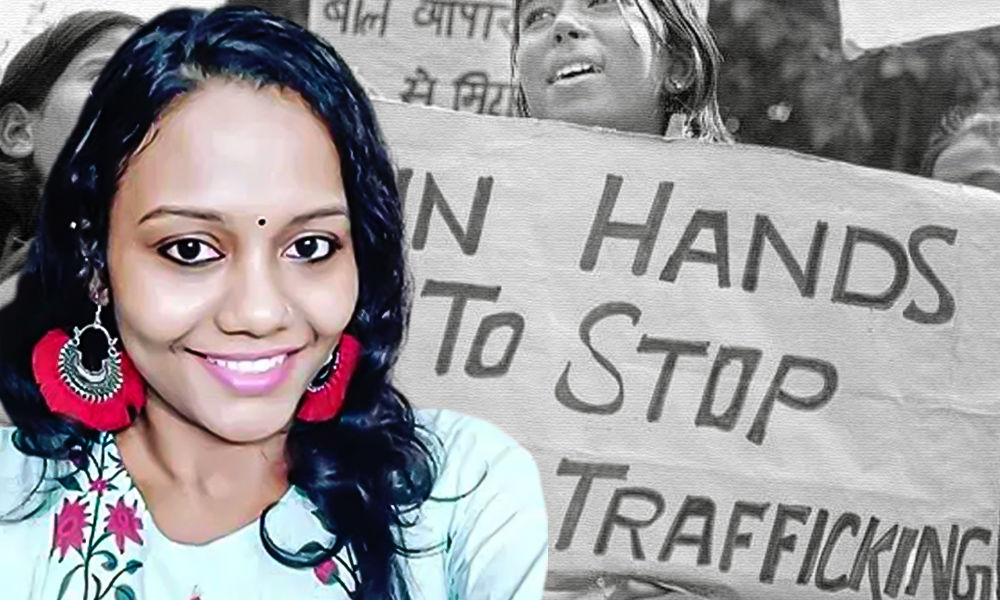 Rescuing trafficked victims should not be the end goal but to work on finding solutions to end the nexus, says Pallabi Ghosh, a young woman with a zeal to end human trafficking in India.

Human trafficking is the illegal trading, buying, and selling of humans for exploitative purposes, which include forced labour, marriage, slavery, organ donation or pushing them into prostitution.

As compared to 2017 and 2018, human trafficking incidents in India hit a three year high in 2019. According to the recent National Crime Records Bureau (NCRB), a majority of the cases were reported from Maharashtra, Delhi and Kolkata.

But why are humans trafficked? "To make easy money," said Pallabi Ghosh.

Pallabi, a resident of New Delhi, is a human rights activist and has headed numerous rescue missions and anti-trafficking efforts across the country. For the past nine years, she has been helping to rehabilitate the victims and empower them to lead a life with dignity.

"I graduated in English literature, and in 2012, I moved to Delhi to pursue a master's degree in Gender Study. I did not intend to get into rescuing trafficked victims, but one of my acquaintances, a lady, was working to stop second-generation prostitution in the region, which was not to let the children of sex workers get into the same trade. After connecting with her, I came across several anti-trafficking NGOs and started working with one of them. I wanted to understand what forced women into brothels—choice or chance. I wanted to get into the root cause of this vicious cycle," she said.

After working with them, reading and researching about them, she realised that a majority of them were trafficked.

"Being a part of a dysfunctional family is one of the primary reasons, and no one wants to talk about it. Some of the states such as Jharkhand, Chhattisgarh and West Bengal rank very high in vulnerability for human trafficking. The families in such states face difficulties to make ends meet and hence both the parents are compelled to work. At times, the younger sibling is left to the care and attention of the older one. This responsibility deprives and restricts them. During this time, if a stranger approaches them and is merely nice to them, the kids end up being drawn to the person," Pallabi told The Logical Indian.

She further said that people who end up in the trafficking trap are usually from the marginalised section. A few days ago, Pallabi and her team rescued few children from Bihar who were put in an orchestra band to dance and were made to put up for sexual services.

"Children are being trafficked to engage in the fast fashion industry. Popular fashion brands are always on the lookout for a cheaper source of labour. The children are picked up and forced to work under appalling unhygienic conditions that result in modern-day slavery. Men are trafficked. Everyone is underpaid and exploited. Placement agencies are another scam. Whether women, girls or men, people are offered the temptation of a well-paying job in a metropolitan city. Trafficking is not just limited to brothels or begging on the streets, it happens every time a person is falsely lured for a better future— job, marriage or lifestyle," she said.

Pallabi explained that there exists a notorious division in the trafficking industry. For women and young girls, physical attributes play a crucial role to determine their positioning. For the ones hailing from West Bengal, Nepal and northeastern states in India, on account of being fair, they are put into the sex trade or forced marriage. Meanwhile, the ones from Jharkhand and Chhatisgarh are put into the labour market as they are dark-skinned, according to the activist.

"Things have worsened amid the COVID-19 pandemic. The ones who had a steady job and were not into the business of trafficking are unknowingly being trapped to do activities for extra income. People are tricked into engaging a conversation with girls from small towns and eventually ask them to move to the big city. The person who makes the call might do to earn extra bucks without knowing the nexus, the innocent girl is trapped and moves to the city. Only to come to be welcomed by a person, she does now know. That's how trafficking occurs," Pallabi explained.

She said that rescuing trafficked victims should not be the end goal but to work on finding solutions to end the nexus."My objective is not to increase the numbers. I want to work to address the cause, which could be poverty, unemployment or illiteracy. Logo ke paas khana nahi hai (People do not get access to two square meals a day.) Jab khana nahi hota hai toh kuch nahi sujhta hai (One cannot think rationally when forced to survive without food.) Hence, if I rescue one child, I have to make sure that the kid is properly rehabilitated. There is a greater chance of getting traffic again."

One of the trafficked survivors reunites with her family. Image Source: Pallabi Ghosh

At times, Pallabi has been on the receiving ends while conducting rescue missions. She shared incidents when she was heckled and threatened with dire consequences. However, this has not discouraged Pallabi from putting her life at risk to save a number of lives.