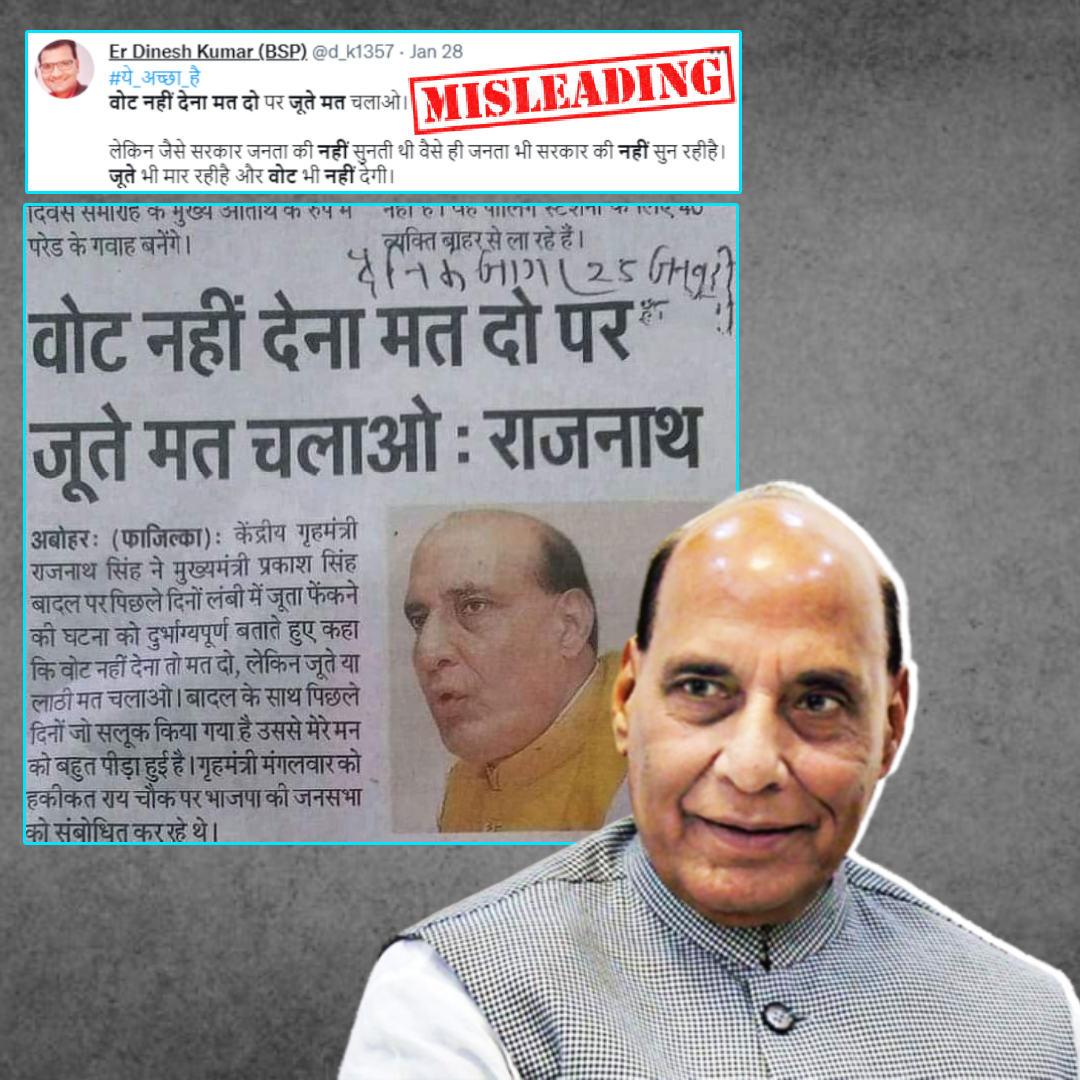 "Don't Vote If You Don't Want To, But Don't Throw Shoes" Old Statement Of Rajnath Singh Viral As Recent

Rajnath Singh made this statement back in 2017 when he condemned the incident of shoes thrown at the rally of the then Punjab Chief Minister Parkash Singh Badal.

[English Translation: If you don't want to give vote to us, don't vote but don't throw shoes. But just as the government did not listen to the people, in the same way, the public is not listening to the government. Citizens are hitting them with shoes and also will not vote for them. We strongly condemn this.]

[English Translation: Rajnath Singh is saying don't vote but also don't throw shoes. This thing is also for Rajnath Singh ji that if you don't want to give job, don't give job but don't get youths thrashed by police. Movement is a constitutional right of every citizen. Due to the oppression of the government, many got injured and their bones were broken.]

Defense Minister Rajnath Singh recently said that it is fine if you don't want to vote but at least don't throw shoes.

The Logical Indian Fact Check team verified the claim and found it to be misleading. The viral statement was given in 2017.

We then read the newspaper clip carefully. According to the report, "Union Home Minister Rajnath Singh termed the incident of Shoe throwing at Chief Minister Parkash Singh Badal in Lambi as unfortunate and said that if you don't want to vote, don't vote but at least don't throw shoes or stick. It is to be noted that, 'Chief Minister' is written before the name of "Prakash Singh Badal". However, at present, the Chief Minister of Punjab is Charanjit Singh Channi.

Taking a clue from it, we did a google keyword search and found this statement in a report of NDTV and Jansatta dated back to January 2017. According to the reports, Rajnath Singh had given this statement during the election campaigning in the Abohar area of ​​Punjab. Union Home Minister Rajnath Singh campaigned for BJP-SAD in Punjab for the 2017 Punjab election. While addressing an election rally, he condemned the incident of shoes being thrown at the rally of the then Chief Minister Parkash Singh Badal. During his speech, he also blamed Pakistan for drug abuse in Punjab.

News Agency ANI had also tweeted his statement back then.

It is evident from our investigation that Rajnath Singh made this statement back in 2017 when he condemned the incident of shoes being thrown at the rally of the then Chief Minister Parkash Singh Badal. It is being falsely shared by linking it with the upcoming state elections. Hence, the viral claim is false.