The Logical Indian Fact check team investigates the media reports that claimed that a goat was arrested by Kanpur Police for not wearing a mask.

On July 27, headlines on several news portals read that a goat was "arrested" by Kanpur police for not wearing a mask.

"The #Kanpurpolice 'arrested' a goat that was roaming in the Beconganj area 'without wearing a mask'," reads the tweet by IANS, which was followed by a news article too.

The #Kanpurpolice 'arrested' a goat that was roaming in the Beconganj area 'without wearing a mask'.

The incident took place over the weekend and the Beconganj police picked up the goat and took it to the police station in a jeep. pic.twitter.com/ny48Sfr0zV 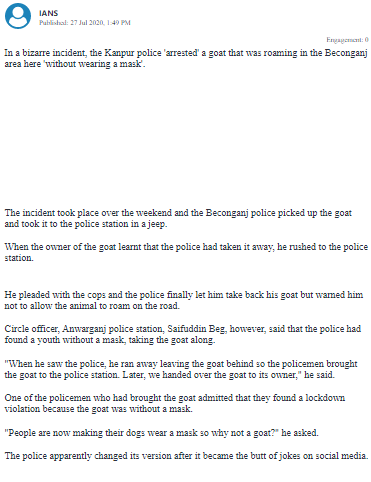 The story was subsequently picked by mainstream media. Below are the reports by media houses on the story:

A goat was arrested for not wearing a mask in Kanpur.

Video clips showing a goat being pushed inside a police van was being circulated online with the claim mentioned above. A Twitter user tagged the Kanpur police in one such post and said that a person has accused Beconganj police of forcibly taking away his goat.

Kanpur police from their official Twitter handle replied that an unclaimed goat was roaming around in the Dada Miyan intersection amid the lockdown. The animal was taken to the Beconganj police station and handed over to its owner Khanikujjma. Police further added that all the allegations are false and unsubstantiated.

Though the headline by IANS gives the bizarre picture, inside the IANS article a statement by the Circle Officer, Anwarganj police station, Saifuddin Beg gives a clearer picture. IANS had reported that as per Beg, a youth was found without a mask taking the goat along and he left his goat behind when police tried to catch him. "When he saw the police, he ran away leaving the goat behind so the policemen brought the goat to the police station. Later, we handed over the goat to its owner," the officer was quoted by IANS.

The Logical Indian also reached out to Anwarganj police station Circle Officer, Saifuddin Beg, who was mentioned in the IANS report.

The Circle Officer rubbished the claims and said that "Common sense dictates that an animal cannot be arrested, there is no such law."

He reiterated again that a man without a mask was walking with a goat. The police wanted to catch him but he fled, leaving the goat behind. The goat was later returned to the owner.

Therefore, a goat was not arrested, it cannot be.

Also Read: Fact Check: 'Drone Boy' Prathap Made Fools Out Of Media, Misappropriated Other's Works As His Own